Julian Schneyder, 19, 6’2”, is officially fashion’s most sought-after male model of the moment. 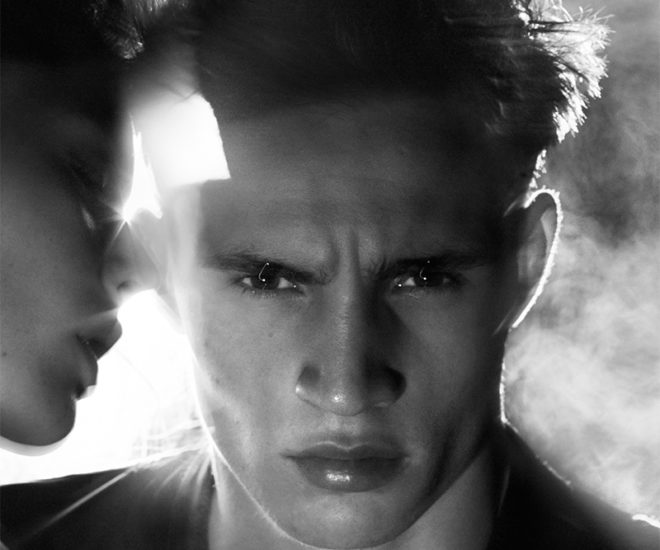 “Is this the weather here?!” Julian Schneyder asks excitedly, as the stifling heat and humidity of a warm March morning in Singapore (Schneyder is here for a shoot and chat with our friends at L’Officiel Singapore) hit our faces the moment the sliding glass doors at Changi Airport open. It’s a welcome change of weather from the 4ºC temperatures he’s been facing in his hometown of Vienna, Austria. Although his 13-hour flight from Zurich touched down just 20 minutes ago, and it’s 6am on a Saturday morning, Julian is wide-eyed and ready to go. Where does this zeal originate?

Perhaps it’s the wonder of youth (the 19-year-old is preparing for his high-school final exams in June); or maybe it’s the fire he’s developed from being 12 years a judoka (he’s a member of the Austrian national judo team). But we think it’s most likely the euphoria he’s experiencing from a meteoric rise to the top of the fashion game: In less than two years, he has walked countless shows (including three for Versace), landed a campaign for Dsquared2, and is now the face of Calvin Klein Underwear Spring/Summer ’16. As Julian and I make our way to his hotel for breakfast, his strapping 1.88m frame belies his childlike enthrallment of this city – “Wow! All the buildings are so tall here!” “It’s really clean in Singapore!” “How many people live here?” “Is that the sea?!” – as he whips his iPhone out to snap the Singapore Flyer and Marina Bay Sands. Later, over a mound of fried noodles, sausages and bacon (yes, he eats whatever he wants), Julian opens up about his deep passion for home, judo, deep house, and roast pork. How did you get into modelling?

A good friend of mine, who was also a model, told me I had the potential to be one too, so he brought me to Wiener Models – my mother agency now – to see Kosmas Pavlos (the agency’s director), who signed me on and flew me all over the world. And now, here I am! I was always a part of the sports scene; I never thought I was “beautiful” enough to be a model. (laughs) But now, I really enjoy being part of the creative process at a photo shoot, working with such amazing people to create art.

You get tons of comments about how “gorgeous” and “stunning” you look. Do you take compliments well?

I like all the comments about how “beautiful” I am, but I much prefer being loved for my character than my physical appearance. When I go home to Vienna, I immediately make it a point to meet my old friends because they know me the best, and like me for who I am. A beautiful person doesn’t have to be physically attractive; he or she has to inspire me when they start talking and make me go “wow, you’re really cool” – that’s beautiful. There is no diet! Judo is my diet. (laughs) There are too many good things out there for me to pick a favorite food, but I always appreciate a really, really good burger. When I’m home, one of my favorite things to eat are Austrian specialities, like schweinsbraten (roast pork) served with mashed potato rolled into balls and covered in gravy. It’s really full of fat but tastes so good – my mother and grandmother cook it.

There’s a lot of waiting involved in modeling. How do you keep yourself occupied?

With music, usually. I used to do a bit of deejaying in some clubs in Vienna. I really like deep house and techno, and artists like Skrillex and Diplo. And hard rock; I love Led Zeppelin (whom I listen to every day) and The Rolling Stones. But not metal – that’s a bit too much. (laughs) What were you like as a kid? Were you well behaved?

No! Not at all! (laughs) My younger brother (Sebastian, also a judoka) and I were completely over-active and always getting into trouble. Taking up judo when I was seven was a good outlet for all that excess energy!

You’ve been doing judo for 12 years now. What’s been your proudest moment?

Coming in third at the 2014 Youth Olympic Games, and third at the 2014 European Championships. I’d like to get back to judo again this year and become as good as I used to be, and then hopefully qualify for the 2020 Olympics. Training is tough. Judo is a beautiful sport but it’s a fighting sport, so it’s always combined with a lot of pain, but I’d like to do it for as long as I can. You were born and bred in Vienna. What’s your favorite thing about the city?

When I’m modeling, I’m always working in the world’s biggest cities, so my favorite thing about Vienna is that it’s a small city, a good place to calm myself down, free my mind and rest. A perfect day off is hanging out at a friend’s flat and catching up with all my old friends. When I talk to them, I’m a normal boy again. I love going on road trips with them to the south, just driving all the way to Italy or Croatia. We turn our phones off and just have time to ourselves. Going home is like taking a holiday, because I’m always abroad. I’m so happy when I can stay a whole month in Vienna – that hasn’t happened in a really long time. I’d love to visit Hawaii and Bali, though; I love the sea!

When you were a kid, what did you want to be when you grew up?

I always wanted to be an astronaut, that was my dream, but it’s not realistic. (laughs) I also wanted to be a pilot, but then, as I started travelling for modelling, I changed my mind, because I could never endure sitting in a small cockpit for hours and hours! Realistically, my dream is to be a doctor of sports medicine.

So, are you a model who is a judoka or a judoka who models?

That’s a really good question! (pauses) At the beginning of my modeling career, I was a judoka who modeled, but I think things have changed now. I’m more of a model who does judo. But I hope it eventually becomes 50-50, so that I can pursue both in equal measure!