The Spring/Summer 2017 season has designers experimenting with adventurous textile choices and fabrics not commonly associated with the season. 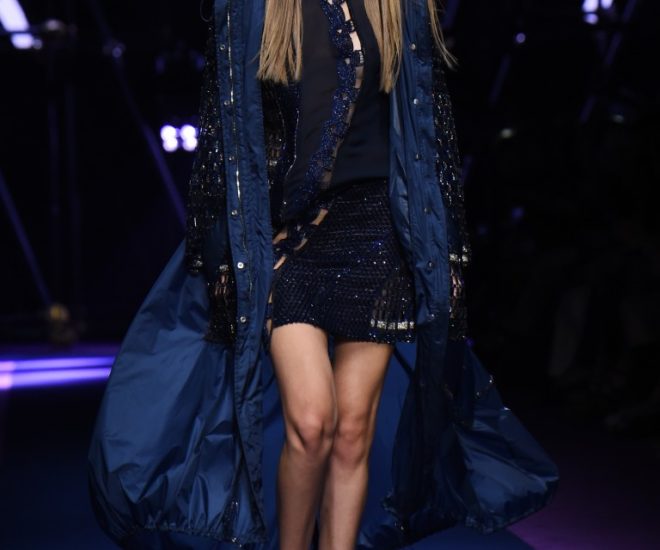 The Spring/Summer 2017 season has designers experimenting with adventurous textile choices and fabrics not commonly associated with the season. Aside from the usual club of classic cotton, linen, wool, denim, knits, silk and synthetic materials, here are the more alternative attractions: This key trending fabric was interpreted in two different ways for SS17: romantic or mysterious. Chloé offers a romantic style, with light colors and a dash of bohemian vibe. Jacquemus used tulle to create voluminous miniskirts, and paired it over loose fitting pants. Lace material also complements tulle on several iterations.On the mysterious side, comes Christian Dior (above) and Saint Laurent with their darker offerings. Other designers who showcased tulle-powered creations were Rochas, Giamba and Hood by Air. Both are favorites from many seasons, but the rock ‘n’ roll fabric duo were the stars of the SS17 collections. It was interpreted in almost all forms – from coats and dresses to tops, jackets, skirts and pants. Black reigned supreme but there are varieties in khaki and midnight blue, for example at Sonia Rykiel. Dior presented leather tops and skirts, while Saint Laurent showed asymmetrical leather dresses. All the usual suspects added leather to their collections: Versus Versace, Jeremy Scott, Louis Vuitton, Salvatore Ferragamo and Bottega Veneta (above). Meanwhile, Vinyl was notably present at Kenzo (below), Lanvin and Topshop Unique. SS17 was glamorized through the use of lamé and metallics at the four fashion capitals. In the past, lamé was frequently used as a supporting player but this season, it became the main character. The material can give a futuristic, tough chic vibe, but can also be ultra feminine. Saint Laurent (above) used lamé for its pleated dress, while Wenda Nylon created lamé dresses, skirts, jackets and pants. Balmain and Elie Saab also utilized lamé to bring out the glamour. With the rise of the streetwear and athleisure trends, nylon became a favorite of designers and ateliers. The sporty side of nylon was spotted on the runway at Stella McCartney (above), Anne Sofie Madsen and Versace. Givenchy used nylon to highlight its signature masculine/feminine style on its jacket and pants (obviously in black, by the way). Aalto also previewed dresses and jumpsuits in nylon.

Fur in the Summer Integrating the fall/winter fabric in pieces made for the sun was an emerging trend, as seen in Miu Miu with its fur collars and multicolored coats. Fendi (above) evidently jumped onboard the trend with a handful of pieces, notably a stripe print fur, and Prada stood out with its fur-finished shoes.