Marking 50 years in Formula 1, the collection is a marriage of car and luxe craft, and it is very athletic and elegant. 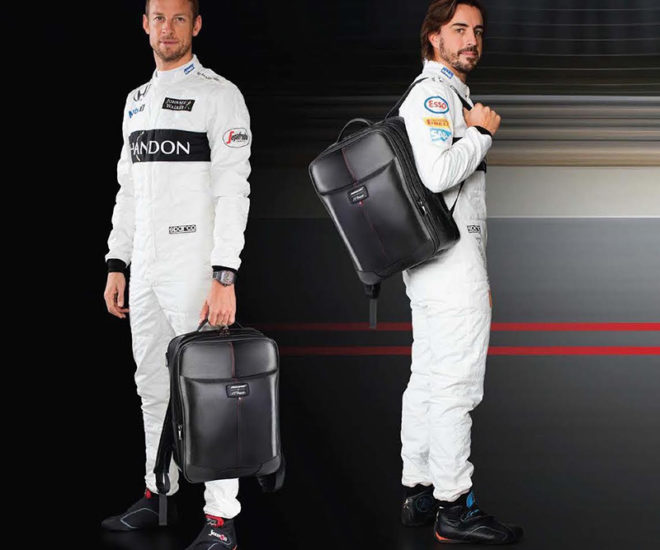 It is simply not enough to carve out a niche in luxury and expect to get recognition anymore. In a world where novelty is increasingly the catchphrase, it takes a lot to stay on top – and ST Dupont plays the game well. For evidence, one need only look at its past collaborations, where unexpected names – think Iron Man and James Bond – call themselves partners. Thus the choice of automaker McLaren as collaborator is somewhat conventional even.

2016 is a special year for the sports automobile brand. Marking its 50th anniversary in Formula 1, McLaren for its part uses this partnership to commemorate the occasion. Fronted by famed racers Fernando Alonso and Jenson Button (who have at least 250 races to their names, individually), the Defi collection is one geared to satisfy both grand prix enthusiasts and luxury lovers alike. For starters, we’re looking at a backpack and a shoulder bag-cum-document holder, both fashioned from calfskin and perforated black leather with red contrasts. The best part: they can both store laptops (form meets style, everyone). The seven-item collection also comes with a wallet, credit card holder, passport cover, cufflinks and a pen. Devil’s in the details, with items bearing the McLaren and ST Dupont logos, a sleek black look and the occasional flourish of McLaren red and tricolor French flag motif. It is the best of both worlds, literally.

In further justification of their collaboration (although, really, is there a need for such awkwardness?) the Defi line is indicative of both companies’ aligned passions: a unified pursuit of innovation, performance and excellence. Given its Formula 1 heritage, McLaren can hardly have even participated without the aforementioned virtues. For ST Dupont, having a history stretching back to 1872 speaks positively to the performance and excellence bits. Honestly, to be able to keep the world talking about a collaboration – where similar partnerships are abundant everywhere – is a mark of expertise. Just give to us, stat.