The owner has listed the entire historic village, which comprises about 50 buildings, for $44 million. 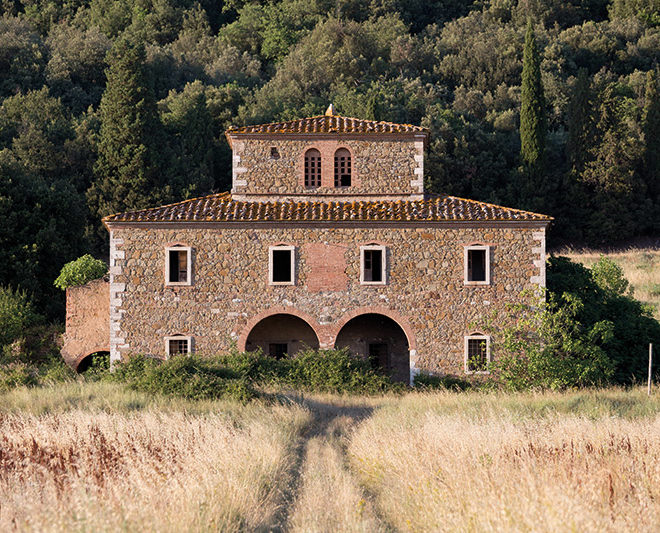 During the summer months, the Tuscan countryside is drenched in sunlight, a golden honey-colored hue that spills over the hills and catches on the stone sides of farmhouses, medieval castles and historic villages. One such village, Poggio Santa Cecelia is perched on a hilltop in the coveted stretch of land between Florence and Siena and includes characteristic medieval features like stone arches, narrow streets and a tall city wall. To access the borgo, one must step through an imposing gate set in an entrance of travertine stone and topped with coats of arms.

The views from the village look like a quintessential Tuscan postcard: Cyprus trees and rolling fields of green and amber. However, what distinguishes this particular borgo from other hilltop towns is that it’s currently available for sale. The owner has listed the entire historic village, which comprises about 50 buildings, for $44 million. The town, which first appeared in historic records in 1198, contains a church, a grain store, a foundry, a carpenter’s workshop and a handful of other buildings that are laid out along three parallel streets of the original medieval plan. The sale further includes surrounding farmland: 200 acres of woodland, two lakes, 23 acres of fruit trees (plums and apples), 55 acres of vineyards growing Chianti Colli Senesi DOCG grapes, 26 acres of olive groves, 270 acres of irrigated arable land, as well as several stone houses and animal byres.

Around 200 people used to live and work at Poggio Santa Cecilia farming the surrounding land. As was common practice at the time, workers gave the landowner half of their produce in exchange for the use of a house and some land and animals. However, following the Second World War many of the estate’s inhabitants left in search of a new life, many of them working in the travertine quarries of Rapolano, and so the houses and farms were gradually abandoned. The village’s deserted state is in part what allowed the architectural and historical treasures to be well preserved. The current owners, a family from northern Italy, have been operating the estate’s organic farm, but left the village portion largely untouched, save for weatherproofing and installing a security system to keep vandals out.

“The owner is in his 80s”, explains Francesco Carlucci, founder and CEO at Essentis Group who represents the listing. “It’s a big commitment. As you can imagine, it’s not the type of project you might want to develop once you are in your eighties. It’s a project of a lifetime”.

An ambitious individual seeking a passion project, an art aficionado, say, or a history buff is the type of buyer Mr. Carlucci has in mind for the property. Passion is important given the amount of renovation and restoration required. At this quiet hilltop village, time has stood still, be it for the slow forces of nature, the roots and vines that have begun reclaiming the stone houses. Carlucci, who specializes in historic restorations, estimates a full restoration would require five years and an additional EUR 150 million ($167.6 million). “Everything needs to be restored”, he says. “It’s basically a EUR 200 million project. This is something you should do if you are passionate about Tuscany, about art, architecture and vineyards, if you have the money and you have the dream”. Tuscany has long been a dream destination for buyers around the world. Travelers fall in love with the region’s natural beauty and cultural riches, which include, to the west, the famed Amalfi Coast with its dramatic cliffs and sparkling beaches, and to the east the Chianti region, Italy’s foremost wine producer, with its rolling green vines and famous Sangiovese grapes. Along the winding country roads there are fields of sunflowers, vineyards, silver olive trees and the smells of lavender, mint and rosemary, aromas that are laced through the region’s mouthwatering cuisine.

Florence, the region’s largest city and birthplace of the Renaissance is home to a dizzying array of notable art and architecture, including Michelangelo’s ‘David’ and the Duomo basilica which features the largest brick dome ever constructed. Sienna, 70 kilometers to the south, is home to immaculately preserved medieval buildings and the fan-shaped Piazza del Campo. Even the smallest of villages are layered with history. Medieval churches are built on the foundations of Roman baths; Renaissance frescoes now embellish their earlier austerity. The area’s sought-after status, however, means that top quality villas rarely come onto the market. When they do, they often discreetly change hands. “The type of people that own them try to pass them on to the next generation”, says Carlucci. “Owning a property in Tuscany is an asset; people dream of it their whole lives”, Even more extraordinary, he says, is procuring an entire Tuscan town. “This is big. This is a piece of history”.

Over the last decade, several Tuscan hamlets have been restored and redeveloped as luxury hotels. The most notable, Il Borro, was developed by the Ferregamo family. Ferruccio Ferragamo first discovered a Tuscan village while on a hunting trip in 1985. At the time, the hillside village, once owned by the Savoy dynasty, was in a severe state of disrepair and, in spite of being surrounded by fertile land, its inhabitants were struggling to make a living. He bought the hamlet, as well as a neighboring villa that had been half-destroyed during WWII and spent much of the past decade overseeing the restoration. Ferragamo transformed the hilltop village, which dates back to 1039, into a luxury resort where the rooms and villas retain many original features, but include modern comforts like air-conditioning, mini-kitchens with espresso-makers, mosaic-walled bathrooms and Salvatore Ferragamo toiletries. Borgo San Felice, located about 50 kilometers east of Il Borro, has also been transformed from medieval town to a luxury hideaway. The village, which dates back to the 8th century, retains its narrow streets and picturesque squares, its Romanesque chapel and shrines, as well as 140 hectares of surrounding vineyards. The hotel’s rooms and suites are scattered throughout the main villas and other buildings.

Developing a luxury resort with villas is one option available to the future owner of Poggio Santa Cecilia, but Mr. Carlucci believes the property could also sell to a single buyer. “In the world we live in today I wouldn’t be surprised if some visionary family decide to actually own the town and do what they want with it”, he says. The one point on which Mr. Carlucci remains firm is that the estate be sold in its entirety. “Splitting it up would be like so many other properties on the market. And the second you split it you lose the entire ability to control it”, he says. Careful, considered restorations have become an Essentis Group trademark, which is why the current owner has entrusted the company with the restoration. The company has its own stonemason academy and restores everything from original arches, to facades and floors. Its craftsmen also have the capability of building historic features anew using traditional materials and centuries-old techniques.

In the southern Italian region of Puglia, the group recently built a range of luxury contemporary masseries (courtyard farmhouses). The buildings have traditional features such as a barrel-shaped vaulted stone ceiling made of hand-cut limestone and sandstone, but they also have modern touches like swimming pools, pizza ovens, wine cellars and indoor spas. Such an approach, albeit adapted to a Tuscan setting and style, would guide Essentis Group’s restoration of Poggio Santa Cecilia. Most of the village houses have traditional Tuscan wooden doors, terracotta tiled roofs and floors and wood beamed ceilings. There are about 20 farmhouses in total, each one resembling a quintessential Tuscan scene complete with cypress trees and open fields. And although they were originally peasant homes, the properties are stately and large ranging from around 3,800 sq. ft. to more than 10,000 sq. ft. of potential living space. The centrepiece of the village is the summer residence of its former aristocratic owners, the counts of Buoninsegni. The majestic villa, completed about 100 years ago on the site of the original castle still evokes the grace and ease of nobility with its grand salons, conservatory and formal English gardens. So far Poggio Santa Cecila has piqued the interest of numerous potential investors. Although Mr. Carlucci cannot comment on who has expressed interest, the real estate professionals in the region say international buyers are currently a strong force. “In Umbria and Tuscany, there is a return of foreign customers, American, Chinese and Southeast Asia”, says Fulvio Biagioli from Italy Sotheby’s International Realty. In particular, he says he receives requests from buyers from Singapore, Hong Kong and Malaysia.

Current real estate prices in Italy are around 30% below their pre-2009 peak, but this trend is starting to change. In 2015 inquiries on Italian property increased 57% year-on-year according to data from Knight Frank, with Liguria, Umbria, Sardinia and Tuscany all seeing an increase in sales volume. Overall sales were up 7%. Mr. Biaioli’s listings include Casigliano, a 16th century manor in Umbria, 1.5 hours from Rome, which includes 13 country houses with views of the Umbrian hills. Eight of the buildings have been renovated, while the remaining four still require restoration. The property, which could make an ideal boutique hotel, is listed for $11.1 million.

Though investors may find other opportunities for development, Francesco Carlucci remains adamant that nothing quite compares to a medieval village in a premium Tuscan location. “There are many beautiful farmhouses, great residences to rent or own, but they are not comparable to a whole town located just 20 kilometers from Siena. This is something that simply doesn’t happen every day”.