The German capital is creating the perfect drawing board for contemporary designs amidst a medieval backdrop. 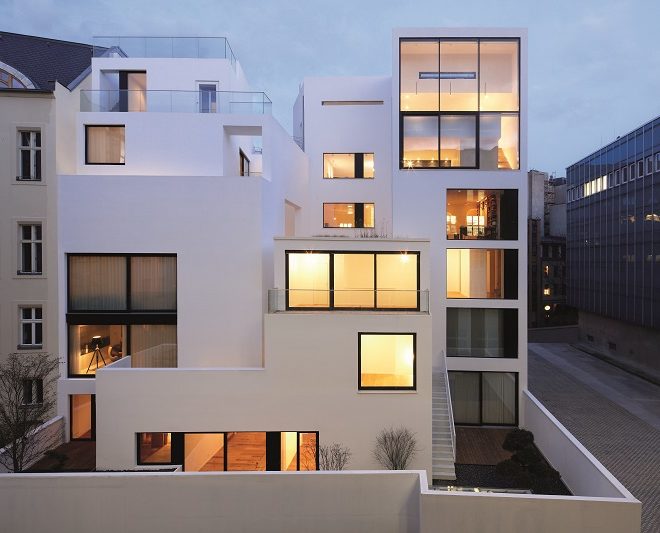 Although a ‘new’ Berlin has clearly emerged since the fall of the Berlin Wall, the city continues to evolve, particularly the central ‘Mitte’ district, formerly part of East Germany, where layered fragments of history are joined by a wave of new development. The scars and voids in the city’s fabric provide a compelling framework for architects who are tasked with addressing the city’s troubled history, while also creating structures anew. This was the tension that the Berlin-based studio Atelier Zafari confronted when designing Cölln-Palais, a low-rise building on Waisenstrasse, in Berlin Mitte. Located opposite Berlin’s old city wall, the project’s irregularly shaped 5,597 sq. ft. plot presented several structural constraints: a narrow street frontage, a considerably wider rear section and a surrounding six-story firewall. The location also posed various conceptual challenges. “How can the density, the individuality and naturally grown fragmentation of the medieval structure with courtyards and alleys, as they once were, be transformed into a different, contemporary language?” says principal architect Sohrab Zafari. “At this place, where time left so many scars, shouldn’t there be a house that’s been developed not only to fill voids, but also to leave voids?”

Zafari’s solution was a spatial arrangement where generous apartments and town houses fit together like an intricate, volumetric puzzle, and indoor and outdoor spaces are woven into the building’s layered folds. “The idea is not only to fill voids, but to leave voids, sometimes inspired by old ruins,” he says. The project features just a handful of residential units including an elegant penthouse recently listed for $3.4 million. Spanning two levels, the 1,939 sq. ft. penthouse unit embodies this balance of solids and voids with its light-filled rooms and outdoor living spaces. For the interiors, Zafari selected a sophisticated blend of materials including Italian black stone flooring and exposed concrete and white stucco walls. The surfaces echo the structured wall surfaces and geometric lines visible from the outside and create a pared back look that is furthered by the use of cladded doors that merge almost seamlessly with the walls.

The loft-like residence is arranged around a bright living area that opens into a wide terrace on one side, and the adjoining kitchen on the other. Custom made by Reuter & Schmidt, the kitchen features appliances from Miele and Gaggenau, Italian Bianco Perlino marble countertops, a freestanding stone cooking island and 200-year-old Dinesen oak floor panels. Fitted cupboards that conceal the fridge-freezer and additional storage spaces. From the kitchen, two staircases lead to the other living areas, one to the roof terrace, which includes a water feature and floating concrete islands perfect for lounging and taking in views of the cityscape. The other staircase leads to the lower level, which houses the master bedroom. The room features a clean, simple design and an adjoining master bath where sculptural sinks are made from the same Bianco Perline marble used in the kitchen. There is also a shower that converts into a steam sauna and slits in the walls allow for a fascinating play of light and shadow.

“There are a very few properties in Berlin like this one,” says Peter Rabitz, Director of Premium Real Estate at Zabel Property Group, a company that specializes in the sale of luxury homes in Berlin Mitte. “It is private, but also has a roof deck space, great for entertaining. The open plan layout works great for a modern and metropolitan owner who likes to collect art.” Berlin’s Mitte district has become increasingly coveted in recent years, particularly among foreign buyers. In 2014, international buyers accounted for around 70% of property sales in Berlin Mitte. Now Rabitz says this number is closer to 80%. As the city’s start-ups gain traction, local IT professionals are also becoming a driving force in the city’s luxury housing market. “We see an increasing number of young IT professionals who might be interested in such a property,” he says.

Foreign buyers are drawn by the laid back lifestyle the city affords, and relatively low prices compared with other European capitals like London and Paris. Even within Germany, the cost of living in Berlin remains lower than Munich, Hamburg and Frankfurt. But prices are rising – nearly 80 % since 2010 in certain areas. In 2015 prices rose around 10%, according to a report from Jones Lang LaSalle. Mitte comes in slightly higher at 12% and Zabel Property Group has reported prices as high as $600/sq. ft.

Berlin’s lack of housing supply is a major contributing factor. Peter Rabitz says an estimated 17,000 building permits were delivered in 2015, but 20,000 to 24,000 units would be required to absorb the current demand. Only around 7,500 units were completed in Berlin in 2015.

Central locations remain in highest demand, particularly for those seeking contemporary residences with cutting edge design and easy access to the city’s cultural offerings. The Cölln-Palais is located within easy reach of Alexanderplatz, known for its countless shops and restaurants, as well as the Nikolaiviertel district and trendy Hackescher Markt.

New buildings that offer a full suite of amenities such as those common in Singapore and London are not yet the standard in Berlin’s high-end market, but select developers in Mitte are building with today’s luxury lifestyle in mind. In addition to under floor heating and air conditioning throughout, the Cölln-Palais features an underground parking area with rounded walls, extra-wide parking space and epoxy resin flooring. From here, penthouse residents can take a lift directly to their apartment.