Portugal’s top coastal holiday destination is making a comeback where the sunny climate and beautiful beaches are attracting foreign investors once again. 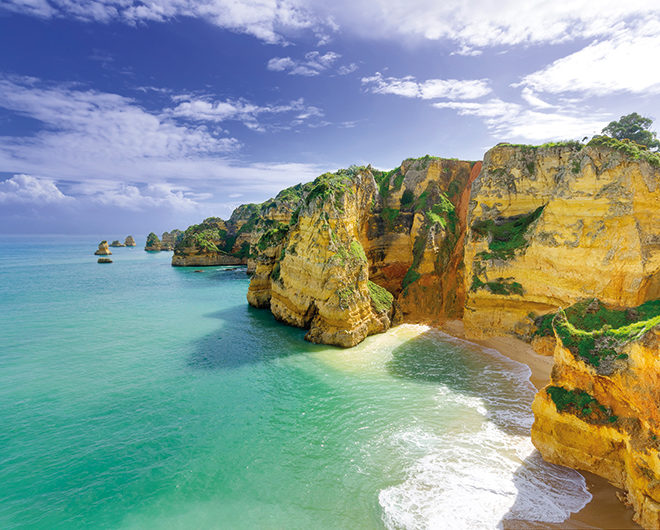 Although sometimes overshadowed by its glitzier Iberian neighbour, Portugal’s Algarve coast has long attracted retirees and holidaymakers seeking Mediterranean beaches, award-winning golf courses and year-round sunshine. The most developed stretch of coastline is between Lagos and Faro, where cliff-side resorts overlook sandy coves. To the east, a string of sandbar islands and lagoons form a protected natural park and to the west, a wilder, more remote Algarve meets the restless Atlantic Ocean.

Like some other holiday-home destinations in Europe the Algarve was hard hit by the 2008 financial crisis. Investment was scaled back, home values slipped and there was little to no development for almost seven years. “Prices were eroded quite badly during the recession. We saw about a 30% drop in prices from 2007-2010”, says Zoie Hawker, Managing Partner at Fine & Country, property agency in Carvoeiro, central Algarve. “But the market has been slowly recovering since 2013”. In its June 2015 report, the OECD predicted that the Portuguese recovery would strengthen on the back of strong external demand, a weaker Euro and lower oil prices, and that business investment would pick up further in 2016. Indeed, Portugal’s property prices have risen amid a recovering economy. Prices rose by 3.66% year-on-year in January 2016 to an average of EUR 1,047 (USD 1,168) per square metre. In Algarve, the country’s most expensive housing market, average prices rose to EUR 1,287 (USD 1,436) per square metre.

“The Algarve is promising”, says Kate Everett-Allen, Head of International Residential Research at Knight Frank. “Prices dropped 40-50% below their pre-crisis peak and until now buyers have been particularly cautious. But after a total halt to activity the market is now coming back”.

The Algarve is pricier than the rest of Portugal, but prices vary depending on location. In Carvoeiro, halfway along the Algarve coast, luxury properties sell for around EUR 3,000 (USD 3,377) per square meter. In Quinta do Lago, the region’s premier resort area, prices range up to EUR 6,000 (USD 6,750) per square metre and higher.

As part of the ‘Golden Triangle’ – a triangle of resorts which comprise the most affluent tourist area of the Algarve – Quinta do Lago has four championship golf courses and a collection of luxury villas that proved remarkably resilient during the crisis. “We were lucky to not see much of a change in demand or a drop in prices”, says Jamie Robinson, Sales Director at Quinta do Lago. “It is a world-renowned resort which has been around for over 40 years with continued investment throughout its lifetime, which helped to maintain its secure reputation for property purchase”. The resort’s older properties, which sell for between USD 1.5 million to USD 7 million are modelled on traditional ‘quinta’ Portuguese farmhouses, however, there is an ever increasing trend for luxury homes with contemporary design.

E3 Property is currently developing The Keys, a new project in Quinta do Lago that includes 48 villas and 24 apartments designed in contemporary architectural style with indoor and outdoor living spaces, rooftop pools and underground garages. The properties range in size from 398 to 1,010 square metres and are priced between EUR 4,300 (USD 4,840) to EUR 6,700 (USD 7,540) per square metre. Zoie Hawker says typically her clients are looking to spend EUR 700,000 (USD 788,000) to EUR 1 million (USD 1.12 million) on a stand-alone villa with a garden. There is also some demand for condominiums among buyers who wish to rent out their properties, an attractive option given the current boom in tourism. “We’ve had one of our best years ever but for all of the wrong reasons”, Hawker says. “People are coming to Portugal and Spain because they don’t feel safe in Greece, Turkey and other destinations throughout the Mediterranean”.

Buyers from the UK, Holland, Germany, Sweden and France make up the majority of property sales, although there was a considerable slowdown in sales to British buyers when the Brexit referendum was announced. However, Fine & Country is starting to see the flipside of that. “A lot of new British buyers have surfaced who want to get out of the UK because of Brexit. We’ve had more sales to British buyers since June 23rd than the whole rest of the year”, Hawker says.

In addition to the favourable climate, good public and private healthcare and reputable international schools, draw buyers to the Algarve. The Golden Visa scheme – 5 year residency permit with EUR 500,000 (USD 560,000) investment – has also been an incentive for some overseas investors, but Asian buyers remain scarce in the Algarve, preferring to invest in Lisbon. However, this could change. “We didn’t have French buyers here five years ago and now they have become the single largest market”, says Hawker. “We are feeling quite positive”.