For three days and two nights, LUXUO was privileged to have been invited to experience the legendary service standards of the Waldorf Astoria Beijing Waldorf Astoria is one of the world’s most prestigious and best known hotels. Opened in 1893, it was originally two historic inns – the Waldorf Hotel and the Astoria Hotel. Designed by Henry J. Hardenbergh, both the Waldorf and the Astoria were demolished in 1929 to make way for the Empire State Building but even at its present 301 Park Avenue address, the Waldorf Astoria’s reputation for lavish service and opulent luxury remained. The Anbang Insurance Group of China eventually acquired the icon of glamour and luxury for US$1.95 billion in October 2014, making the Waldorf Astoria New York one of the most expensive hotels ever sold, setting in motion plans for Waldorf Astoria Beijing.

For three days and two nights, LUXUO was privileged to have been invited to experience the legendary service standards of the Waldorf Astoria. Located in the heart of downtown Beijing, China, next to Wang Fu Jing, the famous high-end walking shopping district, the Waldorf Astoria Beijing, a stone’s throw of the Forbidden City (and viewable from some of the corner rooms of the hotel – especially the vantage point of our King Premier Suite on the 9th floor) is among the Chinese city’s most exclusive of high end luxury hotels. Ask for a West facing room and you can make out the the white dagoba atop Beihai Park and the iconic rooftops of the literal palatial home of 26 Emperors. 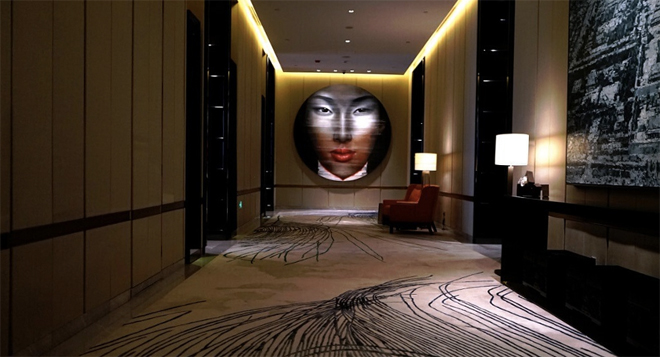 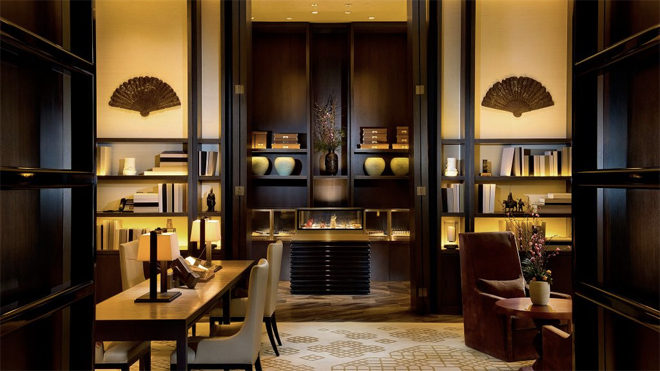 Inside, the Waldorf Astoria exudes elegance: walls of Suzhou silk 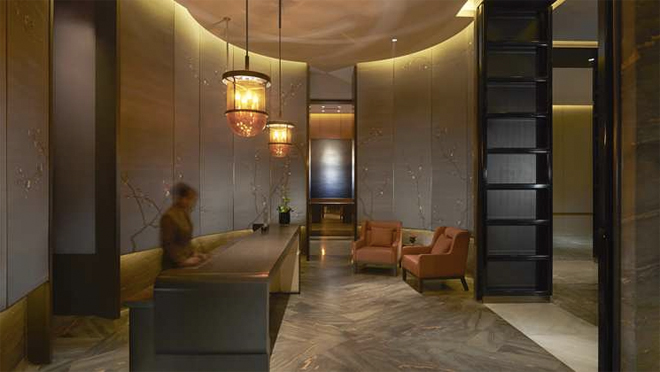 10 minutes walking distance to Tiananmen Square and the Forbidden City, rich Chinese tradition and modern affluence are offered in a compelling cocktail at the Waldorf Astoria Beijing. There’s an oriental charm which isn’t readily apparent thanks to the generous use of bronze ( a royal material which expresses the luxury, dignity, and legend of the Waldorf brand, and reflects the character of the site’s location), which in the daylight hours harbours a gilt tinged glow; Other high-end, traditional materials were used to the same effect; grey granite was used as a background material on the walls, which recalls the historic charcoal bricks of Beijing’s traditional residential streets; it’s contemporary luxury without the feel of excessive chinoisserie which comes from “trying to hard” – . The 176 room Waldorf Astoria Beijing is the premier hotel not just for its opulence and service, but also for its unparalleled connectivity – 10 minutes drive to the CBD in a city renowned for its traffic jams while the nearby subway line (Line 5 to be precise) will offer quick transportation to tourist destinations like the Lama Temple and Confucius Temple.

The unique blend of modern elegance and rich Chinese heritage begins from the stylish lobby. Checking in is quick and painless, the concierge is already aware of your estimated arrival and anticipating your needs. We arrived with our baggage whisked from our limousine and was already present in our rooms before we had completed our check in process. Our Room at the Waldorf Astoria Beijing: King Premier Suite

Access to the indulgent King Premier Suite at the Waldorf Astoria Beijing is made through a long corridor with high ceilings – it’s a grand residential living space with the comforts of a high end apartment, the walls are mirrored while generous wardrobes hold your overcoats, blazers and other accoutrements effortlessly.

The carefully detailed bay window with large floor to ceiling glazing provides the best city view for each guest room, and creates the unique window room area with featured window screen for guest to enjoy the special living experience in Beijing. Impeccably stylish, the eggshell walls, accented with panels of purple-blue silk complete the Art Deco touches which punctuate the room with a homely yet designer feel. The room is completely automated and controlled either by buttons on the wall (like curtain controls for open or closing manually – the curtains are motion activated and automatically draw when you enter the room) and you can control the majority of the room tech via Samsung tablet handset. The beautifully appointed bedroom of the Waldorf Astoria Beijing King Premier Suite offers a king-sized bed and a lavish bath with premium amenities – it’s not hyperbole when we say that you, your companion can comfortable lie prone in the large marble bath complete with headrest for supreme comfort. These luxe touches thoroughly sell the Waldorf Astoria experience even before you reach for the Ferragamo bathroom amenities. Oh and hey, we noticed on the three cold winter mornings, that the bathroom floors were heated. The Japanese-style toilets are fully automated as well, the toilet seat lifts automatically or manually controlled from a wall panel which also activates the flush and the bidet.

Work productivity is not an issue either, a fully equipped desk with stationery and complimentary WiFi connectivity serve to reinforce the mood for efficient work deliverables thanks to the inward facing desk with the sun at your back. That said, the WiFi is inexcusably slow for such a 6 star hotel, that said, a foreigner in China would benefit more from using his roaming 4G mobile data connection than using loca internet access if you wish to access Facebook, Google and Gmail – applications all banned in the Chinese capital.

Spa, Fitness room and indoor pool at the Waldorf Astoria in Beijing

If you’re not up for venturing out, there’s plenty to experience within this unique hotel, including the Waldorf Astoria Spa is a place of refuge and relaxation. Indulgent treatments married with exceptional care create a place where guests release stress and experience tranquility. The Waldorf Astoria Spa, a luxurious wellness escape where discerning guests undertake unique and authentic spa journeys, offers a full menu of spa treatments, salon services and fitness activities. With seven treatment suites and a spa retail boutique where skilled therapists will deliver signature calming, results-oriented therapies with products featuring exotic ingredients.

The fitness room is equipped with the latest cardiovascular and weight training machines, however, we must stress, there isn’t enough weight training equipment to reliably train more than two men or women at a time. That said, the standing slatted weight machines offer a variety of hand grips for a complete chin-up oriented work-out. Furthermore, if body weight and calisthenic activities are more your speed, the mirrored passage just before the gym offers yoga mats, yoga balls and rollers for a complete full body work-out. If sweaty exercise is not your thing, warm embrace of Waldorf Astoria Beijing’s heated swimming pool with reclining lounge chairs offers the ultimate swim in any season.

Zijin Mansion is the perfect occasion to blend traditional eastern cuisine with western wines. A living testimony to poetic luxury, guests walk out of the elevator on the 3rd floor and view the impressive walk-through wine cellar with over 400 different wines from New Zealand, Australia, South Africa, Argentina, Chile, and France. The Waldorf Astoria Beijing’s legendary, rare and classic wine collection includes not only first-growth Bordeaux like Grand Cru or Premier Cru but also many undiscovered labels which one can pair with the local cuisine. Served on renowned French-designed porcelain, diners at Zijin Mansion can partake in delicacies amidst the Waldorf Astoria Beijing’s vast collection of high quality and boutique wines.The porcelain is composed of Kaolin clay, believed to be first discovered and utilized in Jiangxi Province. A French resident picked up the craft of porcelain-making in the early 18th century in Jiangxi and brought it back to France. From there, the art of porcelain was developed around the central French area of Limoges, home to the Legle family factory and where kaolin supply is abundant. This “chinaware” illustrates the bridge between China and the West as does Waldorf Astoria Beijing, where Eastern elegance and Western luxury are blended beautifully. If it strikes your fancy, Chinese Food & Wine Pairing sessions are available once a month (not while we were there) where Cantonese cuisine with strong Beijing influences are paired with spectacular wines. Breakfast is had at the Waldorf Astoria Beijing’s Brasserie 1893 where it’s all about candid (limited if you don’t speak the language) chef-and-guest interaction, gastronomical indulgence and visual bliss. The main dining room with show kitchen equipped with two stunning hand-crafted Molteni stoves, brings the chefs into close contact with diners. Conversations with long term guests at the hotel reveal that some of the best steak dinners and oysters can be had here; including the legendary Waldorf Salad which takes its name from its invention at Waldorf Astoria New York.

LUXUO had breakfasts of Eggs Benedict and tested the chefs with a variety of requests including egg white omelettes and scrambled eggs with all manner of sides. Your experience may vary, dependent on how well the server translates your order in mandarin, that said, the dishes are well above competent. Guests expecting your usual continental breakfast fare will be sorely disappointed – most of the dishes offered consist of oriental cuisine like porridge and dim sum with the sole exception of baked beans, bacon and a selection of veal, pork and chicken sausages.

If you’re looking for an unforgettable stay in lavish comfort, you simply cannot do better than the Waldorf Astoria Beijing. That said, the area is shared with the Peninsula Hotel and the Regent; and other than its proximity to shopping malls and the Forbidden City, the Waldorf Astoria in Beijing isn’t situated in the most vibrant part of town. At the higher floors, traffic noise is not an issue, however, those on the lower floors might find rush hour and the cacophony of car horns (apparently, use of the horn is standard to Chinese drivers rather than only used in emergency situations) might be a little disconcerting. LUXUO rates this stay 8/10.