Simpson Marine’s Tony Chen talks about the growth of sailing in Taiwan, where there’s a natural affinity with the water, but still much work to be done.

I was born and raised in Penghu, a group of islands off the west coast of Taiwan, and started dinghy sailing in 1999. Later, I became interested in keel boats and bought my own boat before starting to cooperate with Simpson Marine in 2006. Four years later, Simpson Marine set up an office in Penghu as it entered the Taiwan market. 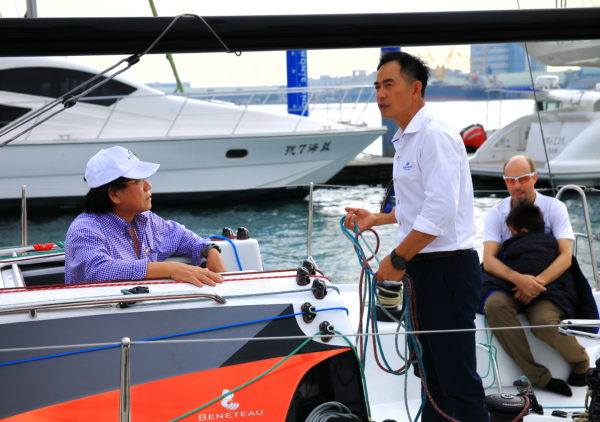 Taiwan is a beautiful island and has a lot of people who love water sports, so early business confirmed there’s great potential in this market. However, due to historical and political reasons, we were starting from a low base as leisure boating had barely developed. Even today, we  – I’m speaking as a sailor and boat owner – still need to register before we sail out.

As Beneteau and Simpson Marine sought to promote a sailing culture, we tried to think of ways to interest Taiwanese in boating and develop a local sailing community. Following the lead taken by Beneteau and Simpson Marine in their support of the China Cup International Regatta for over a decade, we’ve worked with the Penghu government to host the Penghu Regatta since 2013.

In the first year, there were only 11 teams. Last year, we had 30, with teams from China, Hong Kong and other countries. Other regattas in Taiwan have also grown steadily. Simpson Marine also joined the Taiwan to Okinawa race, which has also proved popular around the region, attracting overseas sailors.

Sailing has grown because it appeals to those seeking a fun, healthy and social outdoor activity, while regattas and events are relatively easy to promote and market. Taiwanese love the water, so their interest in sailing is actually quite natural. Taiwan is home to the first Figaro 3 in Asia

But owning a yacht is still not easy. As in China, the Taiwan government levies a high luxury tax on yachts. About three to four years ago, the government welcomed foreign boats coming to Taiwan and supporting the economy, so many owners registered their boats overseas. They didn’t need to pay extra tax, but could still enjoy the yachting lifestyle in Taiwan.

However, this policy didn’t remain in place for long and now it’s difficult to bring a foreign- flagged boat to Taiwan without formal importing procedures. The tightened policy has affected the industry, which has since been a little quiet. Last year, however, the market woke up a bit  as owners started to get used to the policy and bought yachts registered in Taiwan.

There’s a notable difference between the sailing community and motor yacht owners. Many sailboat owners or enthusiasts are like me, former dinghy sailors or windsurfers, while most motor yacht owners are businessmen who had interests in mainland China and were influenced by yacht owners there. They often purchased a yacht because they believed it was a status symbol, but are quite low profile as being a luxury yacht owner is against our tradition for modesty.

Although there are many sailing clubs in Taiwan, there are not that many supporting facilities, which does hinder development.  We have marinas in Taipei, Kaohsiung and Tainan that were built a few years ago when the yacht industry began to grow. However, it became apparent that managing a marina wasn’t easy and that experienced professionals were needed to maintain facilities to meet owners’ expectations. Sailors enjoying the Figaro 3, a foiling monohull designed for racing

In 2014, Taiwan began to host boat shows, which played a positive role in promoting the yachting lifestyle, while increasing numbers of Taiwanese have started to charter boats for fun. Tourists come to the Penghu Islands and find incredible scenery and special cultural attractions.

As a sailor who grew up in Penghu, I know Taiwan is a paradise for sailing, with a warm climate and good breeze. There aren’t many fishing nets along the coast, and the wind and waves only get challenging from October to December.

We’re working hard to attract more people in Taiwan to sailing. We continue to work with and push the government, and promote the lifestyle. We also hope that one day you will come here and find out Taiwan is truly a ‘treasure island’.

Tony Chen is an accomplished sailor, windsurfer and photographer, a Lagoon 380 owner and Simpson Marine’s Taiwan Country Sales Manager. He’s a strong supporter of local windsurfing and sailing, and has competed in the Taiwan Strait Race, Penghu Regatta, China Cup, Straits Cup and Churahana Cup. Chen is the Keelboat Chief Executive of Penghu County Sailing Association and Supervisor of the Chinese Taipei Sailing Association, as well as a Member of its Sailing and Officer Committees.

Note: This article first appeared as a COLUMN in Yacht Style Issue 46.