The new Swan 48 by renowned designer Germán Frers is brilliant, as Yacht Style contributor Guy Nowell discovered after flying to Finland to see for himself.

“Today is looking good,” says Vanni Galgani, Product Line Leader at Nautor’s Swan. “This could be the Finnish summer. I’ll tell you if it is, then you can take your jacket off. It’ll last about half an hour.” 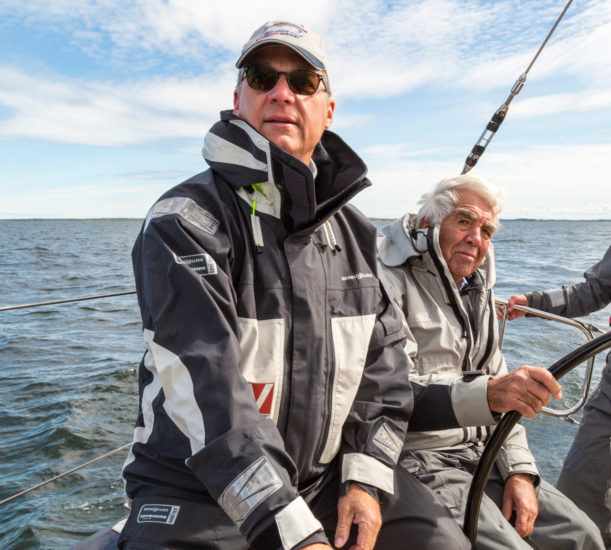 There’s a sort of wry truth behind the flippant comments. We are just about to step aboard the oh-so-new Swan 48 – hull number one, splashed just the day before I tested it – and the weather is just perfect for sailing, with blue skies, sunshine and 14 knots of breeze. But it’s not always like this.

The Nautor’s Swan Boat Technology Centre is in Jakobstad (Pietarsaari in Finnish) on the Gulf of Bothnia, just 330km south of the Arctic Circle.

In winter, the temperature drops below -10 ̊C, the sea freezes over and the countryside turns into a very chilly wonderland. Like Swiss watchmakers holed up in the mountains, the Swan craftsmen are indoors, building some of the very best production sailing yachts in the world. 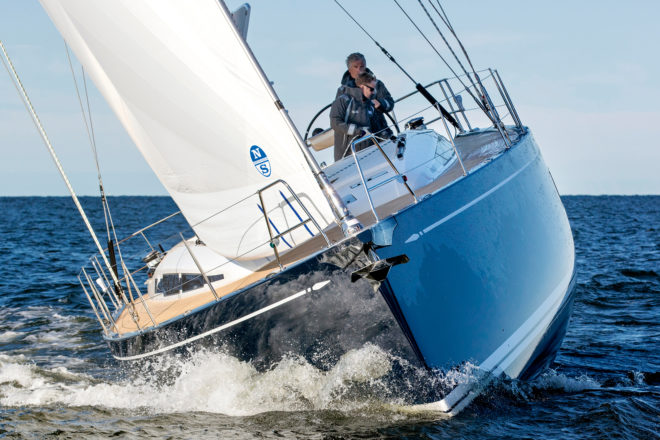 When the spring comes, it’s the birthing season. When the sea ice melts, the boats are launched. The sailing season here is brutally short – just six weeks or so – and all the boats that have been built over the winter have to be launched, commissioned and handed over to their new owners.

The Swan 48 is the newest addition to the Nautor’s Swan family. Except for the ClubSwan 36, which is a flat-out racing boat, the 48 is the smallest Swan to go into production for some time.

Giovanni Pomati, a recent addition to the Nautor’s Swan family himself, having been appointed CEO in September 2018, was delighted to report that 16 boats were sold before the first one was launched – and that one more was signed while we were out on the water! That’s cheerful news for Nautor’s Swan, which is reporting a full order book all the way through the size range. 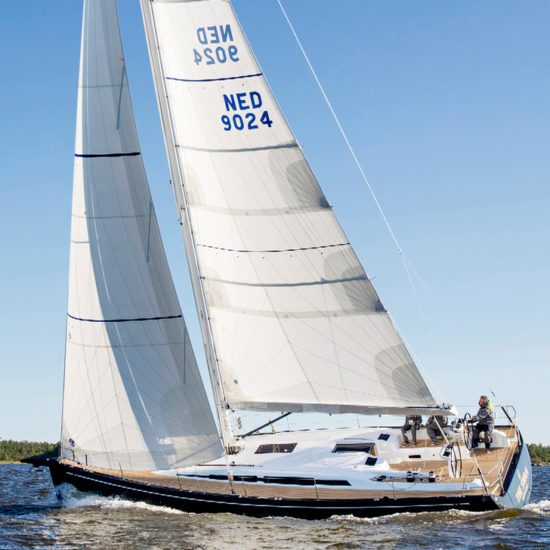 Light on her feet, easy to manage, and with all the feature comforts you’d expect from the Frers drawing board, the Swan 48 is a compilation of good design

The new Swan is a Mk III version, the original 48 having been designed by Sparkman & Stephens in 1971 and the next one in 1995 by Germán Frers, who has also designed the 2019 version.

“You design to a brief,” says Frers, now 78. “Yes, it would be nice to start with just a line and a handful of imagination, but it is necessary to be more rational than that.”

He acknowledges that today’s materials allow a designer ever-greater freedom. “We can now build a great deal lighter for the same strength than ever before. Partly it is materials, partly it is engineering know-how. There is as much interior volume in this new 48 as there would have been in a 65-footer from 25 years ago.”

He looks rather pleased with himself, as if he had turned the Tardis into reality. So, what is it that gives this new Swan its appeal, even sight unseen? Pomati believes that it’s simply a matter of hitting a ‘sweet spot’ in the market. 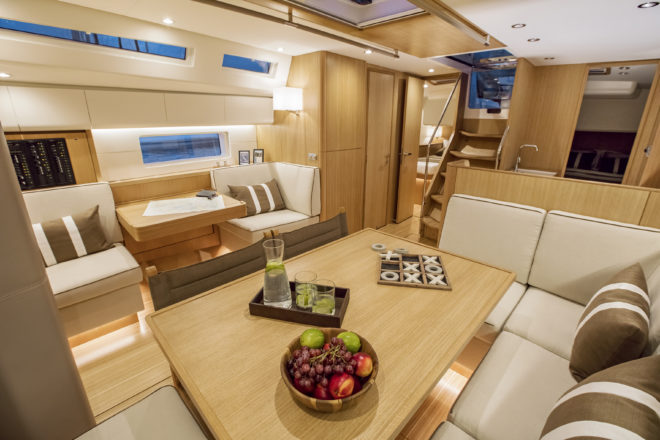 With a place for everything, and everything in its place, the saloon works equally well when cruising or racing

“A 48-footer is a boat that can be easily handled by two people when cruising. It offers three seriously roomy cabins and two heads. It is designed as a quick boat to appeal to the ‘racer’ component of the racer/cruiser market,” says Pomati, who had previously worked in the automotive sector, spending 29 years with Pirelli Group.

“It speaks immediately to existing Swan owners looking for a replacement for an older Swan 44, 46, 461 or 48. It is attractive  to younger customers wanting to move up the size and the quality spectrum, and is ‘right there’ for older Swan customers looking to downsize to a boat with less canvas, less load in the lines, and less hard work.”

At the time of testing, the boat was too new to have an IRC certificate, but Frers promises that it will be “very competitive”. Twin wheels and twin rudders means that optimum performance comes at 22-24 degrees of heel, when the ‘active’ rudder is vertical.

The Argentina-born designer also points out that “CFD analysis indicates that a smaller rudder, near vertical, and with the windward (trailing) rudder touching the water, produces significantly less drag than a single, bigger rudder at an angle. It’s just more efficient.” The mast is positioned well aft on the deck, right over the keel, allowing for a big ‘J’ and an expansive foredeck. Forward of the mast, you can fly an a-sail off the end of the fixed bowsprit, or a Code 0, a jib or a staysail. The bowsprit neatly conceals a structural bracket that supports the anchor and retrieval system.

From the foot of the mast, all lines disappear into conduits leading aft to the winches, all immediately accessible from the helm. Rope tails vanish into immensely deep and capacious lockers – you’ll never have a line rolling underfoot on this boat.

All the line conduits, as well as the trench for the foldaway  bimini, have lifting covers – no inaccessible tangles here. There’s  no mainsheet traveller, defining this boat perhaps as a cruiser/racer rather than a racer/cruiser, but the sheeting point is lifted up on a pedestal that doubles as a leg of the cockpit table (when in use), which makes sheeting close to the centre line a good deal easier.

Drop down the elegant white-oak companionway into the saloon, and everything is in its proper place. There’s light – lots of light – coming in at three levels: hull windows, coachroof windows and deck hatches. There are no special surprises in the layout, no revolutionary rearrangements, but the boat looks just and absolutely right. And refreshingly, the showers are a proper size for burly sailors, too. The beautiful forward cabin has an en-suite

There’s no sense in questioning the finish on a Swan interior, so we won’t. We have been in the factory and seen the layup of myriad interior components, and fully appreciate that these boats are constructed with an almost obsessive attention to detail and quality.

Furthermore, the Swan 48 hull is built as a one piece from glass, vinyl ester, Corecell foam core and a gelcoat finish, and then the bottom frame structure is installed in one piece. This is not only the strength and stiffening component of the boat but also the conduit for all the ‘services’ in the boat – principally water and electrical.

And then the interior is built in. Open any locker and you will find that the back panel is fabric, attached with Velcro, and all those wires hidden behind elegant joinery are in fact very easily accessible. Good design exemplified.

FRESH ON THE WATER

Out on the water, it’s a crisp summer’s day in Finland (keep your jacket on) and the boat heels to the breeze, leaning comfortably on her elbow – I could swear that it was between 22 and 24 degrees. Frers himself is on board and after a couple of tacks he pronounces himself satisfied. “Of course, we are not trying to plane with a boat like this, so it’s important that both ends stay in the water, to maximise the waterline length. The fore-and-aft balance feels right, so I am happy there.”

For sure, there was some fine-tuning to be done, but sailing on flat water in nine knots of breeze and with sheets just eased, we were making 8.6 knots of boat speed.

The boat moves easily – there is no sensation of ‘loading up’, and the twin rudder set-up means that the steering was light and responsive. In short, this boat is gentle on the helm, and any lucky owner is going to be able to eat up the cruising miles without any stress on the driver or the crew. A well-mannered boat, beautifully turned out, ready to please, and ready for adventures!

It’s €730,000 (US$820,000) for the basic model and no Swan is ever going to be described as cheap, but there are plenty of other boats out there that fit that category. For a few extra Euros, you can have a carbon mast and a 70cm crane at the top, and a v-boom that magically swallows up the main as it comes down. Owner of hull one ticked those boxes and won’t be disappointed.

The new Swan 48 is more than fit to assume the mantle of her famous predecessors, and is destined to be a boat that punches well above her weight in the competitive stakes. I’m putting my name down for hull 18. Now, where did I put my cheque book?