Sanlorenzo has announced impressive pre-sales of its new aluminium-built 44Alloy, which is scheduled to premiere in September.

Sanlorenzo has announced five pre-sales of its new 44Alloy, which is scheduled to make its official debut at the Cannes Yachting Festival in September. The Italian builder said all five units were under construction. The yacht has accommodation for 10 guests and nine crew. 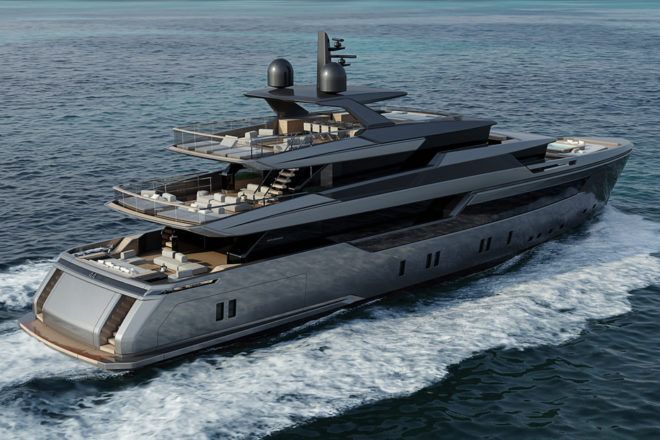 Bernardo Zuccon designed the exterior of the Sanlorenzo 44Alloy

Built of aluminium, the 44.5m fast displacement model is a successor of the 40Alloy, the 40m aluminium model, which sold 10 units and features fold-out terraces in the owner’s zone and gullwing doors on the bridge.

The 44Alloy has been designed with the Zuccon International Project studio, which has worked on many of Sanlorenzo’s models. Bernardo Zuccon led the design of the external lines and the concept of the layout.

The owner’s suite is among the yacht’s focal points and features 145sqm of living area divided into three levels, with indoor and outdoor zones, a layout “never seen before on a superyacht of this size” according to Sanlorenzo. Other standout features include a large beach club that opens on three sides and a foredeck with an open area for multiple uses.

Martina Zuccon of Zuccon International Project is handling the interior of the first unit under construction, the second yacht has interiors by Florence-based architect Michele Bonan, while French firm Liaigre is working on the third unit.

Sanlorenzo is represented in Asia by Simpson Marine.