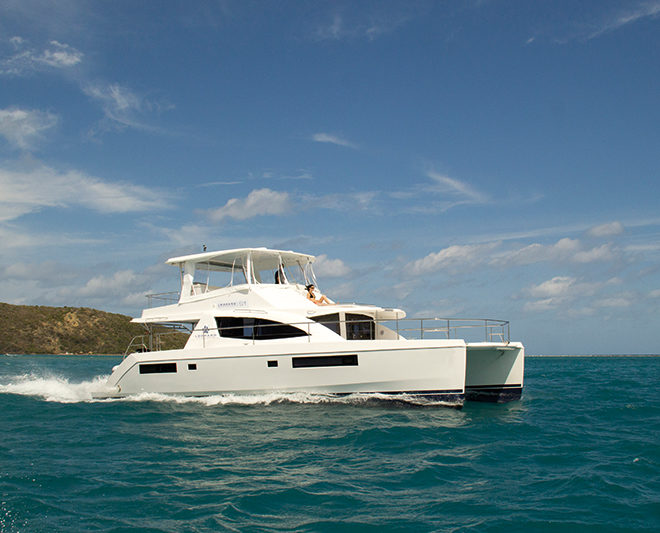 The Leopard Powercat 51 was designed by Simonis Voogd Design, Dutch master-designers and built by Robertson & Caine in Cape Town, one of the largest catamaran builders in the world. Simonis Voogd know how to design hulls, amongst other things, and this top-of-the-line powered catamaran has very respectable speed, efficient fuel consumption and the range to pop down to Florida from New York without stopping. Or from Hong Kong to Manila and back.

Robertson & Caine’s location on the cusp of the Indian, Atlantic and Great Southern Oceans makes for some very chancy water indeed. The company’s own-bottom blue-water delivery method means that every Leopard, power or sail, has had exposure to whatever the sea can throw at it. These are not just for pottering around in coastal waters. These are boats. So what do you get, apart from a proven ocean-worthy long-range family cruiser at a bargain price? 3 or 4 double cabins according to choice, an option for separate crew cabins, and the ability to personalise the interior if you order a new one. The three-cabin version provides a larger master-head and a semi-private lounge on the starboard hull. The 4 cabin version has 4 identical cabin-head combinations, two per hull. Up half a level from the cabin floor is the saloon that reaches all the internal and external spaces. Both 3-cabin and 4-cabin versions have space in the fore peaks to take additional single berths or heads.

The saloon is modestly-sized, given the room, with a kitchen-sized galley in the rear port quarter, a large 8-seat dining area forward and starboard and doorways through to the fore and aft external areas. The saloon is surrounded on all sides by windows and is always well-lit, with truly panoramic views visible from everywhere within the saloon. Even the people in the galley can enjoy the views, as well as the ergonomically-designed kitchen. The foredeck is large and open, with a sheltered seating cockpit with folding tables just in front of the doorway.

The rear cockpit is more elaborate – it has steps down to the stern and the boat-lift which doubles as a swim-platform. It has steps up to the fly-bridge and its helm position (you can have another in the main saloon). It has a large dining/socialising area and more steps leading to the gangways forward.

The fly-bridge alone is large enough to seat 8, and another galley, and a forward-extending twin sunpad. The main body of the fly-bridge is covered with a hard top light roof. At 51ft, this is a big boat. Add a beam of 25ft and you’ve got something like 1,200 sq ft to work with on the main deck alone and it draws less than 3ft of water. There’s plenty of room for engines and 1,500 litre fuel tanks which even at maximum speed of 25kts give a range of 230nm. Cruising at a nippy 17.4kts , you get over 310nm between refueling stops. And that is with twin 370hp engines – tiddlers in the big-boat world. If you really want to get the maximum range out of this boat, set the throttle at 6.8kts, turn right and head for Florida. You’ll get there, provided you started in New York, almost 1,400nm later. Take enough food.

The saloon layout has been thought through well. As befits a boat capable of handling big waves, nothing is very far away. There’s always a handle to hold nearby, a safety-rail, and despite the openness of a full-deck 50×25 layout, there’s shelter from sun and wind, as well as rain and spray.