Built in China and debuted by Multihull Solutions in Australia, ILIAD powercats from 50-90ft have attracted strong interest and sales.

Four ILIAD 50s have been ordered since the prototype was launched and evaluated last year. The first was sold during her official launch at Sanctuary Cove International Boat Show late May, and models will be shown in Phuket and Singapore.

The ILIAD 70 recently appeared at the Sydney International Boat Show in early August, a second is under way, and two bespoke and pre-bought ILIAD 60s are already on the slips. Buying now can still ensure a late 2020 delivery.

This remarkable reception is in part because ILIAD powercats are the product of decades of research. Mark Elkington, managing director of Multihull Solutions, has logged over 400 new-build multihull sales. Each one has provided an informal case study on what owners really want.

That information has been distilled into the ILIAD Project, which has assumed almost Utopian objectives. “Like the legendary Achaean ships of Homer’s epic poem, ILIAD power catamarans are designed to ride out the most treacherous conditions with confidence,” he says, waxing a little lyrical.

Custom options allow clients to pick their own preferred layout. This is not a choice of two basic alternatives, as offered by some production yards. A whole spectrum of very different arrangements has been envisaged, and costed at efficient rates, including location of the master suite.

Other variables could include timber finishes, electronics packages, luxurious fabrics, and many types of engines, albeit always watching weight and power performances in the ILIAD hulls. Fully optioned, the ILIAD 50 sells for about US$1.5 million, the ILIAD 60 for US$2.5 million, and the ILIAD 70 for US$3.2 million. The ILIAD 90 is a “work in progress” and will be released in 2022. 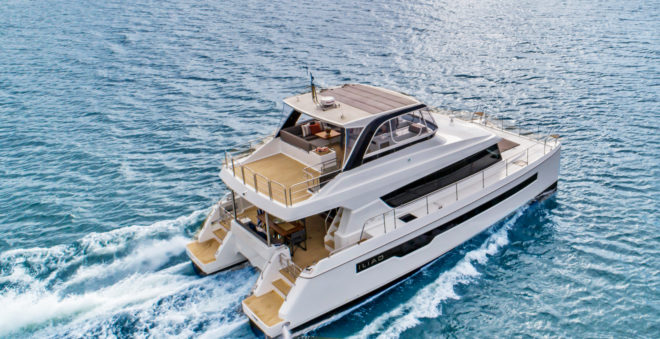 ILIAD’s chosen yard is already being expanded to handle an anticipated much-increased volume of orders, based on initial sales. Called Yuanhe Xinlong Shipyard, it is situated in Zhanjiang, a former French colonial port 50nm north of Hainan, which like Hong Kong was leased for 99 years from 1898, but returned to China after World War Two by President Charles de Gaulle.

Renowned Italian naval architect Riccardo Bulgarelli, who has lately established a full design office in China and is handling these ILIAD power catamarans, helped to introduce the yard. It also builds explorer Bering Yachts, and is familiar with Western quality and certification norms.

Elkington toured Zhuhai yards a few years ago, looking at Greek-Canadian owned Nisi Yachts, and noted that Australia’s McConaghy had already established a high-tech yard there, building among other vessels the advanced 43m composite trimaran superyacht Adastra for Anton Marden.

But he felt the work ethic and experience at Yuanhe Xinlong was more suitable for his project, and after due diligence, committed to constructing the ILIAD series at this site, not far from the Vietnam border.

This steadily expanding agency has a powerful Australia-New Zealand-Pacific marketing crescent, and an Asian network in Phuket, based on Andrew de Bruin, Peter Cohen, and Kevin Quilty looking after charters, plus Fred Coetzee in Singapore. 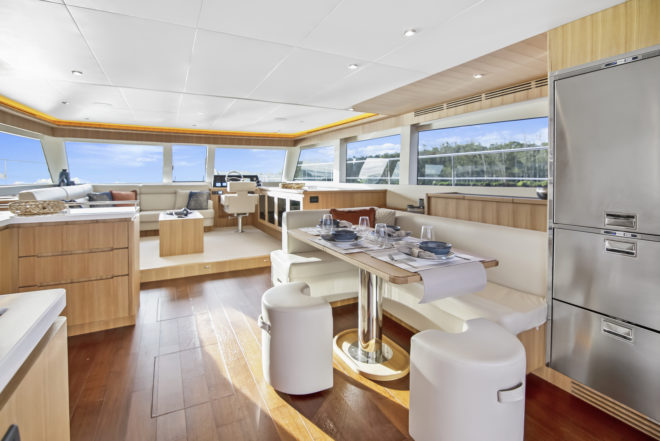 Hong Kong and China owners, of whom there are rising numbers, deal mostly with Multihull Solution’s Southeast Asian headquarters in Thailand, and plans are afoot to expand branches into Hong Kong, Seoul-Pusan and Tokyo-Osaka.

“The DNA of the ILIAD,” Elkington told Yacht Style, “is firstly that it is a good, oceangoing passage-maker. People at boat shows often don’t realise, when they are buying, that some nice-looking models are going to get very wet when they venture offshore.

“Equally, consider what I call liveaboard lifestyles. New owners, after the adrenalin of a boat show, find later when they sit in their lounges that they can see the sky, but not the water around them. We have developed instead a high bridge deck with 360-degree views.

“Your power catamaran should be like a waterfront apartment, literally a home on the water. It must have all those comforts, from relaxation areas to storage to practical galleys to private bedrooms, enabling it to cruise in remote places self-sufficiently for long periods.

“Last but not least, it must have ‘beachability’ for emergencies or for urgent attention to underwater gear. Many power catamarans can’t do that because they have IPS, or no proper keel protection, and as soon as they touch bottom they are in trouble. ILIADs are built to be beached in an emergency and serviced on the spot. They don’t need some distant marina to look after their maintenance”. 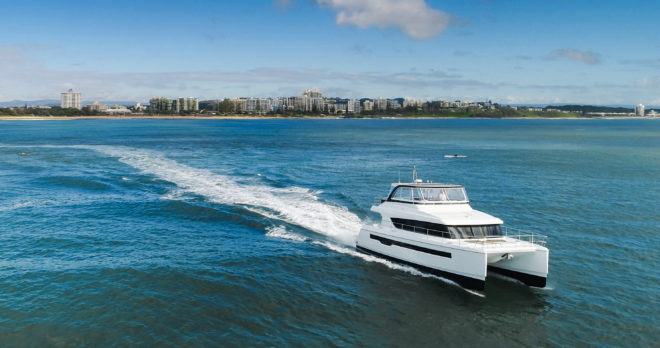 Range of the ILIAD 50 is about 2,500nm, on the ILIAD 60 circa 3,500nm, and on the ILIAD 70 nearly 5,000nm. That is enough to drive these craft across even the widest oceans, and it opens up undreamed-of possibilities for pleasure and exploring places well beyond routes of ubiquitous cruise liners. Fuel burn is less than 1.5 litres per nautical mile in long-range cruising mode.

“As sailing and now power catamarans have become incredibly more in-demand over the last decade,” says Elkington, “some sailing cat production builders have simply used the same hull for a power cat.

“This doesn’t work. A hull designed for gentle 7-8 knot sailing speeds is not necessarily suitable when pushed at 20 knots under engines. Power cats need to be designed specifically as power cats. This too is an aspect that the ILIAD series brings to the table”.

Elkington, who wrote a guest column for Yacht Style recently, remains a strong supporter of major French yard Fountaine Pajot, and has contributed many design ideas to the evolution of its Motor Yacht MY range, which has its own specific market niche, and he has a team dedicated to their sales and service.

Basically, the Fountaine Pajot Motor Yachts and the ILIAD range complement each other. The FP 37-44 feet MYs are great coastal and shorter-distance passage makers, and the 50-90ft ILIADs just take you further.

The ILIADs, though, are his latest power baby, and the youngster may be growing up a lot faster than expected.