It has been five years since the launch of Galeon’s 500 Fly and its iconic ‘beach mode’ innovation and four years since Galeon partnered with MarineMax as its distributor in the US. How’s business now? 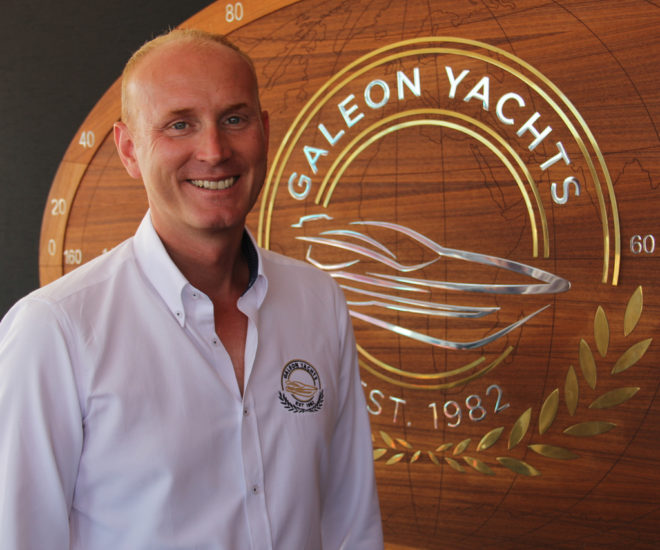 Greg Tuszynski, Managing Director of Galeon, whose dealers include Asiamarine

We are in absolutely perfect condition. We have had a golden four years and we’re growing every year. We had a beautiful 2019, increasing annual production by 30 per cent, and we’ve more than doubled our production since 2016. We’ve been selling well, we’re keeping up with production and we have the money for future investments. Economically, we’re in the perfect situation.

Tell us about your newest models, such as the 400 Fly, which had its world premiere at Boot Dusseldorf this year.

The 400 Fly is the smallest unit we have that offers the Galeon beach mode, which means it has the same drop-down sides that were first seen on the 500 then the 460. It also has other new innovations, such as a master cabin placed midships and a wet bar and grill on the swim platform.

The 680 Fly was launched at Cannes last year and was our biggest boat at Dusseldorf this year. It follows the 66ft and 64ft, but is a completely new yacht, with a new mould – it’s not just an upgrade. 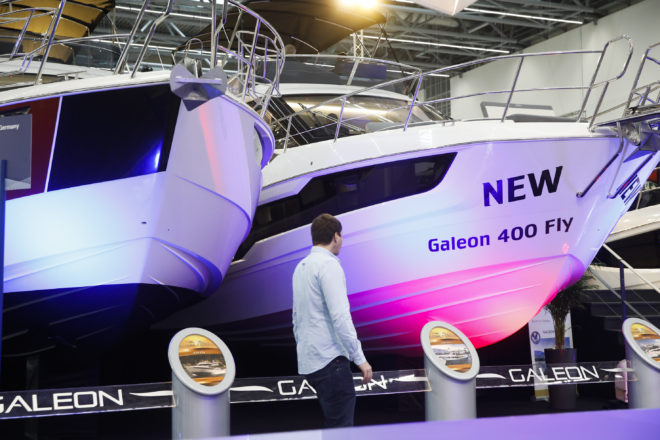 The 680 Fly appears more conventional than the 640, which won many awards since its premiere at Cannes in 2018.

The 640 Fly is full of innovations, such as the beach mode and the front door to go to the foredeck. The 640 is good for charter and a pretty fancy boat, but not every client wants this so we developed the 680, which is slightly bigger but more classic. It’s dedicated to clients looking for a more solid, classic motor yacht.

Galeon sales in the US have soared since the partnership with MarineMax in 2016. Where do you rank in your sector?

Let’s just say we are now well established in the top three in the 40-70ft motor yacht category after just four years in the US market, where we started as a completely unknown brand. The US has overtaken Europe as our biggest market and now accounts for 50 per cent of our sales.

I think we started with 15 locations in the US where you could buy Galeon yachts. Today, we have 63, plus Canada, Mexico and other countries in the Americas under MarineMax. 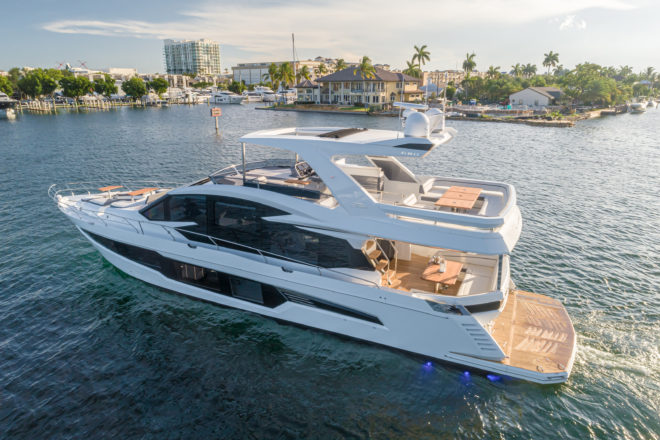 One of Galeon’s newest models, the 680 Fly debuted at Cannes last September

By 2018, we were already in the top-five and top of the European brands in the 40-70ft sector. By early 2019, we were still the top European brand, with just [American builders] Cruisers and Tiara ahead of us. Towards the end of the year, we were even higher. Although we wanted to be successful, we didn’t expect to be in this position today. Of course, we’ve put in tonnes of effort and so has MarineMax.

Were you surprised to outperform many of the long-established European builders, often regarded as the world’s leading luxury yacht brands?

Yes, this was a surprise to us, especially in such a short time. Of course, we’ve had a lot of success because of MarineMax but it’s also because of our product. For five years, we’ve been probably the most innovative yacht builder in the world and we’re very happy with the position we’re in today.

Last November, we were also very proud when Galeon was recognised for its ‘regional growth plans’ at the Boat Builder Awards in Amsterdam. It’s one of the IBI’s most important awards and it was for the company and its growth, not our yachts. 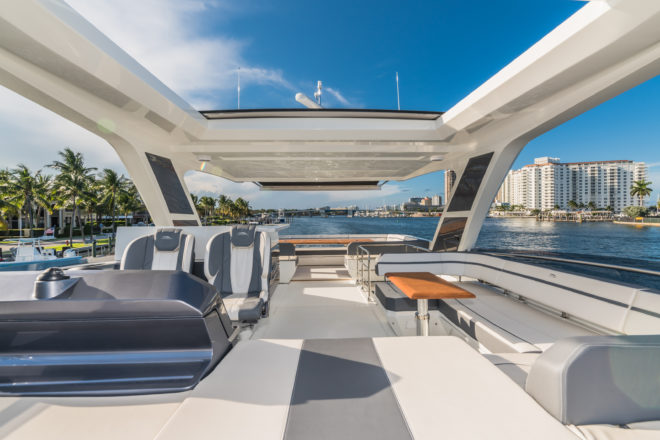 Galeon is represented by MarineMax in the US, now the builder’s biggest market

A leading executive at one of the world’s leading motor yacht builders told me, “Galeon makes us all look like dinosaurs”. Can the company maintain its reputation for innovation?

Definitely. At Galeon, we believe that to be successful, we cannot stop, that’s for sure. We need to find new solutions, new innovations and we’re constantly working on new projects. This year, we’ll be launching a new 700 Skydeck, which will be based on the same hull as the 680 Fly, but with a completely different superstructure and more sporty design.

We’re working on a new 800 that will be our biggest boat and take the place of the 780 Crystal, which is not so appealing anymore because of all the innovations on our newer models. For example, the flybridge on the new 680 is bigger than that on the 780!

We’re also working on projects for 2021. Overall, we’re working on nearly nine projects right now. We’re changing the 420 Fly into a 440, the 550 Fly needs to develop as well, and there are also drawings of an 86ft project, although that may only be ready in two years’ time. 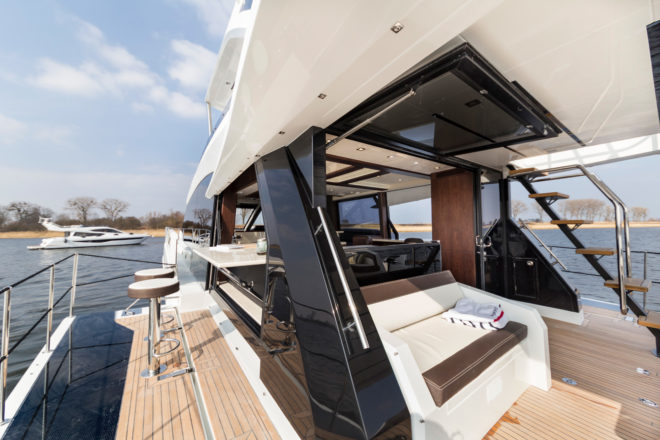 Are you still working with British designer Tony Castro on these new projects?

Yes, we’re continuing to work with Tony Castro, although I need to say that many of the new ideas and designs come from the owner of Galeon Yachts (Jacek Kobylko), who’s the son of the company founder (Wieczyslaw Kobylko).

Our owner’s biggest strength is probably his love of yachts, the product, especially the design. He spends a lot of his time on drawings, details and new ideas, not on the production line or dealer network – that’s my job. He puts his ideas on paper and suggests some to Tony Castro, asking him to design them professionally.

Some of these first ideas are pretty crazy and sometimes Tony Castro says, ‘I’m not sure that we can do it, to be honest’. The owner says, ‘Let’s look at it, try it, because we make it all in-house anyway, so even if the idea doesn’t work, we can say we tried’. That’s his philosophy.

How much of Galeon’s yachts are built in-house in your two sites in Gdansk?

We build 99 per cent of our boats in-house – we only buy engines and a few other ready-made parts, like every yacht manufacturer has to. But we barely have any sub-contractors – I have one company that does external covers for the boats, that’s all. Everything is done in-house – hulls, wood work, stainless steel, aluminium, all the mechanical, hydraulic and electrical systems, and so on. 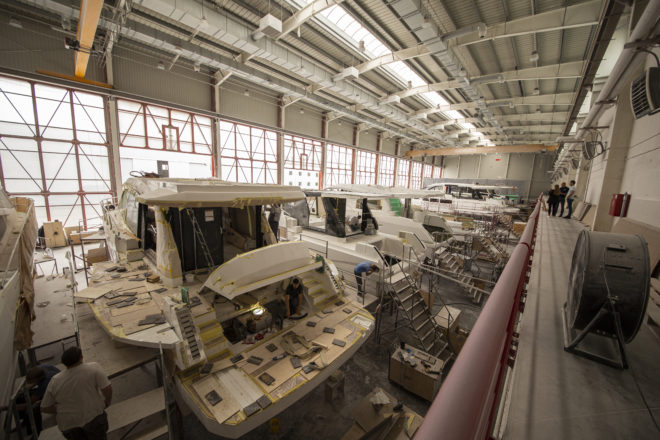 So, the most rewarding feedback I still get from clients who use our boats a lot and travel for long distances, is that we build really strong, solid boats. Some boatbuilders forget that yachts need to survive at sea, not only have a nice design and look great. We focus on building seaworthy boats with a strong hull because we know our boats need to go through different conditions. We live next to the Baltic Sea in northern Europe, so we have very good experience of tough conditions.

Do you have any plans to develop your facilities?

We have an investment plan for the next five years that includes new machinery, although this also depends on the economy and market stability.

This year, we’re going to start the construction of a new winter storage, which will be the biggest in our part of the Baltic Sea. We’re also considering to extend it and combine the winter-season storage with a year-round showroom of our boats. It’s a new idea and may bring us a lot of benefits. We always have boats coming off the production line awaiting transportation, so they can be put into the showroom for potential clients. We can even use some of our clients’ boats during certain times, so we can have models year-round.

We’ve been waiting a long time for construction permission and documentation, and now that we can start, we hope to finish the winter storage by the end of 2020 or early 2021. 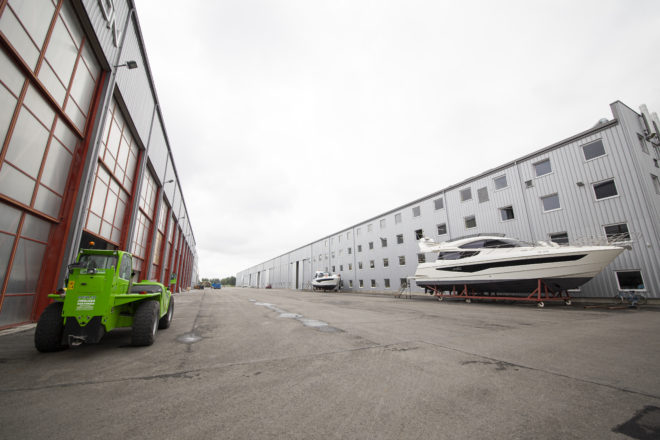 How is Galeon’s business in Asia, where you’re represented by Asiamarine, as well as Asia Marine in Thailand?

Our business with Asiamarine is growing, for sure, and it has recently doubled. We’ve been working together to develop the market and our brand in Asia. There have been a lot of efforts by Asiamarine and we can see what they’ve done.

Now, I have feedback that our brand is increasingly recognised and visible, plus there’s more interest from existing and potential owners. We can see this by the orders. We had good sales in 2019, pretty good orders for 2020 and already for 2021. We’ve been surprised by Vietnam as a new market.

I need to get out to Asia more myself, but I’ve got a couple of other places to go first, such as to support some new dealers in the Middle East and North Africa.

How are your sales in Europe?

In our size category for inboard motor yachts, we were recently No. 2 in France, No. 1 in Germany, No. 1 in Russia and we’re growing in the UK, which is a very difficult market for us because they have their own brands. Clients are usually very proud to own boats built in their own country, but we can see good results there. I’m happy about this. We’re also growing in the Balearics, like Majorca. So, where’s the big potential?

Scandinavia. It’s a good market, but somehow, we lost our share. We were quite strong before the crisis in 2008 and 2009, but we’ve had difficulty coming back. It’s one of the regions I have to focus on in the next year or two.

What about Australia and New Zealand?

We started in 2018 in Gold Coast and now we have four locations: three in Australia – Gold Coast, Sydney and Perth – and one in New Zealand, so I’m happy.

Considering your growth in recent years, what do you need to match the best-known luxury yacht brands, who have been long established across the world?

Now, we need time. Time to prove that we can be stable after such strong gains in the last few years and that we can keep up with demand. We need to ensure we maintain our reputation for production quality and after-sales service for our clients. We need to keep a good relationship with all our dealers. 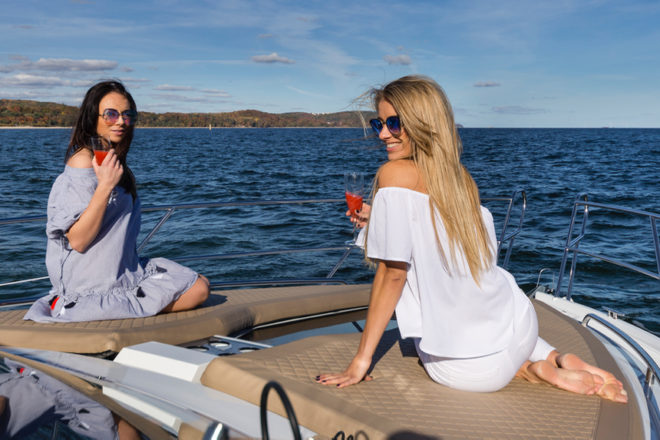 Galeon’s 425 HTS was showcased at Boot Dusseldorf in 2019

If we can prove over the next couple of years that we can maintain this position, then it will be visible to clients and our competitors that we belong in the top league along with the best-known brands in the market, who are so well established and have a much longer history than Galeon.

At the same time, we need to work on new projects because new designs and innovation are among our strengths.

I’m not sure we need to keep trying to be bigger, bigger and bigger. For a short period, maybe it’s better to be more stable and establish some frameworks. We grew a lot in the last four years and now we need to show people that we’re here to stay.