The Navetta 30 is Custom Line’s first project with Filippo Salvetti and ACPV, with the two design studios also uniting for the Navetta 48.

Custom Line is “looking ahead to the next 25 years” with its upcoming Navetta 30, which marks the first time the Italian brand has worked with both exterior designer Filippo Salvetti and also Antonio Citterio Patricia Viel (ACPV), the Milan-based architectural studio. 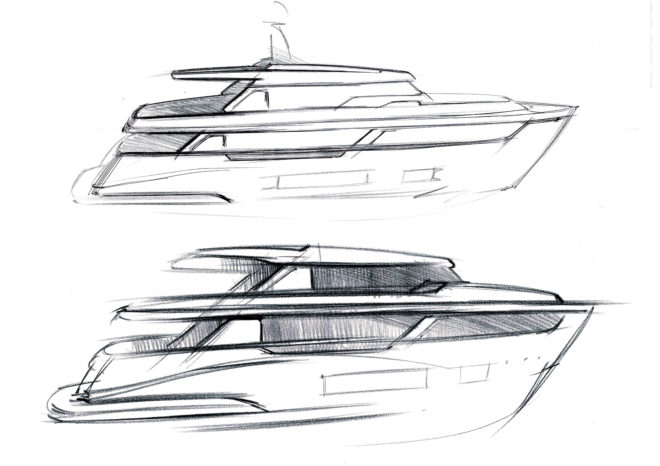 Filippo Salvetti’s early sketches for the Navetta 30, due to the launch this year

The smallest model in the current Custom Line range, the 93ft 3in yacht is just 4in longer than the former Navetta 28, but has 25 per cent more volume, with the first unit expected to be launched later this year.

Custom Line has established itself as one of the world’s premier superyacht builders, releasing 20 models and more than 250 units since it was founded in 1996 by Ferretti Group, primarily to build larger models than those produced by Ferretti Yachts.

Today, its portfolio features the Navetta semi-displacement line that also includes 33, 37 and 42 models, and a planing line currently comprising the 106’ (see REVIEW) and 120’ designed by Francesco Paszkowski, with all models built at the Ferretti Group’s Superyacht Yard in Ancona. 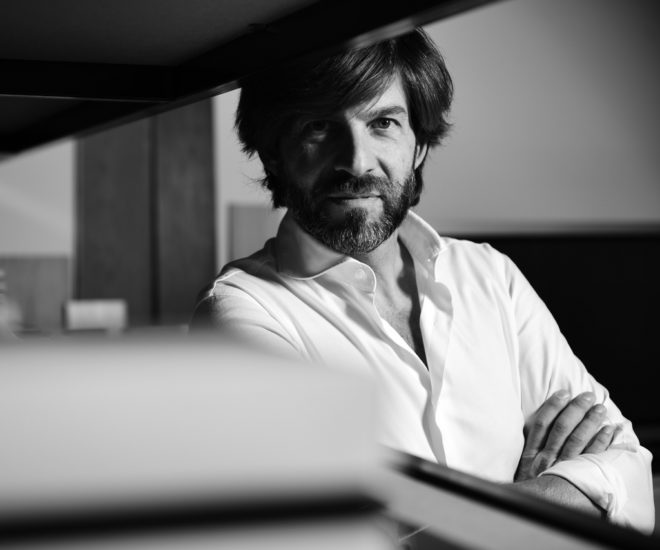 Stefano De Vivo, Ferretti Group’s Chief Commercial Officer, says the desire to look ahead to Custom Line’s next quarter-century prompted it to engage Salvetti and ACPV on the four-deck, wide-body Navetta 30.

“We felt we needed to define the next 25 years for Custom Line and we chose two great design studios. We’re convinced that the platforms and designs you see on the Navetta 30 are the next step for the next 25 years,” De Vivo said.

“We were looking for designers to introduce something different, but at the same time it all had to work. Salvetti has been working with Ferretti Group for the past few years, so he brings fresh ideas but understands how to evolve the history of the Custom Line brand, and we wanted Citterio Viel to bring us to the next stage of Custom Line interiors.

“They’ve really shown us the next step in internal architecture. We picked Citterio Viel because the studio makes buildings from the inside out, as well as furniture for some of the best brands in Italy, so they’re very industrially minded. They’re not only artists; they design items that have to work. Every detail on this yacht works.”

Salvetti is the designer behind the new Ferretti Yachts 670 that premiered at last year’s Cannes Yachting Festival and also the brand’s upcoming 500 and 1000 models, which are also set to introduce the ‘next generation’ for the iconic brand.

Advanced soundproofing – including a ‘floating floor’ that reduces sound from the engine room to the living areas – contributed to a tall superstructure that reaches 22ft 10in above the waterline, not including radar mast. In comparison, the 137ft Navetta 42 is just 13 inches taller yet more than 44ft longer. 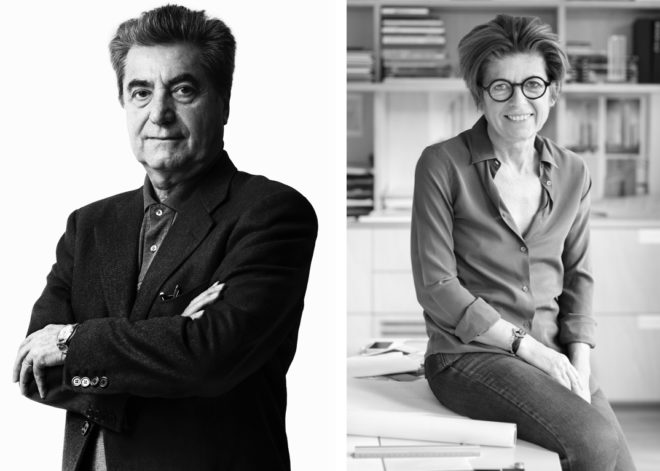 The Navetta 30 also has the same number of decks, four, as its three big brothers designed by Zuccon International Project, but doesn’t have a hardtop, one of many design features Salvetti has employed to ensure the yacht maintains stability and a balanced exterior.

Another is a horizontal black line along the upper-deck bulwark, which also marks the join between the hull body and superstructure on a yacht that has a 78ft 3in waterline length, so is classified as a sub-24m pleasure boat.

“The Navetta 30 has introduced a wide body from midships forward and is much bigger overall than the Navetta 28, including a much larger sun deck,” said Salvetti. “We’ve cleaned up the lines a lot and incorporated a lot of advanced design and engineering to reduce sounds and vibrations, setting standards you can’t find on another yacht of this size.” 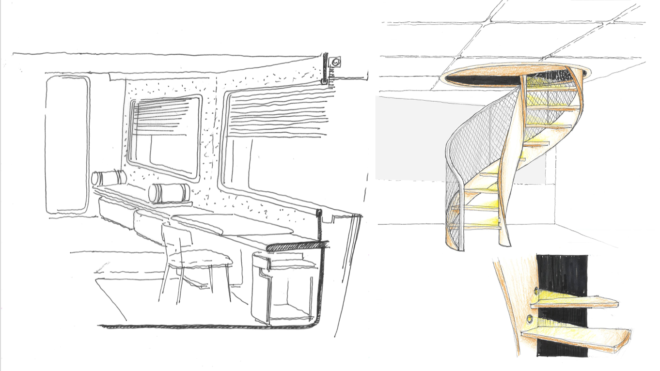 ACPV worked closely with Salvetti on his evolving designs, with co-founder Patricia Viel explaining that the interior design was developed in partnership with the engineers and architects who designed the hull.

“This enabled us to control every single volume perfectly, so the lighting and interior design schemes fit in flawlessly around the shape of the hull,” Viel said. 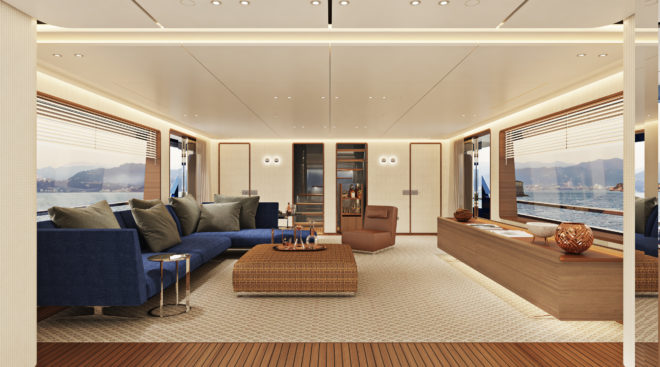 The main deck in Texture (above) and Wooden (below) 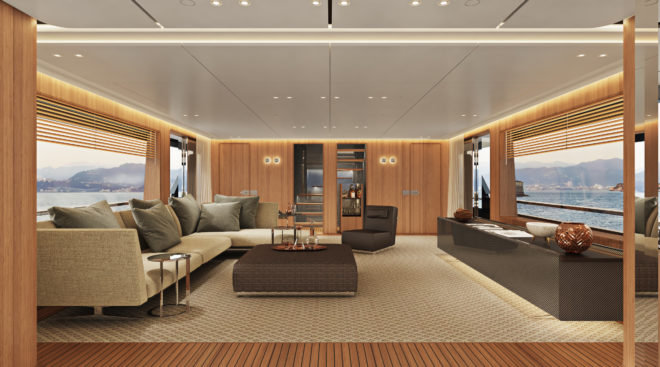 “We wanted to create an informal life on board, so we used a lot of teak and leather, which are strong, natural materials,” says Viel, a yachting lover.

The main deck features a large cockpit and saloon, plus a full-beam owner’s suite and lounge forward, while the lower deck includes four guest cabins and a crew area. The upper deck offers a variety of layouts between the indoor and outdoor areas, as well as a ‘sunset lounge’ forward of the pilothouse, while there’s a large sun deck to top it off.

“For us, the upper deck is the centre of life on board. The interior is very connected to the outside and we offer this area in different layouts,” Viel says.

The master suite in Texture (above) and Wooden (below)

“It was an amazing experience working on this yacht. I’m in love with the sea, so a lot of the design ideas stem from my own experience. It’s very different designing an interior for a hotel group than for a yacht, which moves and is exposed to the elements, but we’re very comfortable with this.”

Twin MAN I6 800mhp engines give a top speed of 14 knots and a transatlantic range of 2,150nm at 10 knots, while MAN V8 1000mhp – as fitted on the first unit – and MAN V8 1200mhp are other options. The yacht is equipped with stabilising fins, which can be fitted in conjunction with Seakeeper systems on request.

Custom Line’s future models include a 140’ by Paszkowski and a Navetta 48, which will be the brand’s biggest-ever yacht – and is being designed by Salvetti and ACPV.