The Custom Line 106’ is a powerful addition to the Italian brand’s planing range, with the first hulls showing its focus on customisation.

A wise shipyard knows that it’s not always about re-inventing the wheel. When a design is proven to work well, a smart approach is to recreate the yacht’s best attributes in a different size, attracting a different client base. Cue the new Custom Line 106’, which takes its styling and strong focus on indoor-outdoor living from its big sister, the Custom Line 120’. 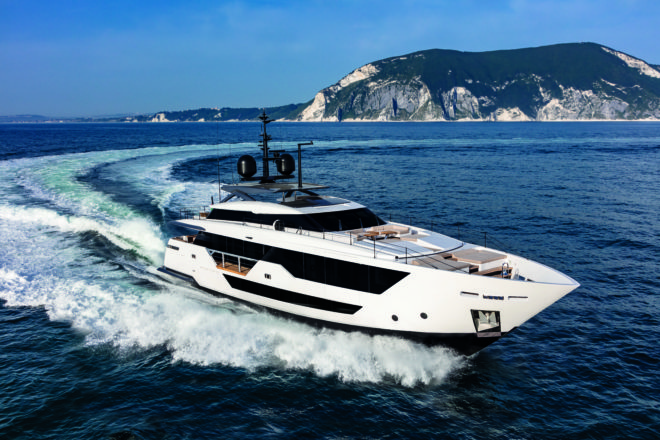 Like the 120′, the Custom Line 106′ is designed by Francesco Paszkowski

“The idea is to create the beauty of the 120’ in a smaller size, with some variations,” says Karin Paggi, Head of Sales for Custom Line at the Ferretti Group.

One of those variations is immediately evident when stepping on board at the main deck aft. In the 120’, the angled aft door opens completely, connecting the aft deck and saloon seamlessly. In the 106’, which has  a smaller space to work with, this is interpreted with an electrically controlled, accordion-style door, which still opens to foster a connection between indoors and out. 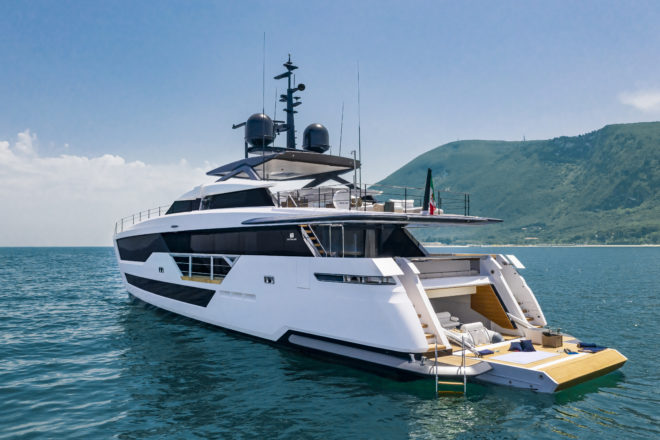 The garage door folds down to allow access to the tender and toys, and create an extended beach club; the sun deck (below) also offers uncovered lounging areas

Built in GRP with teak decking and a carbon-fibre hardtop, the first 106’ was launched by the Italian builder in 2019. Designed by Francesco Paszkowski, who also penned the 120’, the exterior is crisp and clean, with large, angled windows and sharp exterior lines that give a sense of speed. 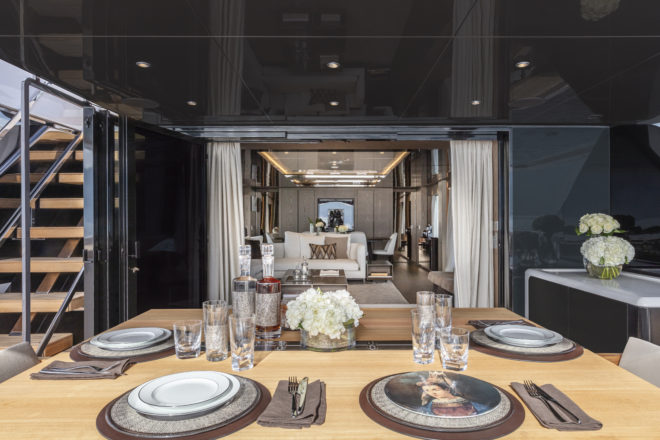 The cockpit has a large, adjustable table for al fresco dining

Hull one debuted at last year’s inaugural Venice Boat Show, but the official world premiere of the new model took place at the Monaco Yacht Show, where hull number two was on display.

The second hull was started for a specific owner, a previous Ferretti Group customer. He was able to give his input in terms of not only decor but the layout, making subtle yet palpable modifications throughout the yacht to put his stamp on it. This is a testament to Custom Line’s commitment for its yachts to be customisable and suit the needs of each individual owner.

Photos show hull one, while the article refers to hull two in which there is a much lighter-coloured decor in the interior, as well as some notable design differences

The owner of hull two, for instance, preferred to have a dining area on the main deck aft, where you’d normally find more of a lounge area. The sofa can still be converted into a big sunpad when it’s time to unwind after a meal.

Below, the garage hatch opens to reveal its cache of tenders and toys, which on this yacht includes a Williams 505 Diesel Jet tender and a jetski. The bow has additional storage space, including room for a second jetski and a sizeable crane to launch it. 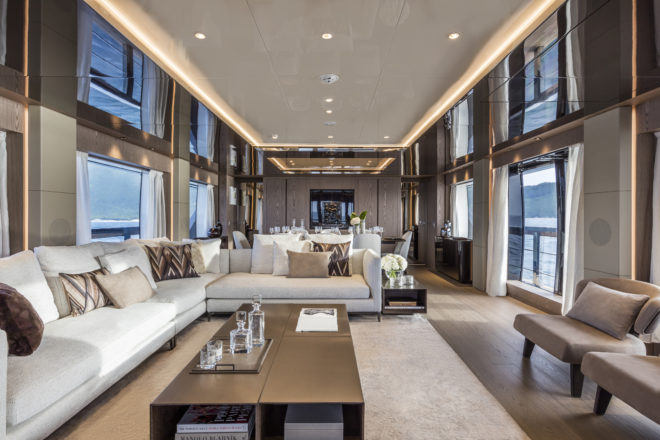 The layout of the large saloon can be customised, while options include a sliding door on the starboard side, which was selected for hull one

According to the yard, the owner also put his stamp on the interior design. “The owner (of hull number two) wanted something very fresh and light,” Paggi says of the interior. By comparison, she points out that hull one had shiny lacquer and a combination of strong colours, as seen in the accompanying photographs.

In hull two, the owner sought something simpler, with an all-white ceiling, lighter colours on the soft goods and matte wood finishes, thus creating an extremely light and bright space. The saloon literally reflects the light, as the forward bulkhead is covered in mirrors. It’s a nice touch, making the room feel larger and continuing the theme of wide, open spaces. 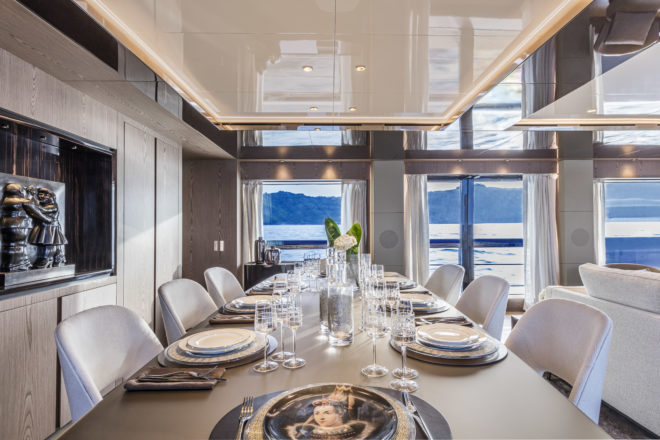 The formal dining area is situated forward of the saloon

Attributes from the 120’ retained in the 106’ include the full-height windows in the saloon, which give a great connection with the sea outside, while there’s an option to have sliding doors on either side.

Another design feature seen in both Custom Line planing models is the use of columns in the main saloon, which are upholstered in leather. Besides being a decorative element, these columns are practical, hiding speakers and technical equipment. 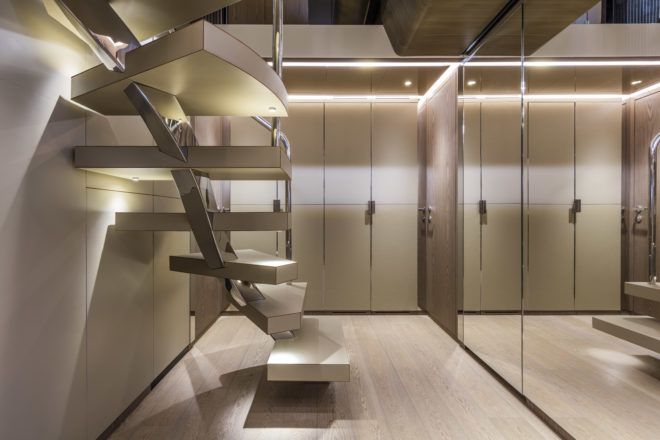 Midships, a door leads off the starboard foyer out to the side decks and up to the bow. Inside, the bright, airy foyer connects to an open stairwell, which allows light to pour in to the lower deck, which has two VIP and two twin cabins. Both twins have Pullman berths, taking the guest capacity up to 12.

The full-beam master cabin is forward on the main deck and begins with a dressing room with a walk-in wardrobe, across from a small desk. The original master en-suite has his-and-hers bathrooms with separate doors either side of a central shower, but the owner of hull two preferred to have an extra walk-in closet and only one bathroom to share. 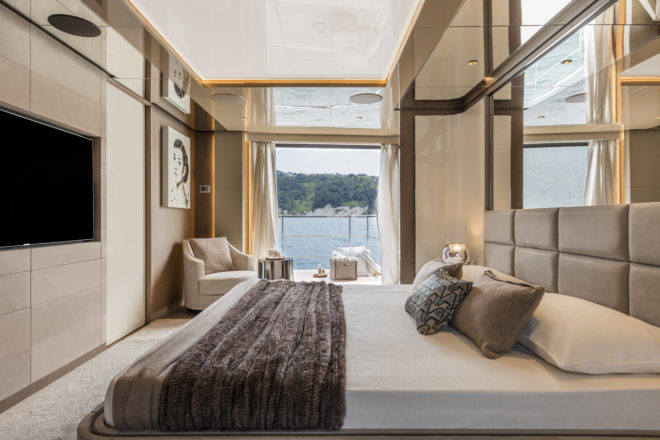 On hull one, the main-deck owner’s suite features a drop-down balcony 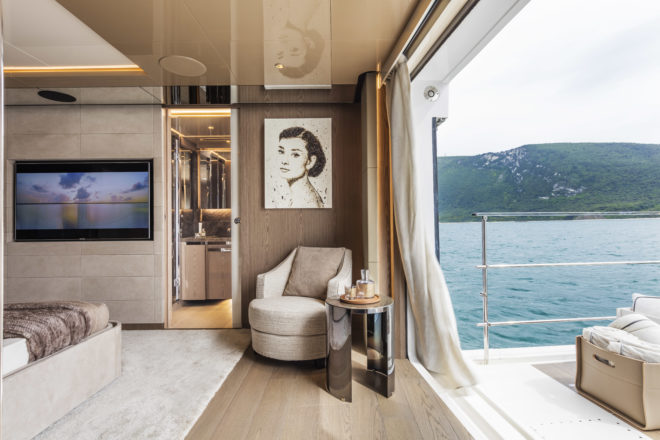 The owner also had a hand in designing the streamlined headboard, bed frame and bedside tables. Keeping to his minimalist preferences, the bed and tables are the only furniture in the room.

“He kept the master really simple,” says Paggi. “Usually, we would add an armchair with a small table, a desk, a chest of drawers, but he wanted to keep it open and clean.” 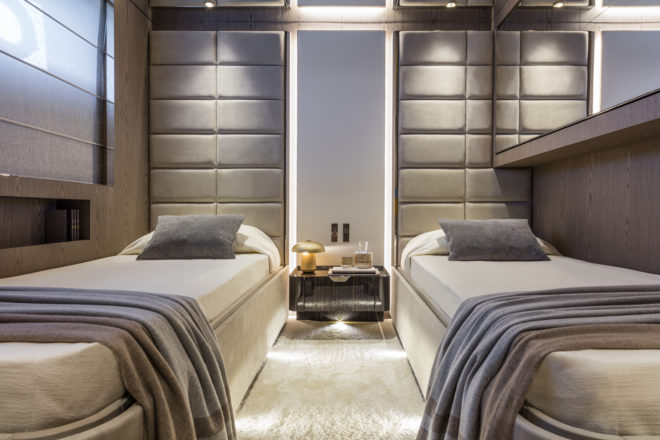 The bed itself is set quite low, which gives the illusion of even more space. A balcony can be added to the master to further open up the room, as seen in the photos of hull one.

Like the furniture found inside, the outdoor furnishings on the upper deck are also low-slung and minimalistic. Glass partitions help protect against the wind while still allowing wide-open views. The client for hull two made a few modifications in this area, too, requesting a big bar with stools. “He wanted a little bit more of a lounge feeling with the big bar,” says Paggi. 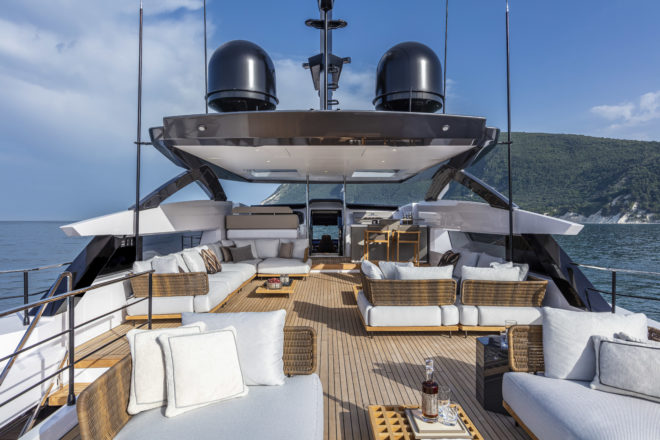 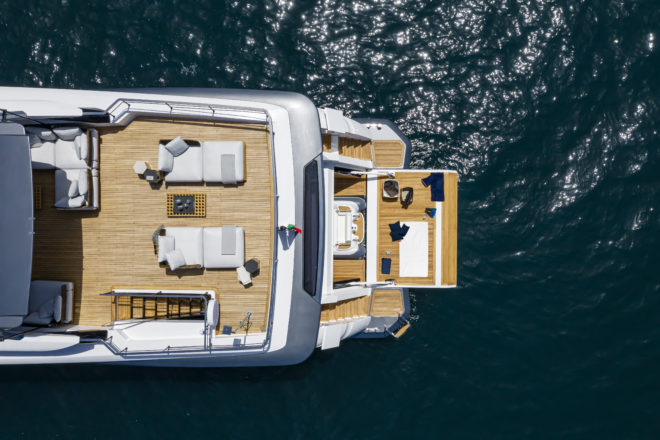 A TV lowers from the ceiling and rotates so it can be viewed forward or aft. There is also a noticeable lack of pillars, which is made possible by the use of a carbon-fibre hardtop to keep the construction light but strong.

This 106’ doesn’t just thrive on creating feelings of openness and connecting indoor and outdoor areas – it also makes excellent use of the outdoor living space that’s available. There’s an impressively large foredeck lounge, for instance, with a settee and tables right in front of the bridge, and steps leading down to two large sunpads. 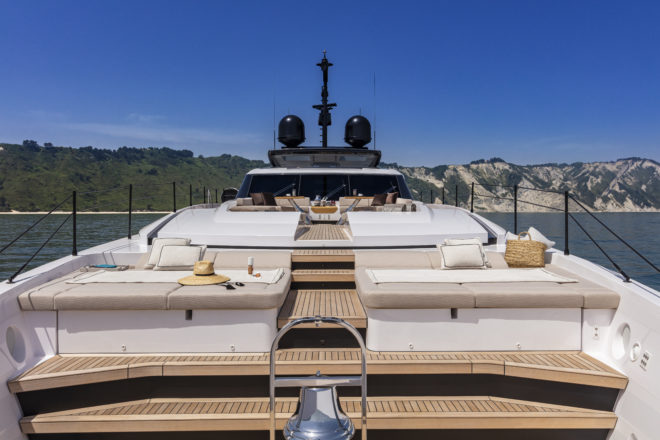 The exceptional foredeck features a central passageway that links an outdoor lounge, separate sunbathing zones and a working area in the bow

Ferretti Group plans to keep pushing this winning formula forward  in the Custom Line planing range. The next project is the tri-deck 140’, which will have a bigger volume yet still be performance-oriented, affording top speeds around 22 knots.

“The idea is to keep the same styling, but getting bigger in size,” Paggi says.

As the saying goes, if it ain’t broke, don’t fix it. Custom Line knows they have a winner on their hands and will, fittingly, keep pushing this holistic design further and further.