Another Voyage for Madmen begins. Like the first Golden Globe event 50 years ago, sailors are trying to sail solo, non-stop around the world in 32-36 feet yachts, using only sextants and loglines for navigation.

The Retro Golden Globe Race is not for the fain-hearted yachtsmen. Each year, only a select, skilful yachtsmen will race across the ocean using “retro sailing” techniques sans modern equipment. Thy will use simple strong boats, traditional seamanship skills, grit, passion and lots of determination. This feat is more than just a physical challenge, it’s a test of real human spirit! 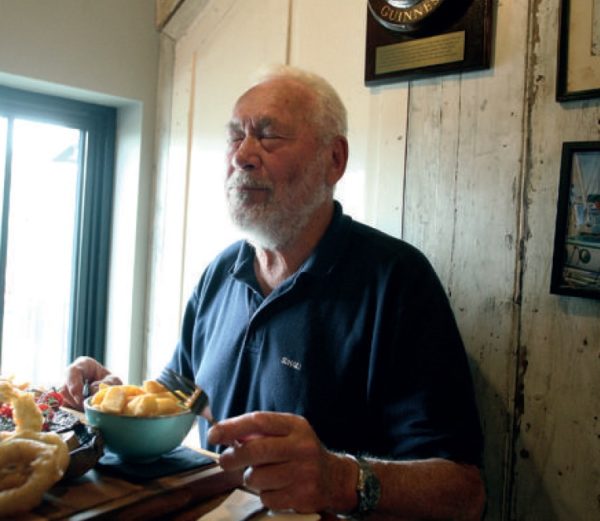 Sir Robin Knox-Johnston is a living legend in Retro Globe Race. In 1969, he became the first person to perform a single-handed non-stop circumnavigation of the globe and was the second winner of the Jules Verne Trophy, together with Sir Peter Blake.

Last time nine yachtsmen set out, and only one got back. Sir Robin Knox-Johnston was first to achieve the feat, taking 312 days in the tiny 32-foot ketch Suhaili. His competitors came to grief in various ways, not least Donald Crowhurst, who faked his voyage across the Southern Ocean, waiting for his false positions to catch up with his real one off Argentina or possibly ashore. Latest of several movies about this remarkable episode is called The Mercy starring Colin Firth, and yet another version is to be released this year. Crowhurst is alleged to have committed suicide by jumping overboard when he realised he had been found out, but even this story has raised doubts. Another competitor, Commander  Bill King, definitely did commit suicide. One of several books about the race itself is called A Voyage For Madmen by Peter Nichols, and it begs the question why, half a century later, another 17 multi-national yachtsmen, maybe joined by a late Italian starter, would want to do the same thing again. There was to be no cash prize, unlike the £5,000 put up by The Sunday Times in 1968, worth about £80,000 now, until race partner boatdshed.com put up another £5,000 at the 1 July start. 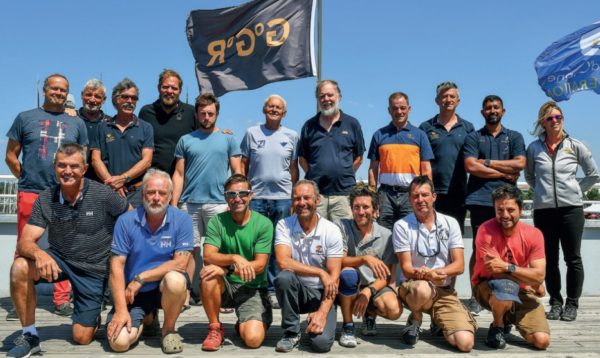 How many of this next lot are going to make it home? What new perils will befall them en route? Why spend 240-250 days alone at sea, estimated to be the earliest elapsed time of the 36-footers, often in huge seas whipped by freezing gales? Who are these people? Before the 1 July start at Les Sables d’Olonne in France, where the four-yearly Vendee Globe solo non-stop race for stripped out 60-footers also begins, I met up with the skippers in Falmouth, England, as they marked the 14 June 1968 date when Sir Robin set off.

I’d been there myself, as an adventure writer for the Sunday Mirror, the world’s fifth largest paper, when Fleet Street was still going strong. We backed the future Sir Robin with a contract that far out-stripped the prize money, and were delighted by his success. But that had looked far from certain. His boat was small and heavy, and Sir Francis Chichester, chairman of judges for the Sunday Times, said somewhat disparagingly that Robin may not get much further than the end of the English Channel, which was quite close by.

We hunkered down at the Marine Hotel before his departure. Local St Austell Brewery has now restored this historic nautical site as The Chain Locker, and it was here we returned this year for a rolling celebration that also included Royal Cornwall Yacht Club and St Mawes across the estuary. In the interim, Robin at my invitation had begun sailing in San Fernando and China Sea Races, first aboard Charlie Smith’s Castro 63 Rapid Transit and later on former RHKYC Commodore Vic Locke’s Holland 40 Bugis. 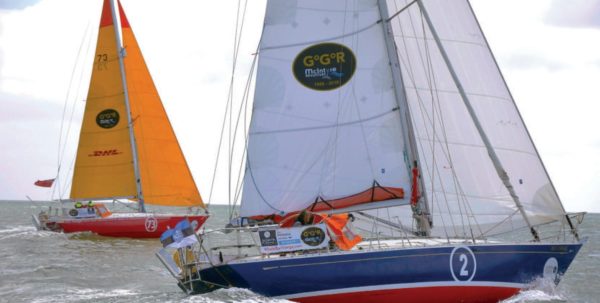 Then he launched the ongoing Clipper Cup around-the-world races, which saw fleets of yachts built first in Shanghai and then Qingdao. But back to the present. It was hard to know what to make of the latest skippers, who ranged from Britain’s attractive 28-year-old Susie Goodall, the only lady in the race, to 73-year old Frenchman Jean-Luc Ven Den Heede, who has five prior circumnavigations to his credit. Robin had been difficult to assess too. We sent him to see a psychiatrist. The report said he was “distressingly normal”.

What is “normal” about setting off on this sort of voyage? The retro race itself was the idea of Don McIntyre, a famous Australian sailing adventurer in the Antarctic and re-creator of amazing passages such as that of the deposed skipper Bligh of the Bounty. His partner Jane Zhou, whom he met at a boatyard in Zhuhai, acted as financial director. McIntyre was inspired by Knox-Johnston’s effort, and is no stranger to the trials and tribulations of raising money for exotic expeditions. Herein lies a clue to the reason this latest fleet has formed. Because the boats are so small, they are actually affordable by individuals. How else would such people get the chance for a solo non-stop passage around the world in a race-in-company format? The chance of sponsorship comes next. Susie Goodall has already signed up DHL, for example, and many others have attracted backers who hope to profit from subsequent publicity. 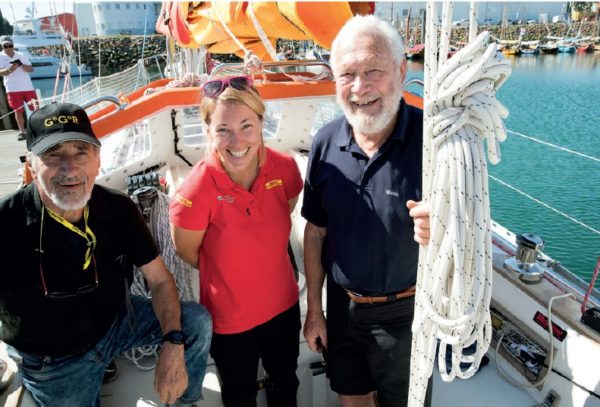 Italian Alex Carozzo, another entrant in the original Golden Globe event, with Sir Robin and Britain’s Susie Goodall, youngest competitor in 2018 and the only lady

Abhilash Tomy, the Indian Navy pilot and experienced long-distance yachtsman who is sailing a replica of Robin’s Suhaili called Thuriya – check out your handy Sanskrit dictionary – has his expenses mostly covered by the Navy. After that comes the fame and fortune that may be engendered by a successful passage. Perhaps a book deal? Other lucrative offers? Look at what happened to Sir Robin after sailing a little teak boat built in Bombay around the world.

This said, and surveying the assembled company gathered at Royal Cornwall Yacht Club for the official dinner of the pre-race Falmouth leg, they’re still a weird mob. Gnarled salty French solo sailors in particular have a sort of rapport with the sea that is tangible. Bernard Moitessier, sailing in Robin’s race, developed a love of the waves that saw him sail on past Africa’s Cape of Good Hope for a second time and eventually end up in Tahiti, instead of heading back up the Atlantic. The latest lot seem in the same mould. Susie was being supported by a solicitous girlfriend in this intense male company, but appeared quite capable of holding her own, and back at The Chain Locker a tall bearded guy wandered around in an Australian flag, saying he was cheering for the South Australian of the two Down Under entrants. 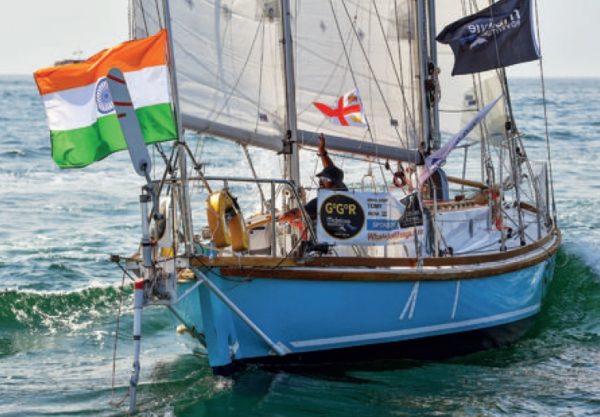 Memories. My Kiwi photographer mate Bill Rowntree, with whom I covered sundry wars and invasions as well as adventure stories back then, had motor-sailed around from Portsmouth with Robin on Suhaili and built up a new photo portfolio to contrast with his 1968 effort. Another photographer, Barry Pickthall, who used to be the yachting correspondent for The Times, encountered at events like the sailing Olympics in Pusan in South Korea and the Kenwood Cups in Hawaii, is acting as media liaison man for the event from his PPL picture studio, easily googlable.

Philippe Péché in a Rustler 36 PRB had the lead when this was written, only hours after the start, to meet our deadline. There is a long way to go, and if the original Golden Globe Race is anything to go by, many more strange seafaring stories have yet to emerge. For further background, read Yacht Style #42.