Fangio’s Mercedes-Benz W196 Formula 1 car is the most expensive car to be sold at auction. 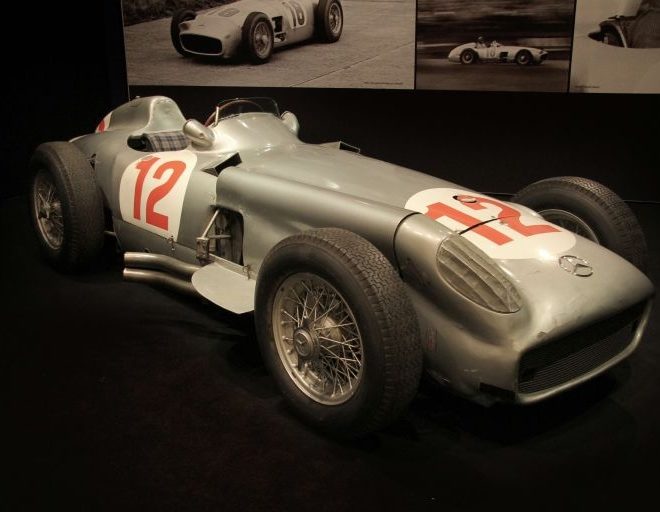 What a difference a year makes. Only 12 months ago the list was a mix of marques from Bugatti to Rolls-Royce, but this year the list has seen more movement than the pop charts with four new entries and seven of the top 10 places being occupied by Ferraris. When this car came up for auction, no one even dared hazard a guess as to an estimate. And that’s understandable, as this Mercedes is more than a car, as a vehicle driven by Fangio, it is a piece of automotive history and one that won Formula One races. There’s some dispute as to whether it should make the list, because it is not road legal, however, there’s no doubting that at $29,650,095 (€22,701,864) it is the most expensive classic car ever sold at auction. Why did this car cost so much? Because if one enterprising US Ferrari importer Luigi Chinetti, hadn’t taken Enzo – that’s Enzo Ferrari – to one side and had a whisper in his ear, telling the genius where he was going wrong, it would never have been built.

Chinetti suggested that Ferrari make a convertible version of the 275 GTB/4 to make it easier to sell to his customers, and the N.A.R.T. Spider by Scaglietti was born. Only 10 were ever made and when this car sold for $27,500,000 in August, the proceeds went to charity. In third place is the first of two Testa Rossas: this one sold at auction in 2011 for $16.39 million thanks to its incredible racing pedigree. What’s more it is actually the prototype model on which all subsequent Red Heads (Testa Rossa means red head in Italian) were based. The car was painstakingly restored after it crashed on the track and burst into flames. Next up is the third car to make it into the list in 2013, in fact this 250 LM only just made the cut as the auction was held in November. At $14.3 million it broke all previous records for its model but like all of the Ferraris at the upper end of the list, the premium paid is down to the importance of the car in terms of Ferrari’s history, legend and mythology. This was the first mid-engined V12 the company ever produced and inspired a new design language. Another Ferrari and another car sold within the last 12 months. Until the 250 LM went under the hammer, it also held the distinction of being the most expensive closed-in Berlinetta Ferrari ever to sell at auction. However, one thing that it still holds onto is its success on the track. It is still to this day one of the most important cars in Ferrari’s racing history. The second Testa Rossa and, back in 2009 when it went under the hammer, it was the most expensive Ferrari ever sold at auction. This one managed to win Le Mans three times. Finally, something other than a Ferrari. But, like the car in first place, this is also a Mercedes but a very different one at that. An example of this incredibly elegant, but rather sporty in its day, open-top cruiser once belonged to Formula One boss Bernie Ecclestone.

He sold it at auction for a then-record of $6.3 million in 2007 only for another of the 26 remaining examples to fall under the hammer at last year’s Pebble Beach, fetching $11.7 million. In eighth place, yes, another Ferrari and a very handsome one at that. The California models were so called because they were aimed at Californians, who wanted to cruise the boulevards with the top down, but then floor the accelerator and tear it up in the mountains. The price paid for this long wheel base model may well have been influenced by the value of the car now sitting in 10th place. The Ford GT40 was one of the greatest sportscars in history. Built to beat Ferrari, it did just that – just not in this list. What makes this example even more important is that as well as a racing pedigree, its former owner was none other than Steve McQueen. It might be pretty low down in the chart but it is still at $11 million it the most expensive American car ever to go under the hammer. In last place is one of the most attractive cars that Ferrari ever built and, like the GT40, it’s a car with a famous former owner – James Coburn. What’s more, when this car was sold in 2008 it made the headlines because it was the most expensive car to sell at auction. The successful bidder, UK TV and radio broadcaster, Chris Evans revealed that he bought it because he fell in love with it, and that he had only intended to buy a couple of Ferrari posters at the sale, but got carried away.