The German automobile’s latest car offering is lighter, bigger and more powerful than ever before. 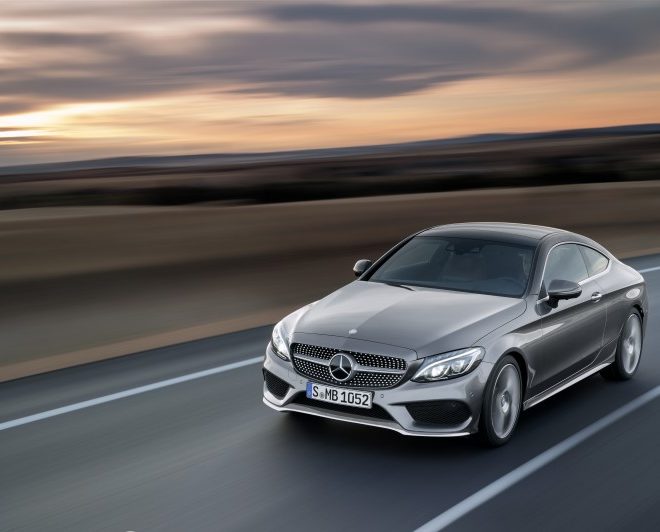 “Seduction of the heart and mind”, ran Mercedes-Benz’s tagline for its new-generation C-Class Coupe. And sure enough, the car is all we’ve come to expect of a C-Class Coupe, except it’s now a little sexier, and a lot more intellectual.

The first thing that strikes you about this car is its sporty façade. The new coupe is given a longer bonnet – there’s 60 millimetres more of it – and a raised window line for a sleeker, more aggressive look. And if you notice a couple of similarities between this and the S-Class, you’re not alone – the same sophisticated fascia, and horizontally oriented tail lights are reminiscent of its big brother.

This updated C-Class coupe is powered by various engine options of course. For example, there’s a 2-liter, turbocharged four-cylinder version and a twin turbocharged V6…and then there’s the C63 AMG. Featuring the German brand’s new Airmatic suspension, the car sees continuously adaptive damping according to its five driving modes: eco, sport, comfort, sport + and individual, the latter being customizable according to personal driving preferences.

Its interiors are equally captivating. With a wheelbase extended by 80 millimeters, the C-Class Coupe is fully 95 millimeters longer, and 40 millimeters wider than before, so that means a roomier interior for all passengers. Mercedes Benz then decks this extra space with integral sports seats, its sportiness emphasized by special upholstery color combinations of saddle brown and black, porcelain – in the Edition 1 – nut brown and black with turquoise topstitching.

Despite its discreet appearance, the Mercedes-AMG C 63 Coupe is a force to be reckoned with. Internally, a 4.0-liter V8 Biturbo powers the machine, its two turbochargers uniquely positioned inside the cylinder “V” instead of outside the cylinder banks for a more optimal throttle responses, lower exhaust emissions and more compact dimensions. The upgraded edition is marked by the AMG’s characteristic 18-inch light alloy wheels, special bumpers and sills and its diamond radiator grille features pins in chrome.

This car might be touted as the S-Class’ more affordable cousin (read less interesting), but against opposition (in this case we use the BMW 4-Series and Audi A5), the car proves to be stellar. While the trio all have the license to look very good, the BMW’s black plastic inserts pale in comparison. Its unfussy, uncluttered interiors and decent hardware, however means that it’s a joy to ride in nonetheless. Meanwhile, the Audi, though physically steely and industrious, has been reported to be quite a bit of a squeeze, its smaller stature no match for the Beemer, and definitely not the Mercedes. The BMW might be the most powerful of the lot engine-wise, but it also provides the least torque. The Mercedes C-Class might have unfavorable fuel economy stats due to its automatic gearbox, but its V6 produces more torque and provides an extra 200cc more than the Audi and the BMW.