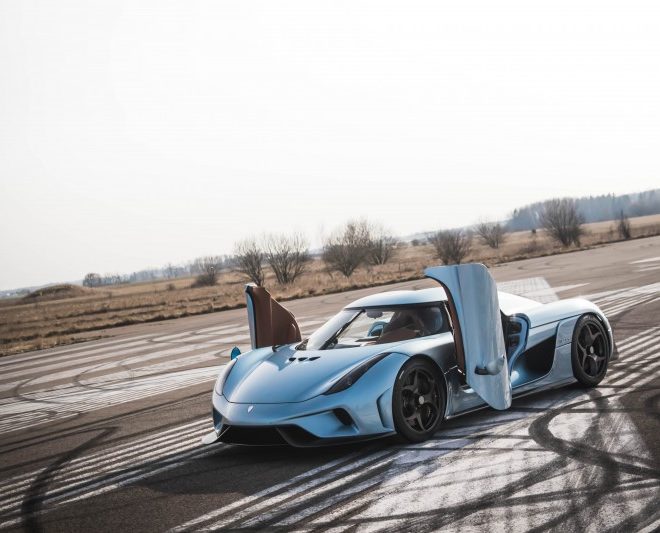 This is a car that would make Jeremy Clarkson yell “POWERRRR”, because with 1500+ Hp output and 2000+ Nm of torque, the new Koenigsegg Regera easily qualifies as the nuclear missile of automobiles.

Merely a concept when it was unveiled last year at the Geneva Auto Show, the hybrid hypercar’s name is Swedish for “to Reign”, and rightly so for a machine that offers an unprecedented combination of power, responsiveness and luxury. With only 80 handcrafted models in production, each car heralds a new era of Megacar performance. The Regera will do 0 to 100km/h in 2.8 seconds (about how long you’ll need to read this sentence), hit 200km/h in 6.6 seconds, and 300km/h in a blistering 10.9 seconds. If that’s not enough to impress you, it’ll gladly oblige nought to 400km/h in 20 seconds (very useful if you’re in a car chase and have a nice long straight to take advantage of). Like the Agera, this speed is generated by its drysumped twin turbo, DOHC, 5.0 liter V8 in tandem with the electric propulsion of the Koenigsegg Direct Drive Transmission (KDD).

Invented by Christian von Koenigsegg, the patent-pending system eliminates the need for a gearbox, which also means less weight and energy losses, just direct transmission from the engine to the wheels. Unlike the Agera, the Regera can afford to ease up on the internal combustion engine given its already immense power, so it is given smaller, faster spooling turbos that enhance the engine’s driveability and response. Only the brightest and best have worked on the Koenigsegg Regera’s 620V battery pack. Electric Supercar virtuoso Mate Rimac and his team created the most power-dense battery pack ever created for a road-going car, producing 9.27kWh of energy and taking up 67 liters of volume. Located in the most protected area of the car – the carbon-aramid chassis tunnel – a fully charged cycle provides 50km on pure electric drive. Including the battery, the KDD system only weighs a mere 88kg, an unprecedented weight to electrification ratio for any other hybrid Hypercar despite having a larger battery capacity and more electric power. Clearly, the car is a vehicle of many firsts. The engineers at Koenigsegg know full well that drag is every speed junkie’s worst nightmare, and so have made its rear wing – a lightweight work of carbon fiber art – fully foldable into the body work to reduce drag when cruising. If you can’t yet afford a butler to open the car door for you, the Regera has also got you covered. As the world’s first fully robotized car, you have the option of opening and closing the doors via the remote or smartphone via the ‘Autoskin’ function. Its wing mirrors are also auto-folding and the car seats remember how toasty you like your bottom to be with a heating memory function. The Regera’s lavish leather-furnishings are totally old school, its cozy interiors a stark contrast to the exterior’s state of the art silhouette. These are the last things you’ll notice when you’re going past 200km/h, but just so you know, the car is also fitted with a 9” infotainment system, 3G and Wi-Fi connectivity, supreme sound system and Apple CarPlay.