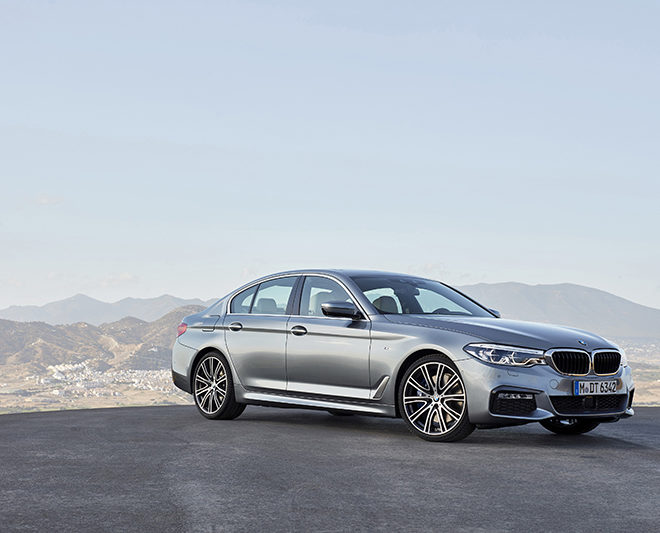 Cutting-edge connectivity and semi-autonomous driving tech are just two of the goodies BMW delivers with the seventh generation of the now-legendary BMW 5 Series.

Shunning both the recently concluded Paris and upcoming LA Auto Shows in favor of a standalone reveal event, the BMW 5 Series is proposed as “the epitome of the business sedan,” according to company chairman, Harald Krüger. “We see technological leadership, emotionally rich products and digitalization as essential factors in achieving success.”

And this is key. The BMW 5 Series offers steering and lane control assist at speeds of up to 210km/h, which boggles the mind. It can also help the driver change or stay in lane; take evasive action when a collision risk is imminent; check for traffic at junctions and crossroads; autonomously respect the speed limit; and, even boasts a voice control system that can respond to natural language — i.e., this is a car that likes to have a conversation. But with all that tech, it is very easy to detach the owner from the driving experience so it is important to note that this is not a fully autonomous vehicle. And that’s why much of the new connectivity tech on board the BMW is about cutting stress and saving time, such as the ParkNow system that finds and pays for parking spaces ahead of time. And of course the remote parking system that debuted on the car’s big brother, the 7-Series, where a push of the smart key button is enough for the car to maneuver automatically into even the tightest of spaces.

Other highlights in this regard include a concierge service, gesture controls for the infotainment system and wireless smartphone charging and connectivity. You won’t need to plug your iPhone into the car’s system to access CarPlay. It is automatic. All of which should free the driver up to enjoy the car’s new engine variations, which will initially include a 2-liter four cylinder 252hp unit (0-100km/h in 6.2 seconds) and a three-liter straight six with 340hp on tap and a 4.8 second 0-100km/h time. Though faster and more powerful than existing engines, both are more fuel efficient and by mid 2017 drivers will also have the choice of a hybrid  and an all-wheel drive M550i xDrive model with a 462hp V8 under the hood and a 4.0-second 0-100km/h time. That should be enough to keep keen drivers happy until the next M5 comes along.

“The seventh generation of the BMW 5 Series points the way into the future, as we have defined it with our NUMBER ONE > NEXT strategy,” said Krüger. “I’m in no doubt that the new BMW 5 Series will set new benchmarks technologically, but also have huge emotional appeal.”