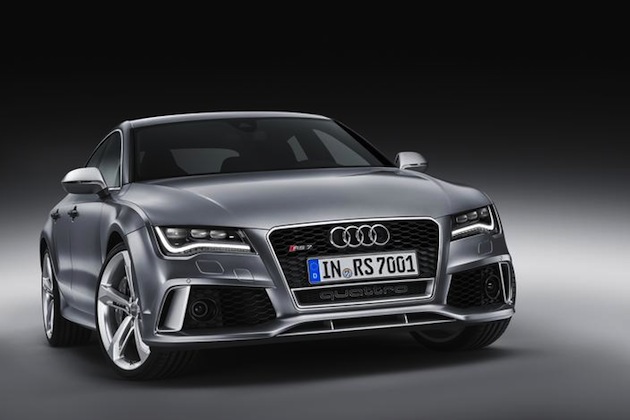 Capable of hitting 62mph (100km/h) in under 4 seconds and of propelling the driver and three passengers onto a top speed of 189mph (304 km/h) the Audi RS7 Sportback is designed to go toe to toe with the Porsche Panamera, Maserati Quattroporte and even the Aston Martin Rapide.

Under the curved hood is a twin turbocharged 4-litre V8 that can churn out 560PS but, thanks to cylinder-on-demand technology, which shuts down four cylinders when power and out-and-out performance are not required, can return a combined fuel economy of 28.8mpg. This nod towards economy is further assisted with stop-start technology, which shuts the engine down when the car is in neutral, and thermal recapture technology that re-channels energy released from braking or deceleration to the battery and ancillary systems.

The engine is paired with the automatic Tiptronic eight-speed gearbox system (also found across the Porsche range) so that the ride can be as smooth or as involved as the driver wishes and prevailing conditions allow. Permanent all-wheel drive (one of Audi’s hallmark technologies for more than 30 years) ensures the car stays firmly planted on the road at all times, while reworked adaptive air suspension irons out the bumps in the road when cruising or heightens the feedback and reduces body roll when performance is demanded.

The Audi RS 7 Sportback is expected to go on sale this summer at prices starting from $130,000 for the base model.