Audi today issued a teaser picture and some details of an all-electric SUV that it will launch to rival the upcoming Tesla Model X. 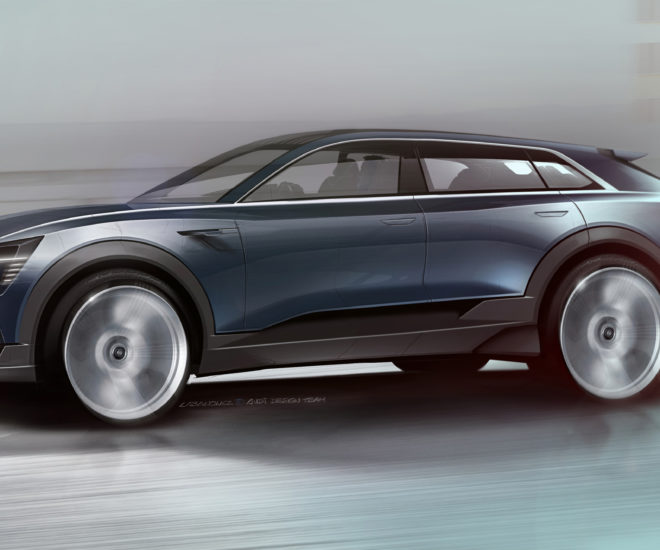 German automaker Audi has announced its plan to present a new electric concept at the Frankfurt Auto Show, taking place from September 17-27.

The Audi e-tron quattro concept will offer a peek into the future of the brand’s electric-powered sport SUVs.

Size-wise, the Audi e-tron quattro concept falls between the small Q5 and mid-size Q7, which makes sense since the production version is expected to be called the Q6 e-tron quattro.

The Audi e-tron Quattro is also a pioneer in its class. Designed from the ground up as an electric vehicle, the shape is designed to reduce drag with an aerodynamically optimized underbody that’s completely closed, helping to achieve a low coefficient of drag of 0.25, a record for the SUV segment according to Audi. The brand has also confirmed that the Audi e-tron Quattro will utilize batteries supplied by LG Chem and Samsung SDI that will give the vehicle a range of 310 miles on a single charge.

These lithium-ion batteries will be positioned below the passenger compartment, in between the front and rear axles, which will help lower the center of gravity and provide better balance.

The electric drivetrain, for its part, was developed using knowledge gained in the development of the R8 e-tron electric supercar. On this SUV model, there will be three electric motors, one on the front axle and two on the rear, creating the vaunted Audi all-wheel-drive system.

In designing its first fully electric SUV, Audi is throwing down the gauntlet to Tesla and its upcoming Model X. Supposedly, not content to watch the competition from the sidelines, BMW is assessing proposals for an all-electric SUV that could be derived from its upcoming X7 model.