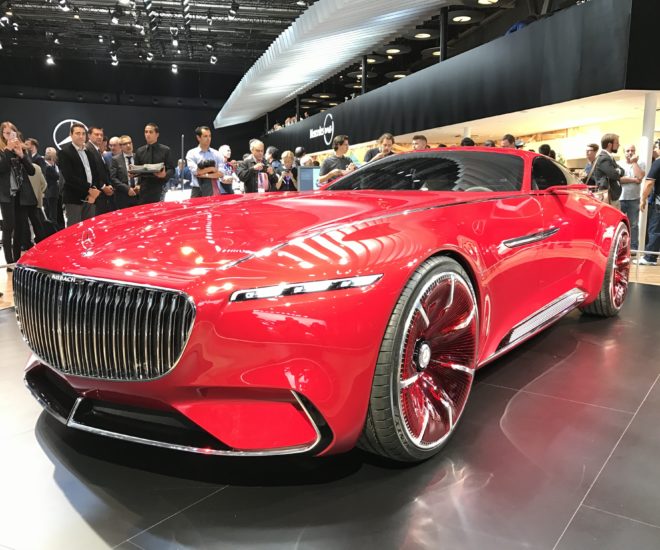 Against all odds, the Paris Motor Show is managing more than a few high notes this year, as seen in these five superlative cars. This list includes a few prototypes because, well we just liked the look of them, but overall these are the buzz-worthy models. Before we get to those though, we do have to say that the Volkswagen I.D. concept car seems like a really great idea and Peugeot has done the unthinkable and (literally) elevated the 5008. These aren’t typically the sorts of cars we cover but we’ll expend a sentence here to give them props.

Returning to the main event for us, we ask once again that you bear with us as we revisit the Ferrari LaFerrari Aperta. It was either that or take another look at the Vision Mercedes Maybach 6, which we’ve seen quite a bit off (including the featured image, top). Trust Alfa Romeo to name a car Giulia and then amp it up to hyper masculine proportions. Just take a gander at the lines on this sedan and tell us that doesn’t just scream testosterone-fueled muscle. The new high-end Giulia Veloce features all-wheel drive, and two different engine options: 210hp (diesel) or an all-new 280hp (gasoline). On the occasion of the show, the diesel version is being launched in France. We can’t resist suicide doors and the Citroën CXperience helpfully obliges this silly tendency. The AFP reports that this concept car is almost certainly a forerunner to Citroën’s upcoming C5 generation. This 4.85-meter-long (16ft) sedan stands out with its two-box design, 22-inch wheels and, of course, those suicide doors, Seriously, if this gets made in this form, we look forward to reading about all the mishaps those doors will get the owner into. This hybrid vehicle (gas/electric) promises 300 horses in total. The front end also showcases what could be a future brand identity, with resigned daytime running lights. Like its hardtop sibling, this new hypercar offers hybrid hyper performance (we just love this tongue-twister), thanks to an electric motor and V12 engine working in concert. The result is a sprint to 100km/h in under 3 seconds and a top speed of 350+km/h – all without a solid roof. It would have reportedly cost more than 2 million euros but Ferrari has saved you all that dough by not having any more models to sell. Ok so here is a concept that is so workable we aren’t even sure why Honda is bothering with parading about the prototype. Well, maybe the Japanese automaker just wanted to start rubbing it in rivals’ faces early – the full production model will hit the streets in the second half of 2017. The concept car stands out with its carbon fiber side skirts and splitter – it adds a triple exhaust pipe that makes us wonder what it sounds like. This mean machine also boasts smoked glass headlights and LED indicators. If we’ve never featured a car just because it was bananas (can you say Faraday Future), this will take care of that deficiency. Basically, the Renault Trezor is car-sized eye-candy with a hood and roof that lift up! That alone would have sold us on including this car here but that is not the end of the story. The exposed interior you can just make out here is futuristic and connected, full of ultra-high-definition touch screens. This GT concept has an entirely electric powerplant that Renault has developed directly from the world of auto racing (Formula E). It promises 0-100 km/h (0-62mph) acceleration in under four seconds.