Concorde may be gone but the dream of supersonic flight is alive and well, as seen in the reveal last week of a prototype of a new supersonic commercial jet. 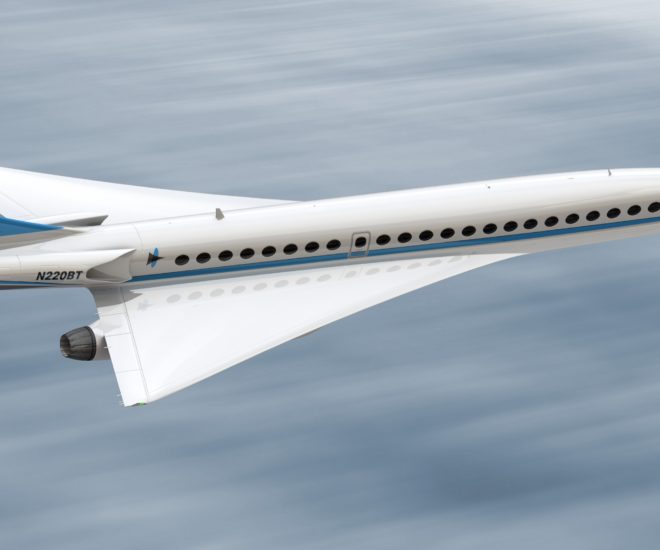 Concorde may be gone but the dream of supersonic flight is alive and well, as seen in the reveal last week of a prototype of Sir Richard Branson and co’s new supersonic commercial jet. In case you’ve forgotten what this might mean, supersonic flights could cut international flight times by as much as half. This is one step closer to becoming reality after Branson and an ambitious start-up unveiled a prototype of their “Baby Boom” jet in the US last week.

After first announcing their partnership back in March, Branson and the Colorado-based aeronautics company Boom pulled back the curtain on their XB-1 Supersonic Demonstrator – also dubbed Baby Boom – in a Denver hangar this week.

The specs for the next-generation jet are impressive: At Mach 2.2, the aircraft would travel at more than twice the speed of sound, and 2.6 times faster than any other airliner.

That means flying from New York to London in 3 hours and 15 minutes – half the normal flight time for a commercial aircraft.

Travelers flying from Los Angeles to Sydney, Australia would also shave 8 hours and 15 minutes off their flight, and cross the Pacific in just under seven hours.

And flights between San Francisco and Tokyo would be halved, arriving in 5 hours and 30 minutes.

What will breaking the sound barrier feel like? According to engineers, flying at 60,000 feet – nearly twice the altitude of commercial aircraft – takes fliers above most of the turbulence to offer a smoother, inaudible ride.

The prototype unveiled in Denver this week was a smaller but technically representative model of the future supersonic jet.

The first test flight is expected to take place late next year, and the first commercial flight to take off in 2023.

Despite the demise of the Concorde, Boom believes the world is on the brink of a new era in aviation with breakthrough aerodynamic design, advanced engine technology, fuel efficiency, and lighter composite materials that translate into lower ticket prices.

That means the ability to price transatlantic flights for $5,000, making it comparable to business and first class fares.

Sky-high tickets for the Concorde and declining load factors contributed to an unsustainable business model.

The Boom aircraft will be configured to seat 45 passengers. As supersonic flight is banned over the US, routes will be primarily international such as New York to London or San Francisco to Tokyo, flying subsonically when over land.

The first subsonic test flight will be conducted near Denver next year, and a supersonic flight conducted from Southern California.

Boeing and Lockheed Martin are also developing their own supersonic aircraft.