A glass of Bordeaux has never looked this tempting and, indeed, so contemporary. Good design is only part of the reason of course. 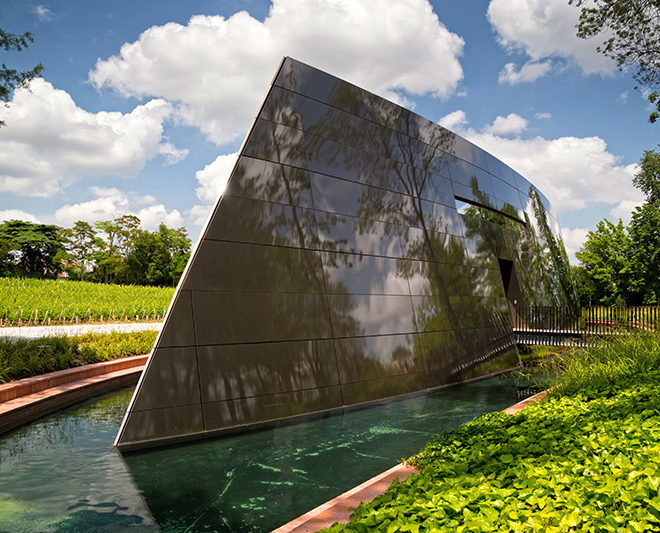 Behold the new cellar of Château les Carmes-Haut-Brion, a winery that dates back to 1584…yes this ultra-modern building is a wine cellar. It looks more like a contemporary art sculpture that might interest our friends at Art Republik. In fact, the gleaming edifice in Bordeaux is indeed the newest cellar facility in the vineyard. designed by Philippe Starck and Luc Arsène-Henry, it just screams out for a proper visit and tasting, which is just what the AFP Relaxnews is doing. Previous tours have gone to Château de Béru and Bollinger. Bought over by the Pichet group in 2010, the Château les Carmes-Haut-Brion is one that combines traditional winemaking with modern architecture. In the trusted hands of designer Starck and architect Arsène-Henry, the new facilities, which cost 10 million euros, are all set to produce a 2015 vintage that we hope to enjoy. One key element that stands out for its design, is the barrel cellar. The futuristic building has many torn as some see it as an upturned boat surrounded by vines while others view its as the blade of a knife planted in the soil.

Spanning 2,000 square meters and four levels, the building provides a view of the Bordeaux vineyards with a roof terrace. Embracing its strong ties to the art world, the Pichet Group even has a vat in the cellar that was painted by the designer’s daughter, Ara Starck. It is the first in a series which will involve a new artist being given carte blanche every year. Those looking to visit Château les Carmes-Haut-Brion, a one-hour tour of the vineyard that covers the barrel cellar and the rest of the property. To cap off the tour, guests can sample two of the estate’s two wines: Château les Carmes-Haut Brion and Le Clos des Carmes Haut-Brio. What makes this estate a producer of wine that forms the benchmark of Pessac-Léognan wine is the location where the milder weather reduces the risk of cracks. The owners favor integrated grape growing, and the soil (which consists of gravel, clay and sand) is only treated with natural products. The grapes are harvested by hand. Les Carmes-Haut Brion is a respected wine often mentioned in best wine guides. Ideally located between Bordeaux, Pessac and Mérignac, the château produces wines that are highly sought after all around the world. Its reds are renowned for their elegance and balance. This delicacy is well known to wine lovers eager to take their Les Carmes-Haut Brion on an aging journey.