White sands and stunning blue waters aren’t the only attractions in the Bahamas, now you can make a splash and chill out with native pigs on the island. 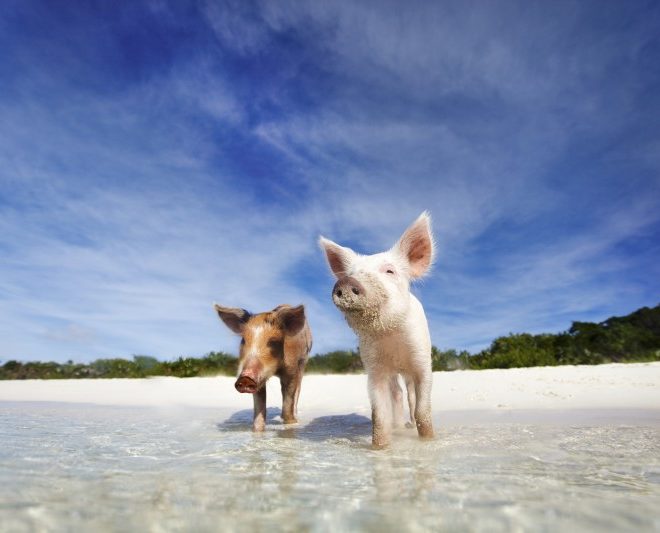 There’s lots to do in the Bahamas – explore blue holes (that’s what happens when sink holes appear on the seabed) and caves, snorkel above a bed of coral reefs and swim with pigs. Yes, a colony of 20 pink and black pigs live on the otherwise uninhabited island, situated at Big Major Cay in the Exumas archipelago. Indeed, this brings to mind the Angry Birds movie but these guys are all cuteness. No rough stuff here.

These friendly critters are so used to human contact that they’re perfectly tame; most even enjoy a swim with tourists. The curious case of their presence on Big Major Cay has been widely debated. Some believe they were transported by sailors who intended to return to cook them but never returned. The pigs have since lived their lives frolicking on the island while growing in population, as pigs are wont to do when left to their own devices.

The offbeat beach can be reached by boat, with trips that run from the main island of Great Exuma or from Staniel Cay. The only other attractions, besides the adorable pigs, are its pristine white beaches and stunning azure waters. Tour operators are on hand to provide boat rides where visitors can watch and feed the pigs. If you’re feeling more adventurous, you can even lounge next to them on the beach, or swim alongside them in the Carribean Sea for a truly unforgettable experience.