Is it still cattle class if you are the only passenger? One woman had a random experience with true luxury: a commercial flight to Guangzhou all to herself. 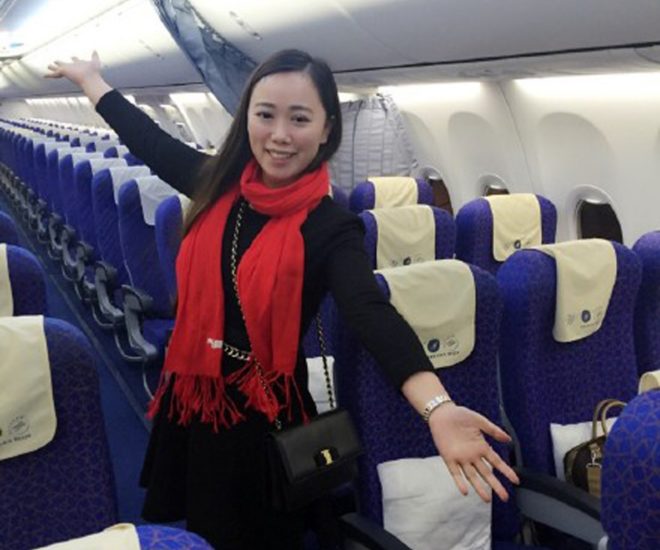 Is it still cattle class if you are the only passenger? While news reports continue to filter in about 100,000 people stranded at Guangzhou train stations this week, trying to head home for the Chinese New Year holidays, one woman had a random experience with true luxury: a commercial flight to Guangzhou all to herself. The short version of this tale is that the woman, whom the AFP names as Zhang, simply outlasted all the other passengers on her China Southern flight, which was delayed for 10 hours.

Zhang made a star of herself on social media, posting photos showing row after row of empty seats on the China Southern plane as it flew from Wuhan. Apparently, the other passengers could not handle the wait-time and did the sensible thing by finding other flights; Zhang toughed it out and had the Boeing 737-700 plane all to herself in the end.

On her social media feed, made public now by multiple news reports, says the experience was tuhao, using a slang term for the nouveau riche.

The AFP reports that China Southern schedules show the flight is normally operated using a Boeing 737-700 aircraft, which generally seats 137 passengers. This got us curious about how much this flight would have actually cost, with just one passenger. Apparently, the one-and-a-half-hour flight would have cost more than $10,000 (stats sourced from here) and that is just based on the cost of keeping the plane in the air for that amount of time. For some context, that amount will fly you long-haul on first, with a return ticket included.

Nevertheless, a social media troll pointed out a little niggle: despite all that extra room on the China Southern flight, Zhang was not upgraded from cattle class. To be fair, we have no idea if the flight was one of those all-economy propositions and really, to have an experience like this one is something money can’t normally buy. We think it might just be priceless.

This story was written in-house, based on news reports, with an image supplied by the AFP