Marking 500 years since his death, Noordbrabants Museum brings back one of Bosch’s forgotten creations. 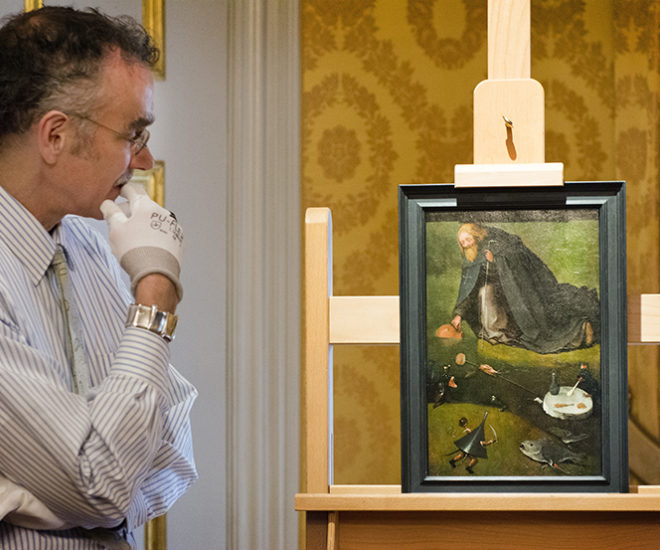 After a five-year odyssey, international experts have confirmed that a long-lost work of art is indeed the work of Hieronymus Bosch. Earlier this week, ‘s-Hertogenbosch, the enviably named hometown of the only slightly less enviably named Hieronymus Bosch unveiled a painting by the artist that had been long forgotten.

While it had been in storage at the Nelson-Atkins Museum of Art in Kansas City Missouri, the painting had been attributed to one of Bosch’s followers. That is of course until researchers of the Bosch Research and Conservation Project (BRCP) were able to determine its authenticity. Using infra-red technology, the researchers determined that there was a match between the original painting with other panels by the artist. Known for his nightmarish visions on canvas, his work earned him the nickname of “The Devil’s Painter” after his death. Titled “The temptation of Saint Anthony”, the recently confirmed painting is believed to be part of a triptych or a larger panel.

The canvas, which was likely painted between 1500 to 1510, “is a significant addition to the small body of existent work produced by Hieronymus Bosch,” the researchers said in a statement. “Although the image was heavily retouched and overpainted during a 20th century restoration, Bosch’s hand is still clearly recognisable in the original brushwork,” they said.

The painting was unveiled on Monday at the Noordbrabants Museum in Bosch’s hometown which has succeeded in bringing together over 20 of his 25 or so surviving works for an unprecedented retrospective which opens on February 13.

“The little monsters in the panel are typically ‘Boschian’,” the researchers said, highlighting a monster with a fox’s head, and a toad clambering out of the water. Even a floating sausage can be found in other artworks by Bosch.

It is the second work that the Bosch Research and Conservation Project (BRCP) has recently determined was by the Dutch master. Late last year, the team also revealed that a drawing called “The Infernal Landscape” was drawn by him.

The exhibition marks the culmination of a nine-year quest by museum director Charles de Mooij to reunite Bosch’s unique artistic legacy in the place where he worked, lived and died. It kicks off a year of events in the medieval town in southern Holland to honour its most famous son who was born Jheronimus van Aken in around 1450.

The newly-discovered work will join 20 paintings and 18 other drawings among about 100 works on display in the exhibit “Hieronymus Bosch — Visions of Genius” which runs until May 8.

But Bosch’s most famous work, a triptych called “The Garden of Earthly Delights” which journeys from Adam and Eve in the Garden of Eden to a terrifying vision of hell, will not be on display. It hangs in the Museo Nacional del Prado in Madrid, and has never travelled abroad.

But in a remarkable coup, the Prado has agreed to allow Bosch’s “The Haywain” to leave Spain for the first time in 450 years.