Norwegian Cruise Line‘s new ship the Norwegian Epic will literally host the coolest bar at sea, the company confirmed this week. The Epic has achieved a cruising first by introducing an on-board ice bar in partnership with SVEDKA Vodka so that guests can enjoy drinks in -8 degrees Celsius after a hot day on the […] 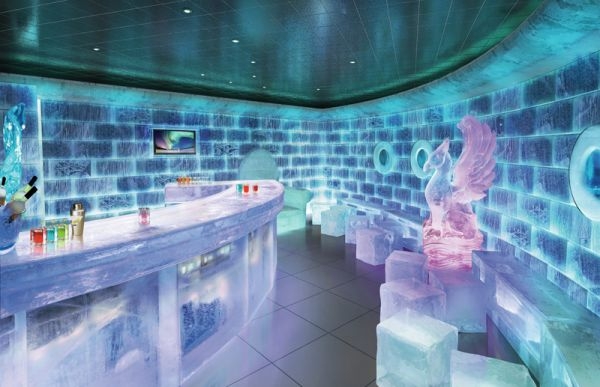 The Epic has achieved a cruising first by introducing an on-board ice bar in partnership with SVEDKA Vodka so that guests can enjoy drinks in -8 degrees Celsius after a hot day on the deck.

The bar will be formally unveiled, along with the rest of the onboard attractions, at an inauguration ceremony in New York on July 2.

The bar is created totally from ice, with ice tables, stools, glasses and walls which are lit by LED technology to simulate the arctic atmosphere of the northern lights.

It will serve cocktails made out of SVEDKA vodka and Inniskillin ice wine to guests, who will have to pay $20 for the privilege (which includes two signature cocktails).

Guests are given hooded coats and gloves, as the room is maintained well below zero to stop its ice sculptures — and fixtures — from melting.

Ice bars have become the new “must-have” for trendy cities since Absolut opened the world’s first in the Icehotel Jukkasjarvi in Sweden back in 1994.

In 2002, the world’s first permanent ice bar opened in Stockholm, followed quickly by outposts in London, Oslo, Copenhagen, Tokyo and the Icebar Orlando, which marked the concept’s first move to the US in 2008.

Despite Britain experiencing its coldest winter for nearly 30 years during 2009-2010, the London Icebar reported a record period in January, a sign that ice bars retain a year-round appeal outside of their Scandinavian home.

Although as the Norwegian Epic is scheduled to sail the Caribbean and Mediterranean until 2012, it’s probably not an issue.