This 11 pound, 70-year old lobster is currently available for purchase at New York’s Oceana restaurant for $275. Oceana purchased the 11-pound crustacean earlier this week after customers complained that the restaurant’s lobsters weren’t big enough. (Because lobsters’ age can be determined by weight, the Oceana owners believe the 11 pound crustacean, nicknamed “Peter,” is […] 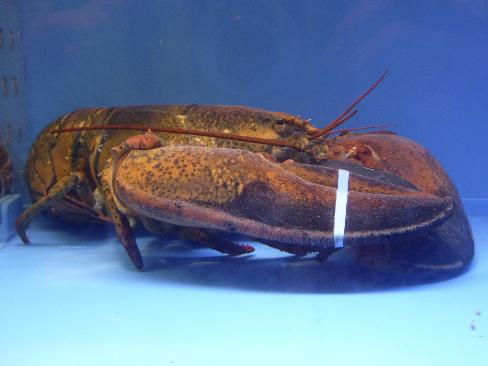 This 11 pound, 70-year old lobster is currently available for purchase at New York’s Oceana restaurant for $275.

(Because lobsters’ age can be determined by weight, the Oceana owners believe the 11 pound crustacean, nicknamed “Peter,” is approximately 70 years old).

The eatery’s executive chef, Ben Pollinger, planned to cook Peter, as long as a patron was willing to pony up $275 to feast on the giant lobster.

But once patrons found out about Pollinger’s planned dinner, the restaurant was flooded with calls.

Concerned customers felt for 70-year-old Peter, and believed that his weight and his senior citizen status should save him from winding up on someone’s dinner plate.

But Ben Pollinger, a little frustrated, told the Daily News, “People have had emotional reactions. What’s the big deal, why are we being persecuted for this lobster?”

A number of customers also asked how a creature probably born before World War II would taste.

A-list chef Michael White told Bloomberg News, “I can only imagine that it tastes like (expletive) because itâ€™s so old and tough. It depends on how you cook it, but itâ€™s like eating a 70-year-old cockroach.”

Luckily, the restaurant listened. Oceana says it will take Peter off the menu, though it is unclear what exactly will happen to the old lobster.