A gold-coated Kit Kat bar will hit stores in Japan late November, but at an eye-watering US$16 a finger (limited to 500 pieces) it will only be available for the lucky few. 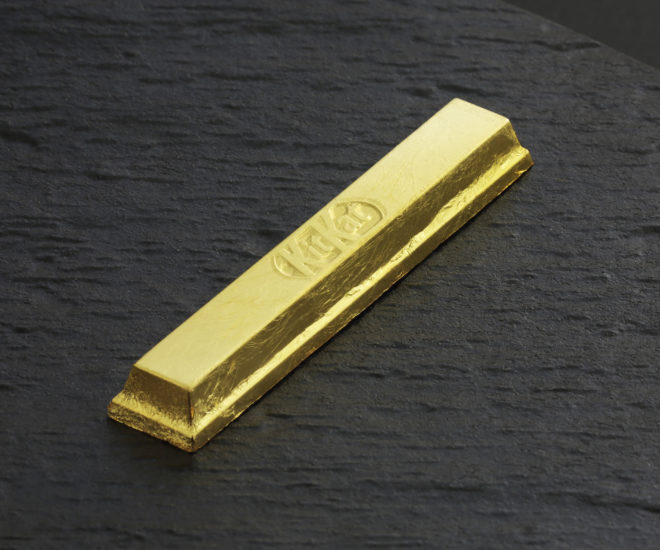 For chocolate lovers with cash to burn and dreams of Willy Wonka, a gold-coated Kit Kat bar will hit stores in Japan late November, but at an eye-watering 2,016 yen (US$16) a finger it will only be available for the lucky few.

Unlike in the famous children’s book Charlie and the Chocolate Factory, the luxury chocolate bar won’t be randomly scattered among regular Kit Kats in shops.

Instead, 500 of the single bars will be made and sold only in the country, according to Nestle Japan, which has produced over 200 flavors — from strawberry to green tea and even wasabi — since introducing the chocolate treat there in 1973.

“In Japanese convenience stores, consumers are used to having new varieties all the time,” Nestle Japan spokeswoman Melanie Kohli told AFP on Thursday. “Japan is a very unique market.”

Nestle’s limited edition “Sublime Gold” one-finger treat, which is covered in gold leaf and described as having a rich, bitter chocolate taste, will go on sale at chocolate boutiques in eight swank department stores from Tokyo to Sapporo in the north and Fukuoka in southern Japan.

“We have made it a luxury product,” Kohli said of the gold bars, which could be a popular treat during the holiday season. “Not like you probably remember from your childhood. It’s a special occasion, to celebrate the end of the year.”

Kohli added that Japan’s “omiyage” culture of bringing regional gifts back for family and work colleagues after trips away was another reason for Kit Kat’s success with its various flavors.

“Like you have wasabi from Shizuoka and strawberries in Kyushu,” she said.

“Japan is the only place where you can have such a variety of Kit Kat flavors, something linked to that regional culture.”

Wasabi, related to horseradish, is a notoriously hot Japanese condiment served with sushi and sashimi.