China’s ever-growing taste for luxury goods is extending into the culinary world — and that’s good news for Jean-Marie Vallier, who runs a duck farm and foie gras factory outside Beijing. Two years ago, French group Euralis — the world leader in foie gras production — invested 2.7 million dollars in the facilities, aimed at […] 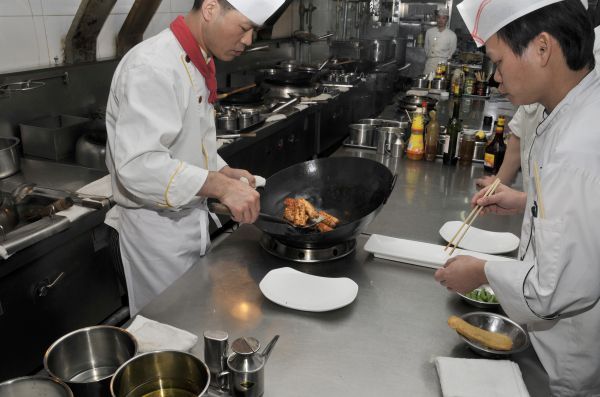 China’s ever-growing taste for luxury goods is extending into the culinary world — and that’s good news for Jean-Marie Vallier, who runs a duck farm and foie gras factory outside Beijing.

Two years ago, French group Euralis — the world leader in foie gras production — invested 2.7 million dollars in the facilities, aimed at producing the delicacy for high-end restaurants under the Rougie brand.

As the tastes and budgets of China’s growing middle class expand, so does the demand for upmarket Western fare served in chic venues, and Vallier is well-placed to profit from the fledgling gourmet revolution. “The Chinese have more and more money, and they are looking for quality, and are willing to pay for it,” Vallier said.

“Our goal is to produce the same high-quality foie gras, whether in Canada, France or China,” explained the 32-year-old Frenchman, who has lived in the country for seven years.

As Beijing bans the importation of raw food products, any foie gras consumed in the country must be produced here, explains Vallier, who says his main clients are top chefs working in five-star hotels and gourmet restaurants.

“The demand exists, and so this is why Euralis decided to set up shop in China,” he said.

The farm, a Sino-French joint venture, raises just 120,000 ducks a year for now, but — in a sign that expectations are high — has the capacity for annual production of one million.

According to Vallier, the number of wealthy consumers in China increases by 60 million each year, or roughly the equivalent of the entire population of France — a gold mine for companies like Euralis.

China’s total annual foie gras production of about 1,000 tonnes is still far off that seen in France, the world leader at 20,000 tonnes.

But output is increasing at about 30 percent a year, and Vallier’s competitors are mostly Chinese — meaning their products do not have the same cachet for brand-conscious consumers who associate France with luxury goods.

Foie gras — French for fatty liver — is commonly produced by the controversial force-feeding of ducks and geese so that their livers become engorged and expand up to 10 times the normal size.

Li Dezhong, a chef at Beijing’s upmarket Dazhaimen restaurant, is using duck and goose foie gras to give a French flair to traditional Chinese dumplings or to spice up white mushrooms often used in Asian cuisine.

“Foie gras dishes have been a great success. Out of every 10 tables, six or seven will order it,” he said.

Those dishes can cost more than 100 yuan (15 dollars) — a relatively high sum for much of the population.

“With the standard of living on the rise, the demand for quality is higher and higher — not only for clothing and housing but also for food and fine dining,” said Li Min, the manager of Dazhaimen.

Vallier says the Lunar New Year now under way — the most important family holiday of the year in China, when people travel across the country to see loved ones and host lavish feasts — is a “rush” period for him.

The fine dining trend — already well-established in Shanghai — is just taking off in Beijing, and is backed in part by a government looking to boost consumption as a way to keep the world’s number three economy in high gear.

No official figures are available on high-end dining receipts.

The commerce ministry says it hopes to develop a few dozen major name brands in the restaurant sector, which employs 20 million people but is still dominated by small and medium-sized businesses.

“By 2013, the restaurant industry will see an annual growth rate of about 18 percent, posting sales of 3.3 trillion yuan,” the ministry said early last year in its guidelines for the sector.

The government hopes to foster the creation of about 100 restaurant groups in the coming years, with each capable of generating more than one billion yuan in annual sales by 2013.