Are we looking at the mirror of the future?

The iMirror looks like a normal full-length mirror, but behind the reflective panel is a touchscreen computer with voice commands and even facial recognition technology. 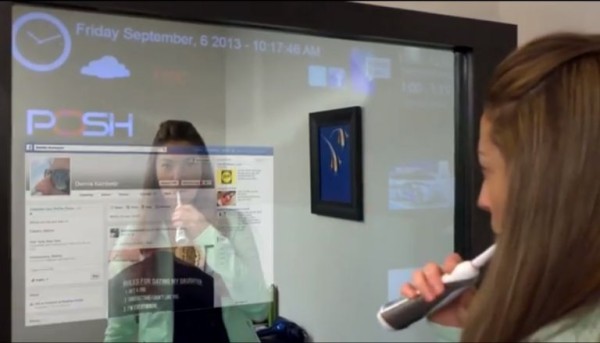 The iMirror looks like a normal full-length mirror, but behind the reflective panel is a touchscreen computer with voice commands and even facial recognition technology.

Its makers, Posh View, claim that the average adult spends over 168 hours a year in front of the mirror and that much of that time could be much more entertaining and productive. How about catching up on the latest cat videos while brushing your teeth or literally following a how-to guide when applying new makeup shades for the first time or attempting to tie a bow tie or Windsor knot?

Best thought of as an absolutely huge tablet, capable of running ‘full-length’ apps, the iMirror connects to a home’s wi-fi network and has a built-in camera which it uses to recognize who is staring into it.

Facial recognition means that it’s able of pre-loading favored apps or other settings based on the family member’s preferences — whether it’s CNN and the weather forecast, the inbox or, in the case of children, nothing other than their reflection, after all they spend far too much time in front of screens watching TV programs or playing video games.

As well as being equipped for multiple accounts, the iMirror is touch-sensitive meaning it can be navigated just like a tablet or smartphone but it also responds to voice commands, which is useful seeing as people are usually brushing their hair, shaving, dressing or brushing their teeth when using a mirror, meaning their hands are otherwise engaged.

The iMirror is still in its prototype stage (at the moment, each iMirror is built by hand in a workshop in Canada to customer specification), and in an attempt to bring the product to a mass market and streamline production before next summer, Posh View has launched a Kickstarter campaign in order to raise $200,000, which, if successful will price the iMirror at $2,750.

However, even if the crowdfunding campaign fails to hit the target, Posh View still aims to bring iMirror to market in a number of sizes, but it will take just that little bit longer.