Inspired by heritage aviation and modern watchmaking techniques, a team of watch designers led by Bruno Belamich (the ‘Bel’ in Bell & Ross) set out to create timepieces perfectly suited for professional use. In the beginning, a team of watch designers led by Bruno Belamich (the ‘Bel’ in Bell & Ross) and aeronautical control panel specialists joined forces with one project in mind: to create timepieces perfectly suited for professional use. Their goal: to be part of the great Swiss watchmaking tradition while meeting the demands of men facing extreme situations.

Some professions require absolute precision. When success depends on perfect timing and every second counts, having a watch able to meet the most rigorous of standards becomes absolutely imperative. Reliability, performance and resilience are essential for these special timekeeping instruments.With their shared values of performance and excellence, Bell & Ross works alongside some of the elite units of the Armed Forces around the world to design timekeeping instruments with specific functions or to celebrate particular events. Today, astronauts, fighter pilots, armed police and special law enforcement, submariners and even bomb disposal divers use Bell & Ross watches as a tool when completing their missions. 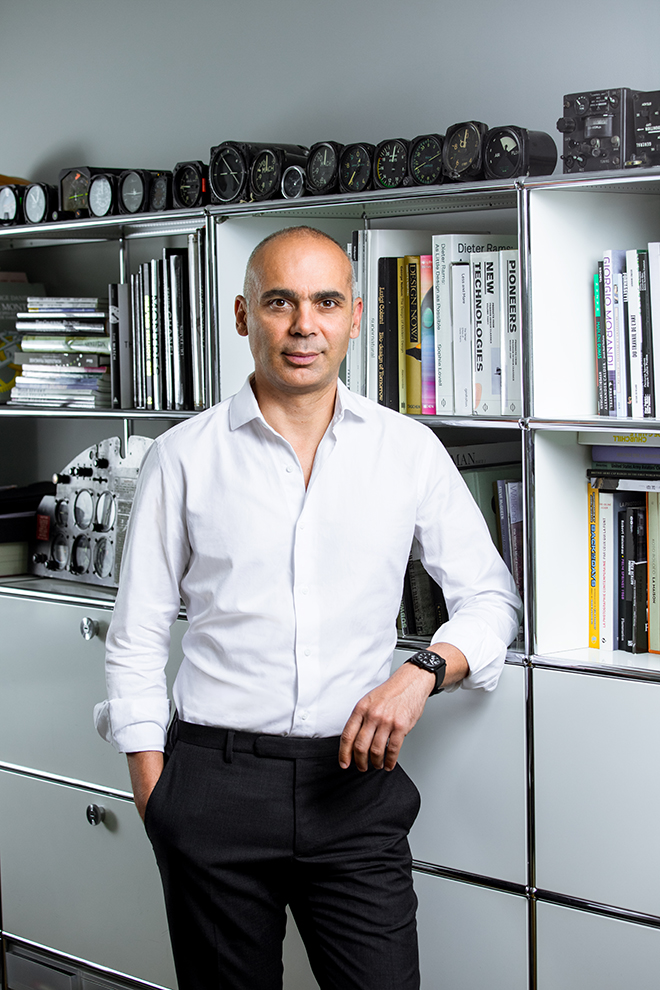 Mr. Belamich, you spent a stint in the military, could you tell us more about that?

Yes, I have done my military service on the other side of the world, in New Caledonia, for two years. Taking a break from my studies, it opened up my curious spirit and thirst for learning. It also made me want to explore new lands and territories like Asia. This is where I discovered Hong Kong, the watchmaking mecca, where I then settled down and worked in a design agency for six months.

During your time in service, what sort of perspectives in terms of functionality and practical aesthetics did it give you?

I loved the rational world of the army that values utility and functions. It comforted me in the idea that an item – whether it is a garment or a tool – needs to be comfortable, useful and practical.  I want to feel at ease wearing them, without too many constraints. What was your biggest influence in terms of design?

The heritage of the Bauhaus school, a pioneering artistic movement, which laid the foundations of modern architecture, strongly influences the culture and work

I admire Dieter Rams a German designer that developed designs for the brand Braun in the 1960’s. And I’m passionate about industrial design: Jasper Morrison is the designer that I wish I would be as he does what I dream to do. Very clear, clean design that appeal to my senses. Mies van de Rohe and his Farnsworth house architecture. It is for me the emblematic modern architecture and the example of the minimalist approach where “less is more”.

In the watchmaking landscape, I admire Urwerk, for his absolutely insane watches and Jacquet-Droz, which is a must in my eyes because of extreme simplicity. Military standards appeal to the fantasy expectations of many watch lovers, could you give us an example of when it mattered in a civilian environment?

Of course, and the first thing that pops out of my mind would be a breakthrough invented by the WWI French soldiers and that inspired us: ‘From the Pocket to the Wrist’. I’m referring to the first wrist watches, coming directly from the Pocket watches, used by the military in the 20s, and more precisely by pilots who were one of the first to use the wrist watches as an instrument when they were out in a mission.

For the story, these soldiers took Pocket watches of the time and they attached sort of handles on the 12 and 6 o’clock level in which they inserted a small belt, or they fixed the Pocket watch on a support then tied to the wrist. This transformation of the Pocket watch allowed the pilot to read the time in a more quick and practical way, and it was protected from shocks. It was at this point that wrist watches became more popular, a masculine object, and not just a precious object for the ladies of the Court. While aeronautical influence was readily apparent by the time the aviation collection entered popular zeitgeist, what were the considerations in exploring historical eras of aviation history when conceptualising of the Vintage collection?

Our designs have always been influenced by the reinterpretation of military watch design history. We are delving into the past even more to round out our collection. The challenge lies in remaining faithful to present day watch-making standards while adapting them to Bell & Ross design principles. Paying tribute to the military, and particularly to the aviators who were the first professionals to consider the wristwatch an asset on their missions, the Vintage collections evoke the evolution of the watch in civil and military aviation. With a modern design, it represents utility in its simplest form and conjures the essence of the original models.

It is the intermediary evolution between the pocket watch and the wristwatch of the 1940s. We have paid homage to the early days of aviation with the PW1 and to the 1st wristwatches – the WW1 – worn by pilots in the 1920s, born out of necessity to free the use of their hands. Our 3rd Generation of Vintage – pure essence of the pilot’s watch – are re-editions of watches worn by aviators in the 1940’s. In the 21st century it will be worn by all those who desire a timepiece inspired by military watch history. There’s a rich history in watchmaking and given B&R’s relative youth (1994), there were some critics who felt that you were appropriating or attempting to project a heritage of producing military aeronautical watches were no previous history existed (at least not in the Longines-Majetek way, etc), was this a misunderstanding? Or simply because provenance ways so heavily in the industry that any newcomer is subjected to intense criticism till a certain period?

Yes, it must be a misunderstanding. At any moment, we have pretended such thing and never hidden our relative youth! Bell & Ross draws its inspiration from the history of aviation and the military specifications that accompany it, each time carrying out a technical or visual feat to produce an instrument of the highest quality. It combines the authenticity of vintage watches with the legibility of cockpit instrument panels, all in a single watch. We are passionate about our mission to revive the spirit of the early watches which influenced history and pay a heart-felt tribute to the past through our creations.

What do you see in Land Rover which you feel makes it an allegory for B&R?

From my point of view, Land Rover is to automobiles what Bell & Ross is to watchmaking: functional, off-road, ergonomic, resistant. As tough as a 4×4, but as light as a drone, a guarantee of ultimate performance. Bell & Ross Vintage chronographs paying tribute to the air forces that fought in the Second World War were released. The dials of these pilots’ watches feature a colored insignia, like those painted on the wings of the French, British and American fighter planes of the era.

Modern aeronautical tech is increasingly digital and fly-by-wire, where do you see B&R headed?

Our dashboard inspiration doesn’t come from the modern ones but from the 60’s-70’s. And it is one of our influence amongst others. More globally, the fine Swiss watches market is about innovation, passion, exclusivity, eternity while the connected watches world is more about innovation, technology and is temporary.  Mechanical watches are part of the concept of longevity, gain in value over time, pass down to the next generation and still have a bright future ahead of them. Beyond the financial aspect, it is much more a philosophical ground for thought to me, between the digital world and the craftsmanship sphere.

We must consider the connected watch as a complementary product to the traditional timepieces. There is room for two after all ! 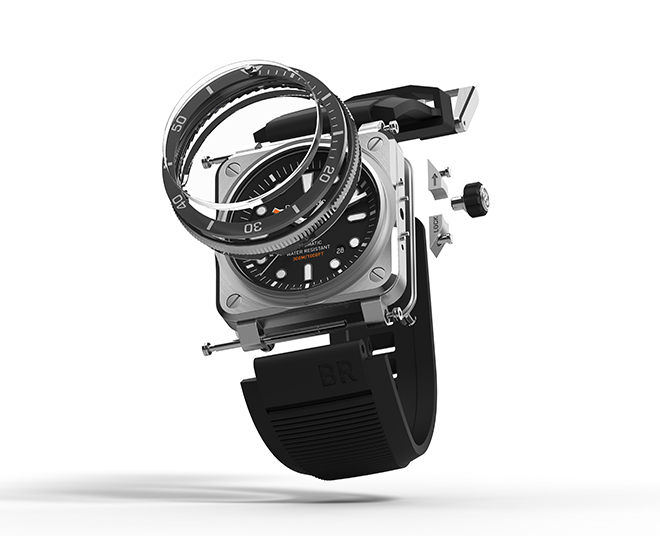 Given that diver’s watches were made round due to functionality and ease of water-proofing a watch with round gaskets, how much of a challenge was it in terms of engineering and brand DNA to eventually have a Diver’s watch in the brand’s most iconic shape (the square)?

Indeed, it is true that it was a challenge! However, we were able to create and insert round gasket housings inside the case to overcome the square shape issue.

And in this matter, which was more important, form following function or function following form?

Form follows function of course! Each detail has a purpose and a function. Our timepieces perfectly illustrate this motto which the founding axiom of design theory. The design is intended primarily to serve the function and aesthetics is a result of this approach.

When drawing a watch, I think about the functions needed by men in extreme situations or professions… A good watch always starts with a precise function.  It needs to answer to a specific professional need.

Finally, what would you say to watch snobs/purists?

Bell & Ross has embarked on a new watchmaking adventure that places a focus on creativity, superior performance and therefore, the art of seduction.

In recent years, we have developed and created very exclusive high-end Sapphire pieces that take the challenge of transparency to the extreme, offering the unique experience of wearing a watch movement on one’s wrist.

We are constantly growing and evolving, we’re bound to renew ourselves each year and this is a very inspiring exercise for us.