A focus on the key looks from Louis Vuitton’s Prefall campaign collection 2018 and introducing Emma Stone as the brand’s new muse. In the latest advertising campaign, Louis Vuitton goes public with its new “Spirit of Travel” starring Emma stone, which the campaign is a first for the Hollywood star. Despite having teamed up with the French fashion house back in October and opting to wear the label for various red carpet occasions, such as the recent Golden Globes and the Oscars, Emma Stone had not yet been spotted in any ads. Louis Vuitton Prefall collection showcases Emma Stone as heroine figure – one who exudes a daring, confident and yet always on the move character.

Now that the actress has been chosen as the “face” to front the French luxury campaign, the team took the photo shoot to the Californian desert, with the Louis Vuitton Prefall 2018 playing on the brand’s French heritage.

Shot by Craig, the Travel campaign highlights the Capucines bags: a signature of discreet elegance and Capucines represents the spirit of the House and its expertise in leather craftwork. 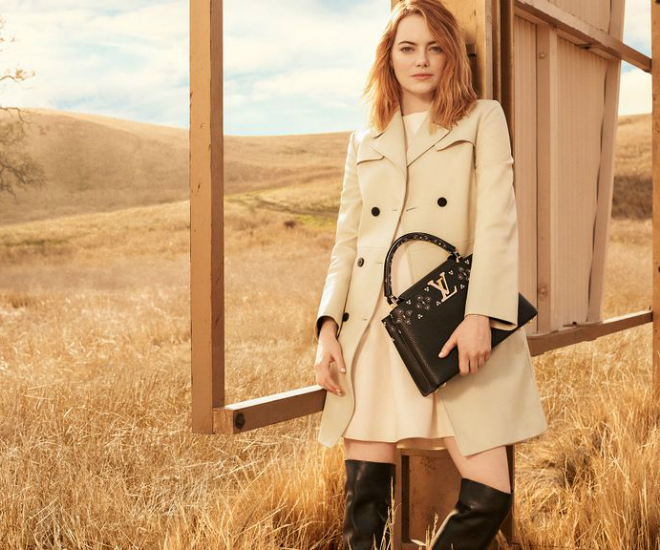 This is what the lovely actress has to say as quoted by the fashion label: “I am very happy and proud to be working with a House as passionate as Louis Vuitton, as well as with the unique style and creations of creative director, Nicolas Ghesquière.”

The previous and existing Louis Vuitton muses include Alicia Vikander, Selena Gomez and Jaden Smith, among others.