Pushing the boundaries of normalcy, Aiman’s works are portals into wondrous and outlandish worlds. His audiences are absorbed into unconventional paintings that subvert quotidian narratives and are weaved from fairy-tales coated with darker underpinnings. ‘The Evolution of Eian & Eien’, Aiman’s solo exhibition at Art Porters Gallery, is created around those same imaginary themes – with a curious twist. Running from 16 May to 15 August 2018, it introduces the element of science fiction into high fantasy and muddies their distinction into one melting pot of stunning colours, mythical imagery, iconography and eroticism. Aiman, ‘Don’t just wake me up when its Spring, for I want to watch the leaves fall, and experience the snow melting away, before watching the flowers bloom again.’, 2018, oil on canvas,150 x 150cm.

The up-and-coming Singaporean artist is not an unknown figure in the local art scene. In fact, this show marks his second solo exhibition. Guillaume Levy-Lambert, artologist at Art Porters Gallery explains what fascinates him about Aiman and his work. “I’ve known Aiman for a long time,” says Levy-Lambert. “Ten years ago, I commissioned him to create a piece for The MaGMA Collection. Since then I’ve had the privilege to watch him grow and mature as an artist. So when he approached us last year to show his work, we were very touched and delighted with the reactions. On two occasions we did not have a chance to share on social media that we had a new work  — we just hung it in the gallery and within two days it was sold.”

ART REPUBLIK speaks with Aiman to find out more about his creative processes, what inspires him, and his plans for the year ahead. Your works often venture into fantastical realms, entering make-believe worlds filled with mixed elements of mythology, religion, and stories. What is it about the quixotic that fascinates you?

I’ve always had a fascination with the romanticism and grandeur of Greek mythology; the immortality of the gods, the infinite depths of their loves (and lusts) and the ethereal nature of nymphs. I also love how religion has the ability to bring balance to the “chaos”.

What interests me the most is how these stories and parables transcend time; it almost feels like we are a society of different actors playing out the same roles; tales of desire, power, and lust.  As creatures of creation and discovery, we often feel as though we are experiencing things for the very first time, yet there is very little that is unique or truly discovered from scratch.

The works in this exhibition explore this fascination of mine, and through historical references  such as European and Asian mythologies as well as folklore interspersed within a timeless plane, it allows us to question whether the issues we face are unique to our times.

What were some of the motivations you had for approaching this exhibition on ‘The Evolution of Eian & Eien’?

The concept for ‘Eian & Eien’ came to me in a vivid dream. I remember waking up, a bundle of emotions running through me. It was a sensory overload, and like most dreams it left me slightly dazed and overwhelmed, intrigued and filled with inspiration. It was these feelings that encouraged me to meditate, recollect, research and delve deeper. Each time as the concept matures, it adds depth layer-by-layer to the evolution of ‘Eian & Eien’.

This is the second time I’ve followed this creative process. The first was for the series ‘A little late for the tea party but the earth laughs anyways’.

As for the title, upon researching I discovered that “Eien” is a Japanese word representing eternity, more commonly associated with femininity. “Eian” is also a boy’s name in Hebrew which carries the meaning of “God is gracious”. Together, they tie in with the poetic form of balanced-duality of male-female, eastern-western juxtapositions interposed with the notion of a greater purpose in these times of instant gratification, that provoked and inspired me to create to these series of works. 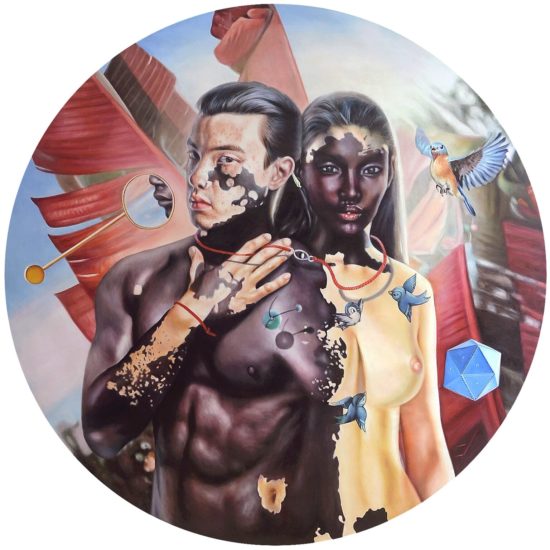 Aiman, ‘When you don’t trust your own reflection, don’t blindly follow the sound of the Mountain Blue Bird’, 2018, oil on canvas, 150cm (diameter)

In this exhibition, you explore parallel worlds of technological advancement and the evolution of humankind. Tell us more about what it is you wish to convey to your audiences with these themes of progress.

Since the earliest of times, humans have needed to be sensitive to their surroundings to survive. We have an innate awareness of our environment and tend to seek out environments with certain qualities like safety, security, and comfort.

I’d like the audience to realise how much more of an active role they are playing in shaping the way our environment changes, be it our ecological footprint or societal pressures of conformity. I also wish for my works to be that catalyst that takes us from awareness to change.

Evolution also has a way of adapting the human form based on its ability to survive the rapidly changing environmental factors. In my series of artworks, I created these hybrids of interracial or intersex conjoined twins as a representation of a coexisting society. This presents the audience with an alternate reality, to challenge their notions of identity, tolerance, and acceptance. Aiman in the studio.

As an artist, you are known for blurring the boundaries between fine art and popular art forms. What is your creation process like, and how do you think that has influenced the way audiences respond to your works?

I’ve always had a sense that I’m constantly floating between art forms since my ideas and visual inspirations are usually derived from the process of meditation and reflection. They are then planned, conceptualised and developed using a digital medium, before being physically painted in oils onto a canvas, thus transforming an initial spark of inspiration from a digital creation into a physical artwork.

The paintings act as a summary of an otherwise extended and rigorous process of thought, contemplation, and creation, allowing the audience to participate in a more in-depth discussion of the idea in its maturity. I’d like to think of it as a visual essence encapsulating the whole process of creation, and one that continues to linger in your mind even after you’ve left the gallery.

The nature of this process of creation, along with the final painting that encompasses it also opens up my work to a greater audience, and allows people to appreciate both the aesthetics of traditional art, as well as the concepts and processes that are more familiar to contemporary art.

This exhibition marks your second solo exhibition with Art Porters Gallery. What’s in the pipeline for you for the rest of 2018 and beyond?

I currently have a number of commissions in the pipeline and will shortly be preparing for a show in Art Stage Jakarta thanks to Art Porters Gallery. Also, I’m in discussions with an established L.A. artist for a collaboration in the United States. I’m just really looking forward to diving into the creative process: going to the studio in the morning and staying there until late evening, and I will be right back there the very next day again, inspiration and all.  I love art, and I love how it can change your life.

In addition to ‘Eian and Eien’, catch Art Porters at Art Central in Hong Kong from 26 March to 1 April 2018 at booth C11 with a solo presentation of Mulyana’s ‘Coral Atlas’.