Singapore is one of the culinary capitals of Asia and the world. The World Gourmet Summit has been making that point for the last 20 years. 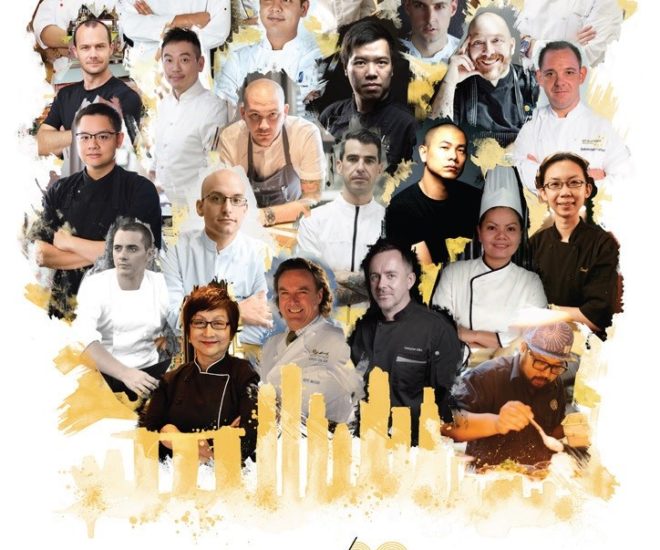 Singapore is one of the culinary capitals of Asia and, some say, the world; for the last 20 years, the World Gourmet Summit (fondly known as WGS) in the city-state has been making that point as succulently as possible. This year, we are looking forward to celebrating a milestone for WGS and Singapore, which finally gets its own Michelin Guide. But we are getting ahead of ourselves and a tiny helping of backstory is required.

Singapore has been a pioneer in spotlighting the work of chefs with live shows or pop-up dinners for years. With this anniversary edition of WGS, the event wants to shed a new light on culinary creation, as indeed it has throughout its existence. Over the years, WGS has never forgotten the importance of wine and 2016 is no different. Well, something a little different is the “jam” session between 20 chefs, both local and international taking place over two days at 1-Altitude. We know what you are thinking: why does it take 20 chefs to make jam… The press release describes the event as a “symposium” but we imagine it as an open kitchen where the chefs just grab ingredients and inspire each other with crazy ideas. Maybe it is just a food fight… This is just one event though.

From March 28 to April 24, these 20 chefs will settle in the kitchens of some of Singapore’s top culinary addresses, from the Mandarin Oriental to Odette’s kitchens. Spanish chef Javier Aranda of La Cabra in Madrid will represent his country’s new culinary techniques, while French chef Arnaud Bignon, who holds two Michelin stars for The Greenhouse in London, will also be in the city-state to showcase European savoir-faire. Japanese masters will also take part in the action: Yoshinori Ishii, whose double Michelin star restaurant Umu shines in London, as well as Takagi Kazuo, the revered Kyoto chef.

Some of the key dinners, concocted by one or several chefs working hand-in-hand with their respective brigades, and the masterclasses can be booked via www.worldgourmetsummit.com. About that Michelin Guide…

While being a culinary capital in Asia, Singapore is yet to have its own Michelin edition but that situation is changing, as we reported on earlier. The wire services and our own sources confirm that the bustling city is currently crawling with anonymous Michelin inspectors, who are not just on the way to Japan and Hong Kong. They will eventually be telling us which restaurants will feature in the local guide to be released in the second half of this year.

Now, everybody and his grandmother already expects that the new edition will include André Chiang’s André restaurant. Trained in France, this Taiwanese chef is considered one of the best chefs in the world, particularly for his André restaurant in Singapore. As for what else makes the grade, we think Julien Royer’s aforementioned Odette is a strong candidate as is the veritable institution known as Les Amis.

Michelin continues to weave its gastronomic web throughout Asia. The Seoul, South Korea debut edition is to be released next November. The red guide is already available for Hong Kong and Macao, while its Japanese edition boasts the greatest number of starred restaurants on the continent.

The Michelin guide has yet to take on Thailand or Vietnam, where culinary stars such as the Australian David Thompson (Nahm, Bangkok) and French restauranteur Didier Corlou (La Verticale, Hanoi) preside over the local scene.

This story was written in-house, with additional information from an AFP report.