The Rome-based luxury label is celebrating its latest flagship store with a new exhibition on the link between fashion and film. 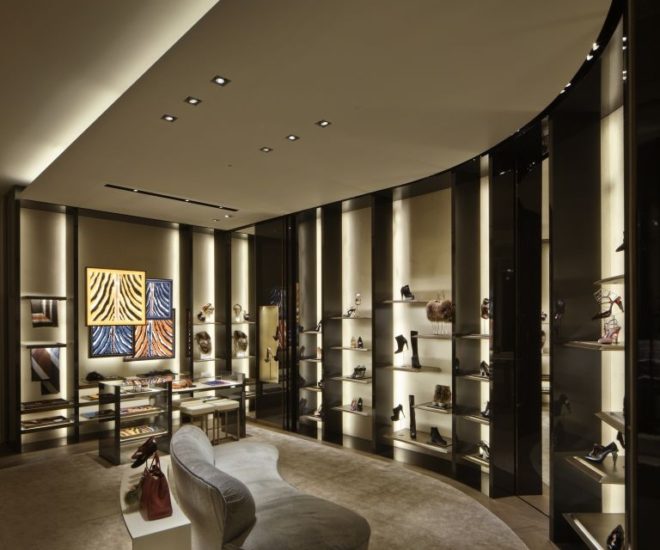 The Rome-based luxury label is celebrating its latest flagship store with a new exhibition on the link between fashion and film. Located on the famous Via Montenapoleone (Milan’s preeminent luxury shopping street), Fendi didn’t skimp on the glamour in refitting its latest flagship in the 16th-century Casa Carcassola-Grandi which opened September 19.

Set over two floors, the 5,400 square foot space is decked out in travertine, leather, bronze and stone with a feature wall covered in 40,000 bronze spikes to show off the brand’s ‘Baguette’ bags, and metallic and black Japanese lacquered walls for the fur room.

In celebration, the brand has also created an exhibition in the city’s formerly abandoned Manzoni cinema. “Making Dreams: Fendi and the Cinema” explores the relationship between Fendi and film, with key pieces on display from movies including Oscar and Golden Globe-winning 1996 hit “Evita”, and Wes Anderson’s 2001 indie classic “The Royal Tenenbaums.” Curated by opera director and designer Patrick Kinmonth and Antonio Monfreda, the exhibition will run from September 21 until October 6.

Fendi is hitting social media in a big way, posting a flurry of fabulous Instagram images after joining the image sharing site on September 16, launching an interactive Social Wall, and debuting a short feature titled “Amphitheatre” on website Nowness exploring the cinematic heritage of the brand.