Inside the Chanel Couture casino 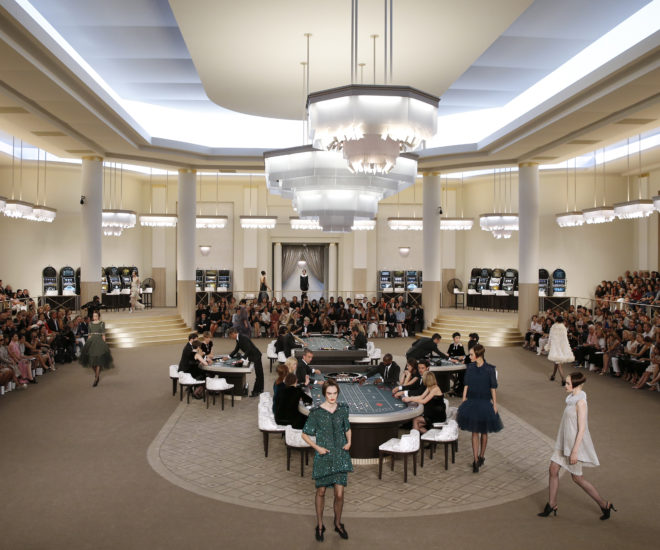 The fashion magnate transformed the Grand Palais into an opulent casino for the event, with stars including Kristen Stewart, Julianne Moore and G-Dragon crowding around the blackjack tables to check out the show.

And they were treated to quite a spectacle — Lagerfeld dressed his models up as Twenties starlets, with short and severe flapper girl hair and theatrical makeup in the form of bold, straight brows and deep red lips. The boxy aesthetic also ran through the collection — particularly regarding the indispensable two-piece suits, which featured straight lines and top-heavy forms. Shoulders were emphasized with bulky jackets while collars were kept wide or high and military.

Utilitarianism was also evident in the outsized woollen jackets with deep pockets and large, contrasting lapels, while skirts were generally worn narrow and to the knee in a conservative fashion.

There was of course quilting (or faux quilting), and lots of it, with the French house’s signature look being given a freshening up through the use of iridescent, metallic and semi-transparent mesh fabrics. Leather collars and shiny trims added pizzazz to the classic Chanel statement. “The idea was to take the most iconic jacket from the 20th century and create a 21st century version, which technically wasn’t even imaginable at the time it came about,” the designer explained.

Empire waistlines, beading and tulle ruffling gave a lightness of touch to the collection’s dresses, although the shapes were definitively structured. Sequins, feathers, pearls and semi-sheer overlays added drama to the look while retaining an understated sophistication. The highlight of the show came at the end, when Kendall Jenner stepped out in full “military bride” regalia in the form of a silk cream tailored trouser suit and veil. Lagerfeld also used the show to present jackets made entirely from a singular piece of fabric using a new 3D technique called ‘Selective Laser Sintering’ for the aforementioned ‘faux quilting’ effect, proving that though it might have looked like a collection inspired by the glamorous heyday of the bygone times, Chanel’s creative vision is rooted firmly in the future.