In honor of the opening of its Shanghai flagship store, Burberry staged an extravagant runway show to let the city know that it has arrived in China! 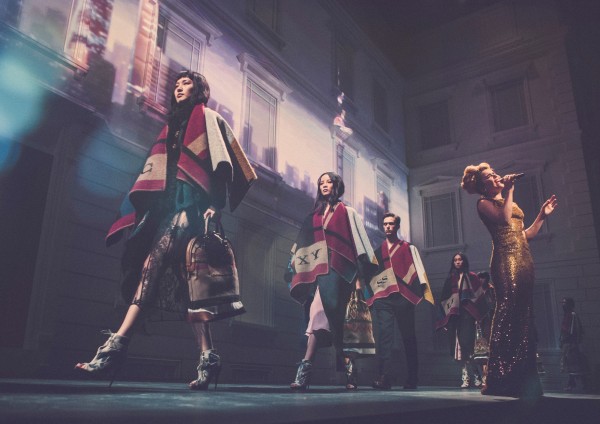 On Thursday night the British brand brought a bit of Blighty to Shanghai with the “Dreams of London” event.

In honor of the opening of its Shanghai flagship store, Burberry created an enormous custom-built set on the banks of the Huangpu River, featuring a mocked-up Georgian terrace and a cobbled street for the 1,500 guests. With the whole evening themed around the links between the two cities, it started with a short film exploring the history of the brand’s famed trench coat, followed by projected images that mixed the architecture of the two cosmopolitan centers, a giant choreographed dance spectacle, and musical performances from Paloma Faith, Ed Harcourt and George Ezra.

In fact, Harcourt’s “You Can’t Stop The Rain” was written and performed especially for the occasion. The musicians were accompanied by a fashion show featuring Burberry star Suki Waterhouse; the show was also an opportunity for the brand to show off the new Burberry Bloomsbury handpainted bags.

To cap it all off, Cara Delevingne flew above the audience on wires, like a Burberry-clad Mary Poppins. Model Shu Pei Qin, singer Angelababy and actress Carina Lau were just three of the Asian stars in attendance. And, in a fun digital tie-in, BURBERRY collaborated for the second time with mobile messaging platform WeChat.

The brand created a parallel event experience which allowed users to shake, swipe and tap their devices to interact with panoramas of the two cities. After the event they could then explore 360° views of the set.