These new photos of the bridge in China illustrate why this might just be the world’s most dizzying structure. 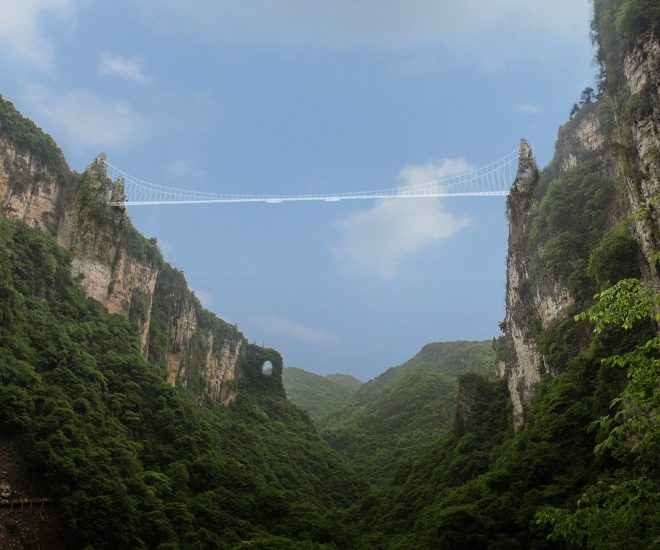 If you are afraid of heights, look away now because this story is all about the world’s tallest and longest glass-bottom bridge. New photos have emerged of what’s poised to become, arguably, the world’s most dizzying glass-bottomed bridge in China. Scroll to the bottom of the article for the video.

Located in the national park that inspired the floating mountains of James Cameron’s film Avatar, the Zhangjiajie Grand Canyon Glass Bridge is not for the faint of heart, connecting two precipices 300 meters above the canyon floor. The transparent bridge spans 430 meters in length, 6 meters in width and can accommodate up to 800 people. Designed by Tel Aviv-based architectural firm Haim Dotan Ltd., the feat of structural and architectural engineering holds 10 world records including the world’s highest bungee jump. The bridge is meant to be “as invisible as possible,” work seamlessly with nature and give visitors the sense of floating in mid-air.

Zhangjiajie National Park is located in the northern part of Hunan province. The bridge is expected to open this summer.

Though the Zhangjiajie Grand Canyon Glass Bridge will claim several bragging rights when it opens, the one title it won’t hold is being China’s first glass bridge. Last fall, a glass walkway opened in central Hunan province at a more modest height of 180 meters.