A renovation of a residence in Taipei’s fiery Beitou, makes clever use of space and sunlight to save the environment and connect residents with nature. 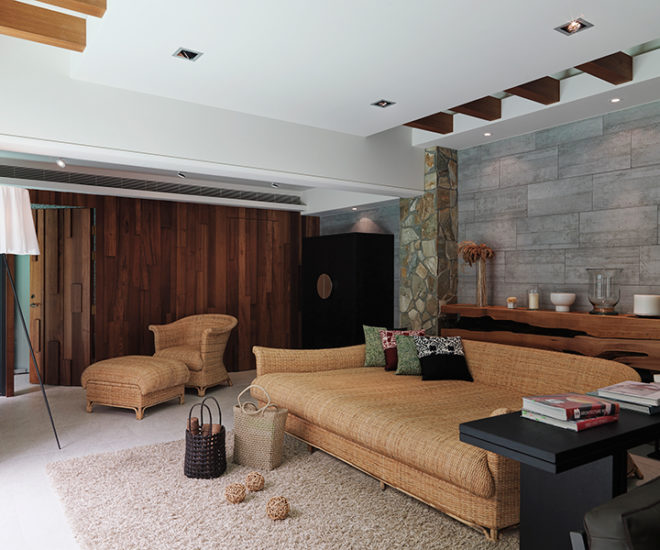 Beitou District is the northernmost of Taipei’s 12 city districts, and also its highest and most mountainous. Utilized by the Japanese for sulphur extraction and the health benefits of the hot spring waters during their rule of Taiwan at the turn of the 20th century, today the area is home to some of the most popular and luxurious spa resorts on the island.

The aptly named Catch Nature in a Frame, a residential project headed by Ryan Kuo, founder and art director of Taoyuan-based studio, Clearspace Design & Research, is nestled in one of Beitou’s many tree-filled valleys. The project is not Kuo’s first for this client: he has been working with the family—a married couple with two college aged children—for around five years, and in this time has designed a total of five residences for them. Catch Nature in a Frame is the second of such projects; the first residence, the family home proper, is located right next door, and three other apartment projects are in Taipei City. Alternative view of the first floor entrance, with a view to the extensive garden in the background. The garden is created and maintained by the owners.

Part retreat and part guesthouse, the owner, planning to attempt the renovation work himself, finished the demolition of the site’s original 30-year-old house in late 2012. With the first floor entirely demolished and only the basement level remaining, he quickly realised the immensity of the task ahead and decided to abandon his original plans, and recruit Kuo and Clearspace to the remodelling task.

Government restrictions on hillside construction work in Taipei meant Kuo had to stay within the footprint of the original building, and the finished residence, completed in mid-2013, remained a single-storied structure with a functional basement. At the request of the client, the downstairs natatorium was saved, only to be later remodelled into an open-air swimming pool. Nature is a recurring theme across all of the projects coming out of Clearspace Design & Research. “I try to bring the outside in, all those natural, simple materials like stone, like wood, like water,” explains Kuo. “I’m not interested in iconographic representations of these elements; I want to bring them into the space in a more conceptual way.” Given that gardening is a passion for the owners of Catch Nature in a Frame, and that easy access to a ground floor garden as well as a lot of sunshine and natural light featured in the client request list, the project presented Kuo with an unprecedented opportunity to focus on the urban outdoors. As he notes, “large gardens are a rare sight in Taipei.” The open plan design of the first floor allows the residents the a direct connection to the surrounding nature, as well as utilising natural light for lighting during the daytime. The teak furniture and screens are custom designed by Ryan Kuo and manufactured in collaboration with local Taiwanese craftsmen. To save money and to reuse existing resources, the designer used marble offcuts, a by-product of the local stone processing industry.

Sub-tropical Taiwan experiences temperatures in the high 30s in summer, and city residents often run their air-conditioners around the clock in the height of the season. To reduce the need for powered cooling, Kuo installed a slatted wooden awning above the first floor veranda. Working in conjunction with the shade created by the large trees that line the periphery of the property, the feature ensures direct sunlight (and the heat it generates) only affects the inside of the house for around 20 minutes each day. The large concertina doors that open onto the veranda, and a spacious lawn and sculpted garden mean that though direct sunlight is not a problem, natural light still penetrates, reducing the need for interior lighting during the day.

The slatted design is repeated in other parts of the house, such as in an exterior wall next to the front entrance, again letting dappled sunshine and natural light into the space without the heat. Above the veranda, the wooden slats are topped with glass, meaning the outdoor space can be enjoyed even during rainy days. On the flat rooftop, circular paving supports under stone tiles ensure easy drainage for water run-off and naturally regulate the temperature inside the residence, further reducing the need for air-conditioning. In adherence to the clients’ request, the rooftop also doubles as additional garden space, and today is adorned with plants. By keeping the pool at basement level, the water naturally stays cooler and evaporation is reduced, meaning the pool does not need to be refilled as often. The area of the pool open to the sky also reflects natural light into what would be an otherwise dark basement level, again reducing interior lighting requirements. Water reflects off the basement-level pool, flooding a once dark downstairs space with natural light. Left The far wall of the basement level, which backs onto the hillside, is finished with ceramic tile to protect from the soil behind it. The TV stand and back wall are custom designed by Ryan Kuo from teak.

Wherever possible, materials for the project were sourced locally. This includes the marble for the interior and exterior columns, and the pebble-inlaid concrete walls, which also feature both inside and out. The stone, known locally as yilan shi, was sourced from nearby Yilan, reducing both monetary and environmental transport costs. For the columns, Kuo chose to use marble offcuts, a by-product of the marble processing industry; where each block of stone is cut into uniform blocks, there are inevitably odd-shaped pieces left over. These natural materials are also porous, helping to control internal humidity that is an inevitable feature of the often overwhelmingly damp Taiwanese climate in a way that the more popular ceramic tiles cannot. The furniture, panelling, shelving, and cabinetry that feature throughout the house was designed by Kuo and custom-produced in partnership with local craftsmen using recycled teak, with the remaining furniture mostly sourced from B&B Italia. Touches of the old house remain: a wall light next to the mirror in the downstairs poolside bathroom was saved from demolition and re-installed. “It’s a good way to remind us of the former life of the house, the story behind the house,” Kuo says. “We’ll have a little bit more respect for the place because of it.” A sustainable mentality is even built into the design of fittings. For example, the first floor bathroom features a set of sinks and taps custom-designed by Kuo to constantly remind the user of water sources–one faucet plunges downward from the ceiling, representing water raining down from the sky, while another resembles a waterfall, with water cascading down its steps and into a lagoon-like handbasin. Despite its open appearance, the hot tub area is entirely private. Located in the basement underneath the first level garden, it is sheltered by the trees of the surrounding mountainside. The basement level at night.

Ryan Kuo is a latecomer to the architecture and interior design fields. He holds an undergraduate degree in graphic design, and worked in advertising for eight years before heading back to National Taipei University of Technology to study architecture and urban design at master’s level. Upon graduation, he founded Clearspace Design & Research, a practice he has headed for the past seven years. A delayed start, it seems, at least in Kuo’s case, is not always detrimental. In less than a decade, he has managed to amass a huge number of international awards for his design work, recognition from Germany’s iF, the A’ Design Award and Competition in Italy, Successful Design and the Jintang Prize in China, IDA’s International Design Awards, and Taiwan’s prestigious Golden Pin Design Award among them. “When it comes to incorporating sustainable design concepts into the renovation of a building, you need to consider not only the materials used, but also the surrounding environment,” notes Kuo. “I might focus on interior design and renovation, but many of my ideas come from sustainable architecture.” The basement level at night