David Beckham poses with his band of brothers in the latest campaign shot for Belstaff. 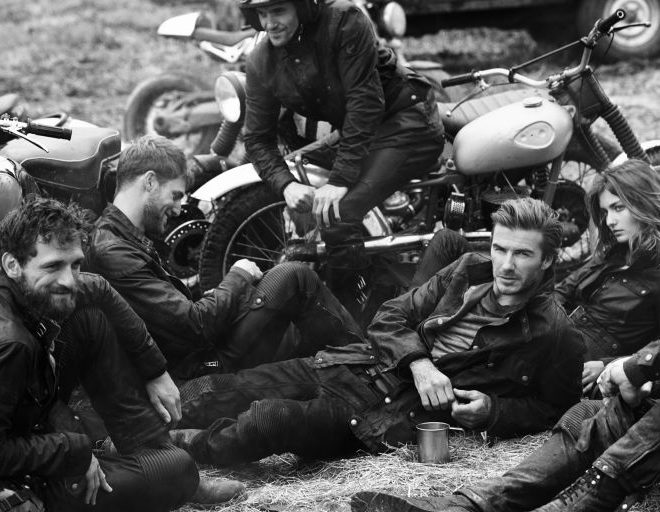 Belstaff has released a new biking video showing off its newest collections in a short film by Justin Stokes. A gang of guys head out on vintage rides, rolling at a leisurely pace through the countryside from the famed Goodwood estate in West Sussex to London’s New Bond Street.

Taking its cues from Hollywood classic “Easy Rider” and more recent retro-biker films from the likes of Parisians Blitz Motorcycles, the film also features the talents of a certain David Beckham, the face of the brand, who greets the lads as they roll into Mayfair. Inspired by the idea of “a band of brothers traveling across the English countryside” according to the brand, the image sees David relaxing with Romanian runway beauty Andreea Diaconu, alongside male models Tom Firth, Christian Gajdus and Will Bowden.

Dressed in Belstaff, the soccer star and his compadres lounge on the ground next to a selection of vintage motorcycles, the scene accessorized with a metal travel mug.

Beckham is notoriously fond of two-wheeled transportation (he first started biking during his years in Los Angeles with the MLS LA Galaxy Team), which chimes with the Belstaff brand’s own motobiking foundations. The Belstaff site currently has footage of the footballing icon riding his bike around a muddy English field — we can’t wait to see more visuals.