The 43rd American Music Awards in Los Angeles rolled out its red carpet for the biggest stars on the planet to stroll down in stunningly seductive dresses. 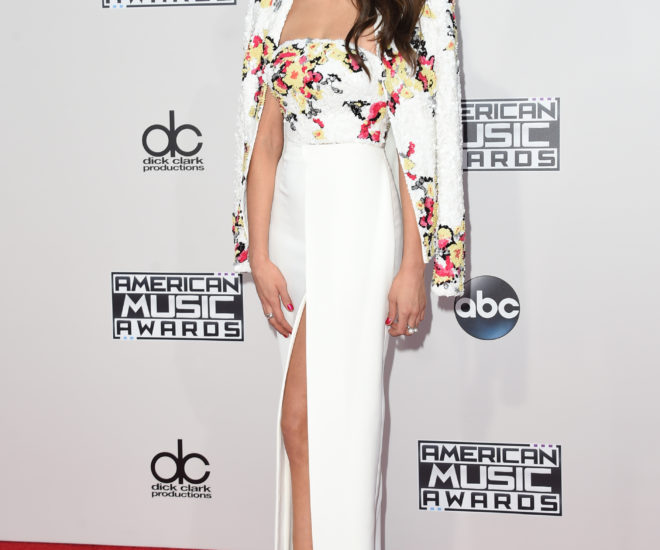 The 43rd American Music Awards, which took place November 22 in Los Angeles, rolled out its red carpet for the biggest stars on the planet to stroll down in stunningly seductive dresses. Let’s take a look at some of the most beautiful outfits of the evening, including those worn by Gwen Stefani, Kendall Jenner and Demi Lovato. We begin with Nina Dobrev, pictured above. The former star of the Vampire Diaries series opted for a magnificent Zuhair Murad dress with a sprinkling of flowers on the top and a thigh-high split in the skirt. The E! channel TV presenter sparkled on the red carpet in a dress by Gabriela Cadena, a glittery concoction with semi-transparent panels. The American singer, who is known for appearing on Dancing with the Stars, wore a Naeem Khan dress with an Indian-inspired pattern. The American singer was an image of youthful sweetness in a pink floral mini-dress by Emanuel Ungaro which showed off her long legs. The singer and stylist always tries to stand out at ceremonies of this kind, and this time she really made an impact with this semi-transparent half-mermaid half-bat Yousef Al-Jasmi dress. As sexy as ever, the top model was sporting a new haircut which caught everyone’s eye on the red carpet, as did her pristine white Bao Tranchi outfit with a split skirt and a pretty low-cut top. While both sisters opted for total black, they were not going for the same effect with their outfits. Kylie played the sexy card with cut-out pieces and leather in a Bryan Hearns dress, while Kendall aimed for simplicity and elegance in an Oriett Domenech number. But the top model’s fringe attracted the most attention. Demi Lovato wore a black and gold Lorena Sarbu dress with a beauty look that was full-on Hollywood glamour.