A print by one of the prominent artists of the ukiyo-e genre fetches a new record in Paris. 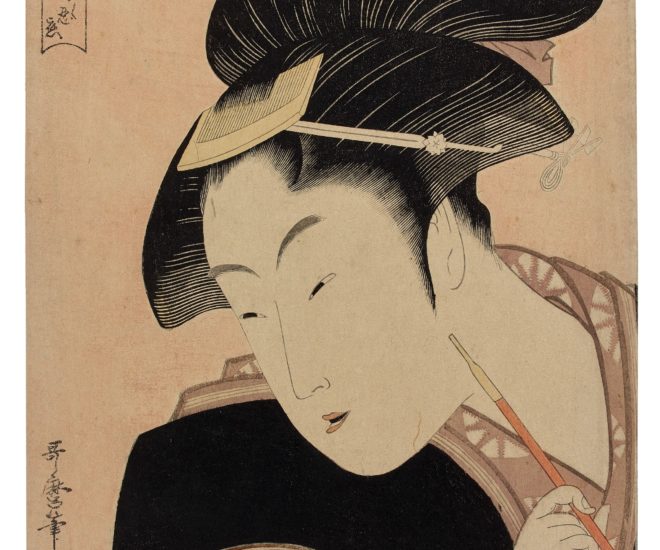 The Japanese art of woodblock printing has a very long history, with its fair share of masters whose work is in high demand from collectors . One of these masters was Kitagawa Utamaro, an artist nonpareil at the time for his beautiful depictions of women. At a Paris auction, held by the Beaussant Lefevre auction house in association with Christie’s, Utamaro’s sensual skill was brought to the forefront again with an auction of his ‘Deeply Hidden Love’ (Fukaku Shinobu Koi) print. It fetched around 745,000 euros, and went way beyond the initial estimate of 100,000 euros – setting a record for both prints of the Ukiyo-e genre, as well as prints by the artist of course.

Auction of the Portier Collection

The auction held in Paris was focused on Asian art and objects from a collection held by the Portier family – mainly consisting of Japanese earthenware including chawan (tea bowls) and kogo incense boxes. All 90 lots put up were sold after intense bidding, which is an extraordinary result. Some of the other major lots sold included a portrait of actor Tanimura Torazo created by artist Toshusai Sharaku (101,000 euros), and a bust of comedian Iwai Hanshiro by Utagawa Kunimasa (78,680 euros).

“(The Portiers’) expertise has been a reference for the Asian art market for the past four generations,” said the auction house in a statement.

There was also a set of eight exceptional Edo stamps that mainly depicted portraits of actors done by leading artists at the time. Each stamp was acquired by Henri Portier and his son Andre, major figures in the Asian art market in France, in sales at the Drouot auction house over the past century.

Compared with more popular forms of art like painting, the techniques behind woodblock printing are less known. It was a complicated process that involved three people working in tandem with one another. The artist himself usually only made the initial sketch of the final product, before sending it over to a carver to carve out the block, and a printer to apply inks to the block. Especially troublesome was the fact that each block could only be used for a single color (although some used blocks repeatedly to get special effects). Multiple woodblocks had to be prepared for a single print.

When the whole process worked out, under the conception of a skilled artist, you get the masterful combinations of color and form that characterize the best works in the medium. The powerful contrasts of blues and whites, for example, that blends together, for example, in Hokusai’s ‘The Great Wave Off Kamigawa’. Utamaro, on the other hand, was more focused on using those colors to create a light and idealized form of femininity – and captured subjects like courtesans and Geisha from the Yoshiwara district – or bustling scenes of human life.

The methodology of Japanese woodblock printing has fallen out of favor, especially in view of newer mediums like linocut and lithography (and not to mention digital printing today). Still, the effects and techniques achieved by the Ukiyo-e artists have inspired countless others in the East and West – including great painters such as Van Gogh, most famously. The prints are being perpetuated all over the globe and can gather up new fans over the years. Hopefully, that’ll continue.