A major oil painting by J.M.W. Turner sold Wednesday for $47 million at Sotheby’s in London, breaking a previous record for the artist. 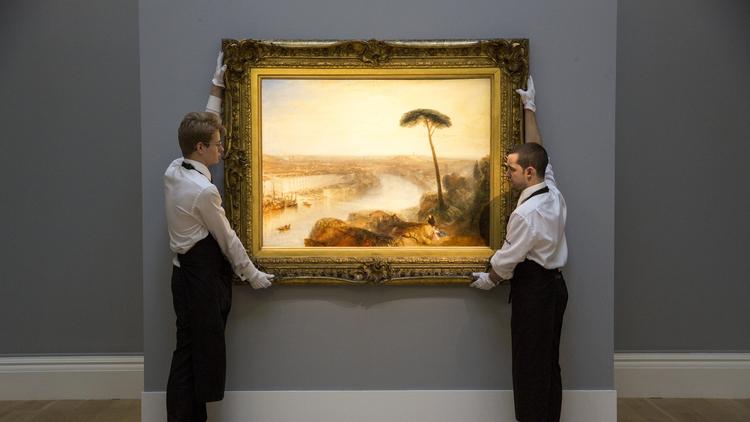 A major oil painting by J.M.W. Turner sold Wednesday for $47 million at Sotheby’s in London, breaking a previous record for the artist.

“Rome, from Mount Aventine” (above), depicting the river of the Italian capital bathed in morning light, was painted in 1835.

Four bidders competed for the 1835 painting, described by the auction house as one of Turner’s “supreme achievements”.

“This painting, which is nearly 200 years old, looks today as if it has come straight from the easel of the artist,” said Alex Bell of Sotheby’s old master paintings department.

“The hairs from Turner’s brush, his fingerprint, the drips of liquid paint which have run down the edge of the canvas, and every scrape of his palette knife have been preserved in incredible detail.”

It was the highest price paid for a pre-20th century work by a British artist and beat the previous record set for a Turner painting — £29.7 million paid for “Modern Rome – Campo Vaccino” in 2010 (below). Exhibited at the Royal Academy in 1836, the work was last sold in 1878, when it was bought from a friend and patron of Turner’s by Archibald Primrose, later to become British prime minister.

The sale comes amid renewed interest in one of Britain’s greatest artists, sparked by an acclaimed film biopic.

The biopic directed by Mike Leigh netted star Timothy Spall the best actor prize at the Cannes Film Festival for his portrayal of the artist.

A major exhibition of Turner, famous for his English landscapes and paintings of Rome and Venice, also opened at Tate Britain in September.