A supposed lost work by one of the biggest artists of all time has been debunked by a team of Van Gogh experts. The experts who discovered it disagree… 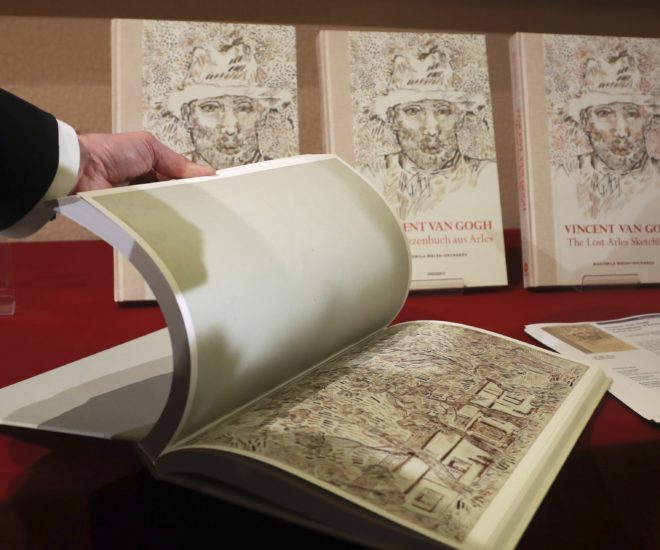 The discovery of 65 previously unknown drawings said to be by Vincent Van Gogh set off a bitter row about their authenticity Tuesday, with Amsterdam’s Van Gogh Museum dismissing as fakes what others hailed as one of the biggest art world finds in years.

In a damning statement, the museum claimed the contents of the “so-called lost sketchbook” unveiled by French publishers were imitations and “could not be attributed to Vincent Van Gogh”.

But the experts behind the discovery accused the museum of “jealousy”, and told AFP that “it was not the first time the Van Gogh Museum has got it wrong”.

The “lost” sketches come from the Dutch artist’s time in the southern French city of Arles, when he produced some of his greatest paintings, including “Bedroom in Arles”, “The Night Cafe” and “Still Life: Vase with Twelve Sunflowers”.

Seven of Van Gogh’s works are among the 30 most expensive paintings ever sold.

The museum’s dramatic intervention came as the respected French publishing house Le Seuil was unveiling copies of the sketches to reporters in Paris.

Its book reproducing the drawings, “Vincent Van Gogh, the fog of Arles: the rediscovered sketchbook”, is to be published across the world Thursday.

Its editor Bernard Comment stood by the authenticity of the drawings, claiming that the Van Gogh Museum had been wrong before and had dismissed work that was later proved to be his.

“They are the guardians of the temple, it is inevitable” that they would say that, he told AFP, but several other respected experts were convinced they were real.

“They should be a bit more modest, and show a little respect rather than engage in a slanging match,” he added.

According to Comment, Van Gogh made the ink drawings in the accounts book of the famous Cafe de la Gare where he stayed at various times between 1888 and 1890, towards the end of his tormented life.

They include portraits of his friends the artist Paul Gauguin and Pierre and Marie Ginoux, who owned the cafe.

Van Gogh immortalized Marie – with whom he had a strong bond – in one of his most famous paintings, “L’Arlesienne” (The Arles Woman).

“The Yellow House”, where Van Gogh later lived and rowed with Gauguin, was her former home.

It was after a fight with Gauguin on December 23, 1888, that Van Gogh cut off part of his ear.

Canadian Van Gogh scholar Bogomila Welsh-Ovcharov told reporters she “instinctively could not believe what she was looking at” when she first opened the ledger before slowly “realising what I was holding in my hands was without doubt a work of one of the greatest modern artists”.

British expert Ronald Pickvance claimed the book was “the most revolutionary discovery in the history of Van Gogh” studies.

Le Seuil described the sketches – which come from the most important period in the artist’s life – as “a very impressive ensemble” and insisted that “their authenticity is well established”.

It said that the ledger was found in the archives of the Cafe de la Gare, and was owned by “a woman of modest means” living in the south of France.

Most of the sketches are of the Provencal countryside around Arles where Van Gogh painted furiously during his year-long stay.

But in a lengthy and detailed demolition of the sketchbook, the Van Gogh Museum said its experts had long been aware of the notebook whose “provenance raises many questions”.

It said that having seen high quality photographs of 56 of the 65 sketches, its experts concluded they were not by Van Gogh.

“After examining a number of the original drawings in 2013, our experts did not change their minds. Their opinion… is that these album drawings are imitations of Van Gogh’s drawings.

“The experts examined its style, technique and iconography, and among their conclusions were that it contains distinctive topographical errors and that its maker based it on discolored drawings by Van Gogh,” the museum added.

Another clue it said debunked the notebook was that the drawings “are executed in brownish ink, and this type of ink has never been found in Van Gogh’s drawings from the years 1888-1890”.

The most expensive Van Gogh painting ever sold, the “Portrait of Dr Gachet”, which dates from this period, sold for $82.5 million (77 million euros) in New York in 1990. Experts estimate that it would go for more than $140 million today if it came to auction.