In his solo exhibition ‘Bao Bei’ (2005), Singapore artist Jason Wee recreates the interior of Kuo’s treasure chamber at The Substation in Singapore, adorning its walls and floors with over 100 colour photographs depicting gay male pornographic imagery. 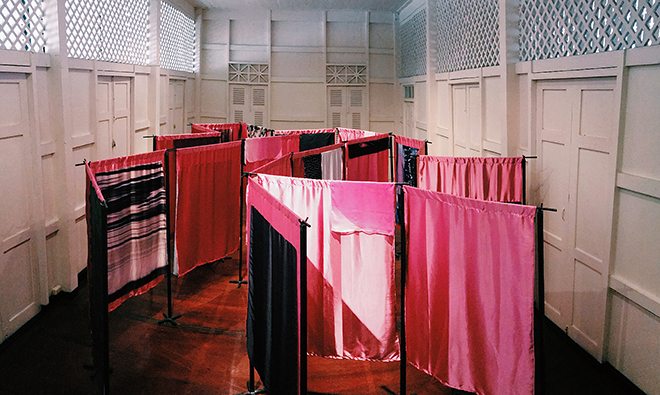 ‘Descendants of the Eunuch Admiral’ (1995) is a play by Kuo Pao Kun that revolves around Ming Dynasty admiral Zheng He who served in the Imperial Palace as a eunuch. A scene opens with boxes suspended in the air containing the penises of the eunuchs, and legend has it that as a eunuch gains wealth and prestige, the box would ascend accordingly. The playwright challenges his audience to think differently through his critique of contemporary life in Singapore by asking two questions: one, are we slaves to our materialistic aspirations, and two, are we also castrated beings? 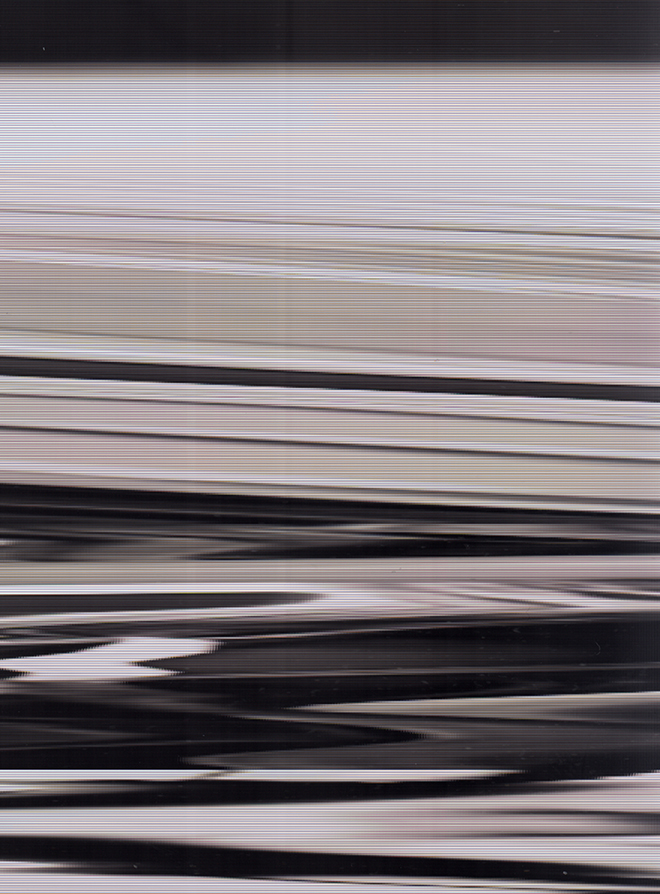 In his solo exhibition ‘Bao Bei’ (2005), Singapore artist Jason Wee recreates the interior of Kuo’s treasure chamber at The Substation in Singapore, adorning its walls and floors with over 100 colour photographs depicting gay male pornographic imagery. Like the boxes of penises suspended in the grandeur and loftiness of the Imperial Palace, Wee recasts these symbols of sexual ambiguity in a contemporary setting, literally framing aspects of gay culture and identity that tend to be ignored today. The “sex pictures” appropriated from websites and chatrooms are clearly homoerotic with some variants of light S&M play, such as the naked back of a man with jeans slipping down over his buttocks and another in only underwear performing a sex act on himself using black ropes. But the full spectrum of erotic subjects and unapologetic same-sex sexuality are obfuscated by a pixelated effect. In this manner, Wee juxtaposes the non- hierarchical and accessible nature of virtual platforms and gay spaces with Kuo’s monolithic, imperial structure of power and legitimacy in the form of censorship. It is also a pointed reference to the hetero-patriarchal system in Singapore which has yet to decriminalise homosexuality and where the subject of sexuality is still considered taboo in most circles.

Wee’s ‘Bao Bei’ is an exemplification of the nature of his writing, drawing, photography and installations in general, which seek to challenge the status quo and stay ahead of mainstream culture in order to shift preconceived attitudes. Since the early 2000s, his practice has reflected on the histories, myths and subjectivities of spaces, and how these are transitory in a way that can reveal opportunities for interruption and new experiences. Wee counters and questions dominant narratives of nation and national culture, and grapples with the complex issues of identity, sexuality and difference. While the references are never personal, Wee indicates that his identity does shape his work. On the word “queer”, he contends that it is about being different, choosing the an-Other alternative, and adopting new ways of thinking about relationality to one’s environment. 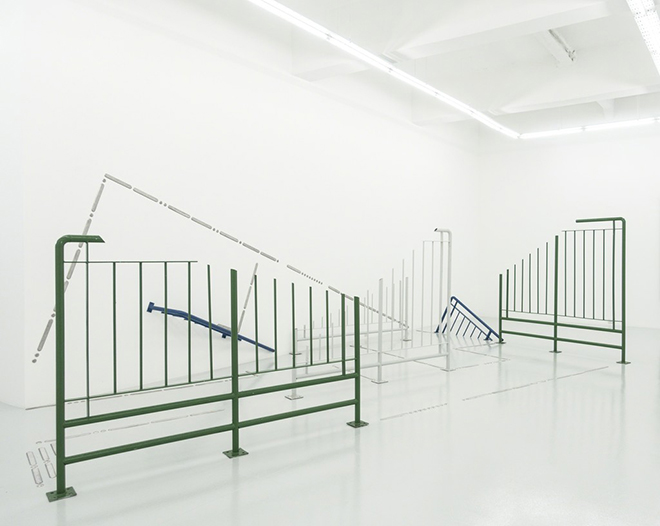 The digitally rendered “images at the margins” may exist solely in Wee’s head, with his imagination supplementing or removing what he would probably see on the maritime voyages of Zheng He. At the Australian High Commission in Singapore, his work is composed of nine ostensibly similar and striking black and white panorama photographs of the sea-level horizon and still-illuminated atmosphere. Yet individual displays differ markedly as the path of light changes, impacted by the variety of refractive atmospheric effects, and more importantly, one’s point of view. Wee’s photographic oeuvre thus encourages one to re-examine the significance of how different perspectives can both impact and illuminate objects in the world in relation to their surroundings.

These geographical imaginations of the artist are also linked to the subject of architecture. Attracted to Constructivism and the Minimalism, he often engages with modern architecture and investigates its limits. Wee’s musings on the future city led to his later output such as ‘Master Plan’ (2012) in which he presents a monochromatic “sculptural” case study of alternative urban living, which is at once a landscape of ruptures and flux as conceived for the Other. Highlighting shapes, the more than 240 different elements comprising shaded cubes, pyramids or dynamic forms rest on the floor, are propped against the wall, and even hang from the ceiling. Not just formal exercises derived from sculpture, architecture, and painting, they are also abstract reflections by Wee on the many intricate layers of a city, which include queerness straddling both private and public spaces. 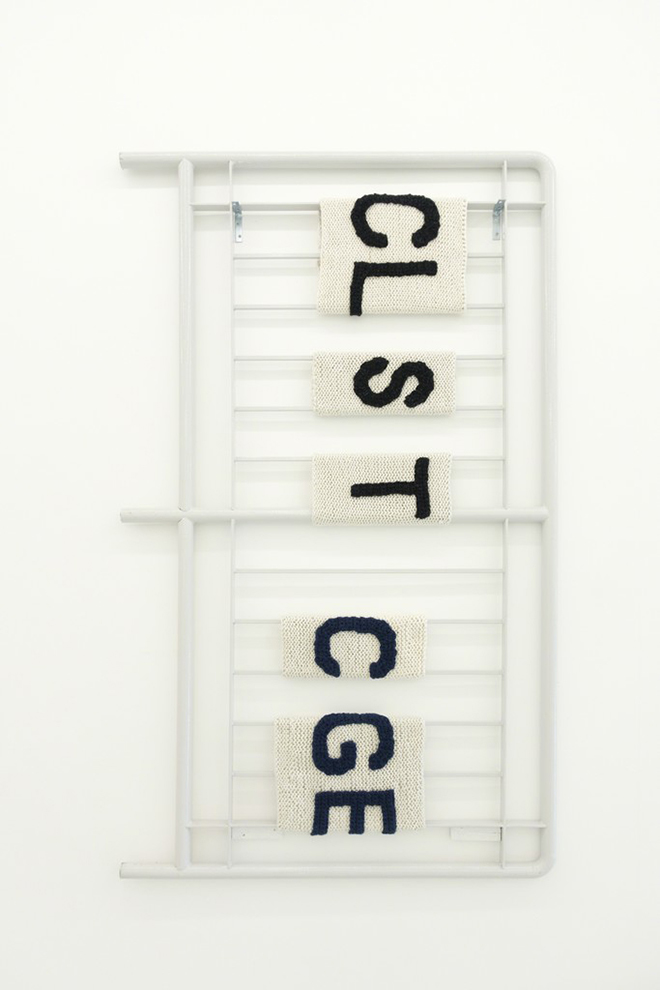 Another queer project that imagines slips and hauntings is his recent exhibition ‘Stand. Move. (A Labyrinth).’ (2017-2018). Think queer bodies moving through a myriad of places in Bangkok: in subways, back alleys, dance clubs, gay bars, public restrooms and parks. There is also an overt sensuality present in the work: the pink chiffon and polyester silk on twenty-six panels shimmer like a lake with every slight movement of bodies, near-abstract photographic imagery expose haphazard lines and patterned textures, and the formation of walls and barriers tease audiences with their hidden edges and corners. 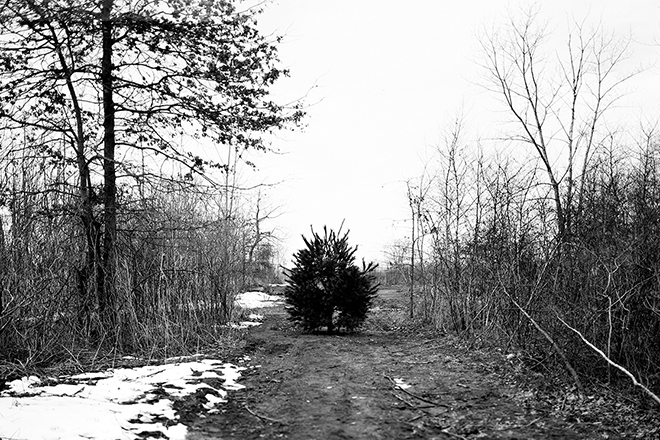 Back home, Wee is no stranger to working alongside and within Singaporean society and cultural politics, taking their languages, and adapting them to assert agency and articulate the voices and identity of gay individuals. In ‘Labyrinths’ (2017), the artist gives full play to the prevalence of censorship and control in the city-state. Here the visitor encounters every day and everywhere-ness of plastic barricades and green mesh fencings from public roads and pathways. At once physical and metaphorical, they function as metaphors for society, and the divisions and ruptures that occur. ‘Labyrinths (Out of the Closet, into the Cage)’ (2017) is a wall sculpture that reveals the different reactions by people to the fences put up by the government around the Pink Dot event, a public rally for the Singapore LGBT community.

Wee’s “queerness” resides not only in the domain of the sexual but in how he writes and makes art that is in touch with everyday life. In ‘The Monsters Between Us’, ‘Singapore Queers in the 21st Century’, and ‘Tongues’, Wee reflects on deviation and contemporary experiences that readers can easily identify with. His latest book of haikus, ‘An Epic of Durable Departures’ published by Math Paper Press, explores the friendship between Lee Wen and himself, strengthened by hardships such as the former’s struggle with Parkinson’s disease. Come July, Wee will also curate a queer art exhibition titled ‘The Direction I Rub One Matters’ at Grey Projects, exploring the role of the tactile, and of cloth which has to do with care and security, and often to do with intimacy. Wee says, “The sensations of cloth closely held against skin brings to the fore of our consciousness, our desire for and fears of mutuality, shelter, protection, and isolation.” 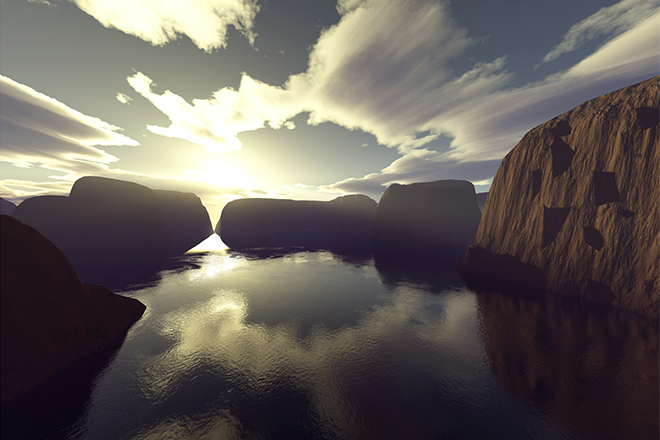 On his attitude about art, the artist says, “I really don’t believe that the artist as entirely mediated by a single and singular medium ever worked for me. My mind goes to five different places in a day”. Wee adds, “I think of art practice as an expanded field, and the artist as an aggregator of seemingly divergent images, ideas and outcomes, pulling these things into association and understanding, without forcing any kind of false harmony or unity.” If artists are the producers of new bits of knowledge, then art viewers are their inheritors. Wee’s queer art is an invitation for his audiences to expand their imaginations, as well as a challenge for them to adopt new modes of seeing, thinking and knowing.