French artist ZEVS was arrested in Hong Kong this morning, July 13th, 2009 at 3:49am after Liquidating the Chanel logo on the faÃ§ade of Chater House in Central. No news on whether heâ€™s been release yet or whether he will make it to the opening of the exhibit this Tursdayâ€¦ ZEVS is an anonymous French […] 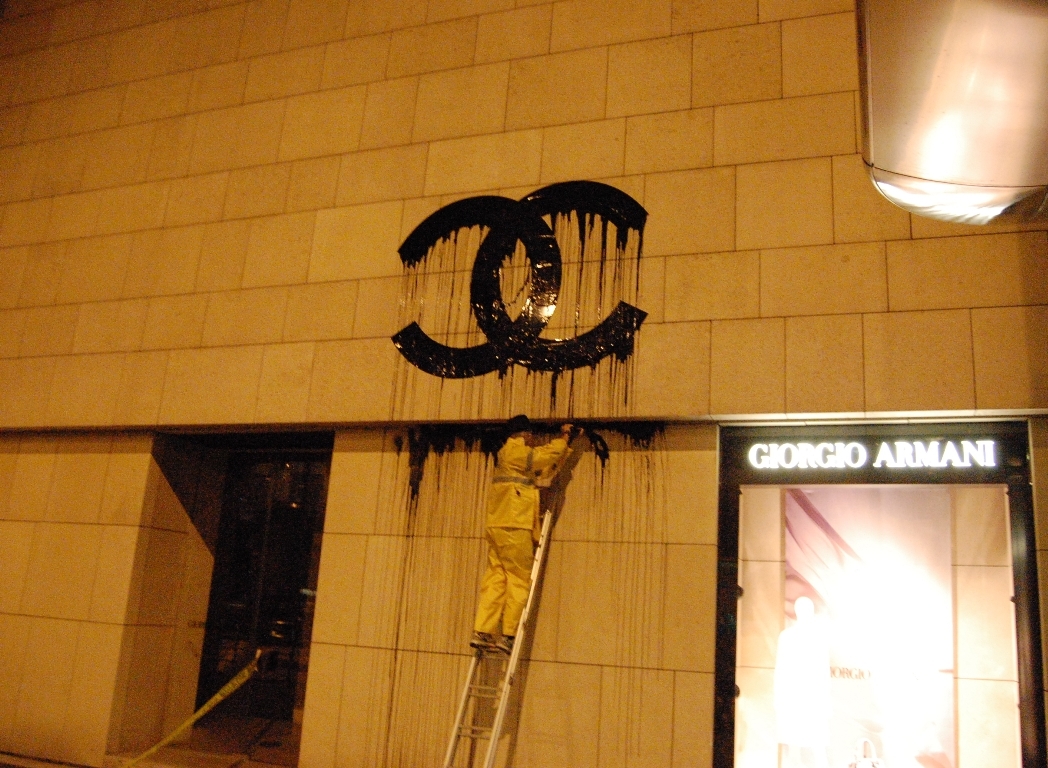 French artist ZEVS was arrested in Hong Kong this morning, July 13th, 2009 at 3:49am after Liquidating the Chanel logo on the faÃ§ade of Chater House in Central.

ZEVS is an anonymous French contemporary artist widely known for his LV, Chanel and other logo drippings.

He was an early and influential graffiti artist and active as a tagger in Paris in the 90â€™s.

Working with other French names of the second half of the 90â€™s, like Andre and Invader, ZEVS has been among the prominent figures who pioneered the French street art scene.

By the end of the 90â€™s he became known for his poetic drawings of shadows in Paris. Later he â€œbombedâ€ models on the billboards between the eyes.

Though his interventions have been very popular, it has been discussed in France whether it was vandalism or art.

In 2002 he cut out a model of a gigantic Lavazza poster in Berlin. Above the hole in the poster he wrote â€œVISUAL KIDDNAPPING â€“ PAY NOW!â€. ZEVS will produce in Hong Kong from July 1st until July 16th together with local craftsmen some paintings of LV and Chanel dripping logos on lacquer, the traditional Chinese way.

He will also create in the city some ceramic and produce some paintings on metal (the colorful LV dripping).

These works will be presented during the exhibition opening together with some serigraphy of other Liquidated Logos.

The series of Liquidated Logo paintings stems from ZEVS outdoor interference with headquarters of corporate brands such as Nike, Mc Donaldâ€™s, IBM and Coca Cola which all fall victims to the artistâ€™s signature style of liquidating brands by pouring colour down their logos.

This form of estrangement leaves the most powerful economic signature brand look as if it is melting, entrapped in an optically disturbing pattern of straight lines that recall barcodes.

The redesign of the Louis Vuitton logo by neo-pop artist Takashi Murakami is another one of ZEVSâ€™ objectives.

Yet in this instant the history of the emblem is the focus as the LV logo derives from the ancient Leonardo da Vinci monogram, LDV.

ZEVSâ€™ redesign of a Louis Vuitton bag on which the LV logo has been replaced by a suspiciously similar looking LDV logo set in dialog with an LV wall paper and liquidated LV paintings, pinpoints the discourse of appropriation and originality and creates works of art that are simultaneously unsettling, ironic, humorous and fancy.

Despite ZEVSâ€™ heavy critique on urban surroundings that are stodged with commercial adverts and restricted to adjusted behaviour, his work contains repulsion on the one hand but also a strong element of beauty and allure. Update (July 23) : The sentencing has been postponed until August 14th, the artist having to remain in Hong Kong until then, and he may face jail time.

Armani claimed damages worth around Euro 650â€™000 against ZEVS saying that the paint could not be removed as the stones of the faÃ§ade are lime stones and, thus, absorbe paint.

ZEVS has claimed all along, backed up by one of the most reputable historical monument cleaning company in Europe (who cleaned Le Louvre), that there was 100% chance to clean the stones.

ZEVS is awaiting to receive the chemical from Europe to clean the wall, if Armani agrees.