A new way of looking at the painter’s masterpieces may serve to shed light onto his genius. 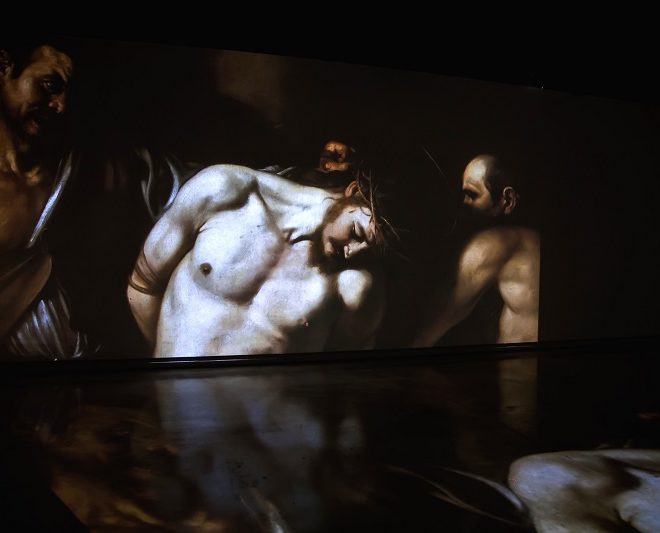 Within the walls of the Palazzo delle Esposizioni, running until July 3, fifty-seven paintings from the 16th century artist Caravaggio will be projected on high-definition projectors in a high-tech exhibition in Rome. This is all in a bid to allow the painter’s hyper-realistic and dark works to be fully experienced, down to the smallest sensory details. Whatever one might think of this spectacle, any staging of Caravaggio’s work in such quantity is rather staggering, considering his short life and relative scarcity of his surviving works.

Caravaggio was born in 1571 and had both parts artistic genius and rebellious vulgarity inside him. Throughout his life he painted great masterpieces but he also angered many with his antics and violent nature. This eventually culminated in his exile from Rome in the early 17th Century, when he killed another young man (though possibly unintentionally) and fled. He jumped from city to city until his death in 1610, under mysterious circumstances.

The paintings made within this period are some of his most brutal, including depictions of various tortures that Christ underwent, such as the crowning of thorns and flagellation. Psychological realism is brought into such scenes by his deft painting and knowledge of anatomy, and by his use of chiaroscuro, situating the bodies of such figures within his works in suffocating black spaces. This went against the Classical modes of drawing where bodies and forms were usually idealized and placed in their best possible light.

But his earlier work was still enamored with such brutal themes. In Cavaraggio’s “Judith Beheading Holofernes”, a depiction of another biblical scene, Judith is displayed in the process of killing Holofernes, an Assyrian general. The display of the act itself is stark and bloody, but Judith is shown to have a subtle mix of disgust and determination that never reaches into exuberance or overexaggeration. This will be one of the works displayed in the exhibit.

“It’s a theatrical staging of his work”, the installation’s designer and the founder of the Florentine outfit Stefano Fomasi told the AFP, saying the goal was to involve people “in a sort of collective rite by immersion in the art”. Another example is how, with Caravaggio’s depiction of Medusa, the snakes in her hair will appear to slither across the floor as the painting moves, the mythological monster’s horrified gaze amplified, her blood splattered widely across the walls. This “movement” is thanks to no less than 33 high-definition projectors employed in this exhibition.

The aim of setting the exhibition in the Italian capital’s historic center was to create an enormous stark white space to counterbalance the artist’s darkness, Fomasi revealed. “We wanted to replicate the elegance that Caravaggio has, the elegance of his painting, in the elegance of the space, which is very white, very bright,” he said.

Perhaps by exhibiting in such a way, a host of new viewers will be able to get more in touch with the internal landscape of the painter properly. His unforgettable depictions of violence and darkness will always serve as a reminder of the depths of brutality that can be reached within humans.